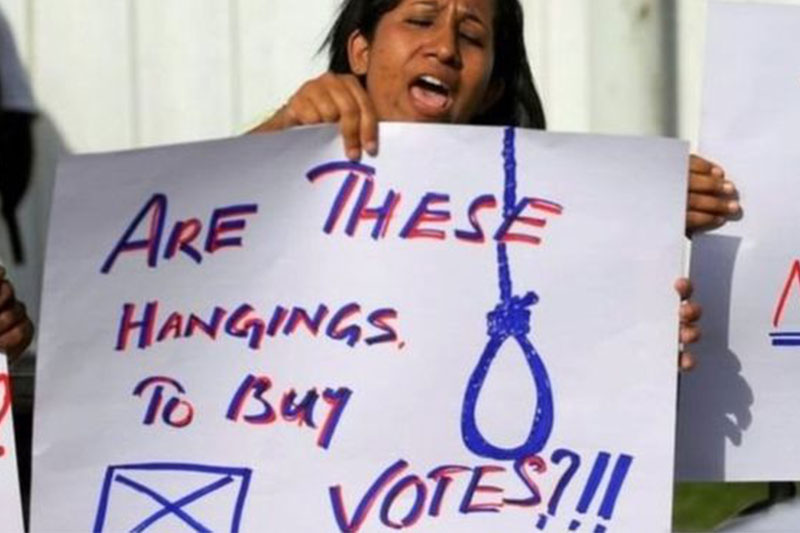 Sri Lanka Prisons Department is said to have hired two executioners. According to local English daily the ‘Daily News’, the duo were chosen as they had received the highest marks from the 26 individuals who had applied for the post.

Sri Lanka last executed a prisoner on death row over 43 years ago. Rape, drug trafficking and murder are punishable by death in the country. However, after 1976, the country has not carried out the death penalty.

Since his appointment, President Maithripala Sirisena has claimed he would carry out capital punishment to rid the country of the drug menace. As a result, applications for the post of executioner were called in February 2019. The Department had received nearly 102 applications and 79 were called in for interviews. Two citizens of the United States and two women had been among the applicants. A vacancy for the post was created nearly five years ago when the executioner at the time resigned while another individual was later hired. However, he had not reported to work thereafter.

Holding a meeting with Heads of Media on June 26, President Sirisena announced that he has taken steps to re-introduce the death penalty.

“I have already signed off on the execution of four prisoners who are on death row due to drug-related charges,” he said. “They have not been informed yet and neither have their names been revealed to stop any issues within the prisons”.

The President claimed that nearly 200,000 in the country are drug addicts and almost 60 per cent of the prisoners are incarcerated due to drug-related offences. However, some political critics claim the President’s approval rate will go higher due to this move.

The next Presidential election is to take place in December 2019. Currently, 1261 prisoners are on death row while some have appealed the decision. According to reports from the Department of Prisons, 297 inmates on death row are held at the Welikada Prison. 823 have appealed their death penalty sentencing. Among them 36 are women.

However, the decision made by the President to execute four prisoners has created a dialogue around the country. President's Counsel U.R De Silva, the former President of the Bar Association, has questioned the method used to choose the four individuals that are to be executed out of a large number of prisoners on death row. Speaking to ‘Neth News’, De Silva said there appears to be a procedural flaw in the process.

“According to 2018 records, 1299 are on death row. But after appeals, only 459 remain. Among these five are women while six are foreigners. How has he chosen four out of these?” he questioned.