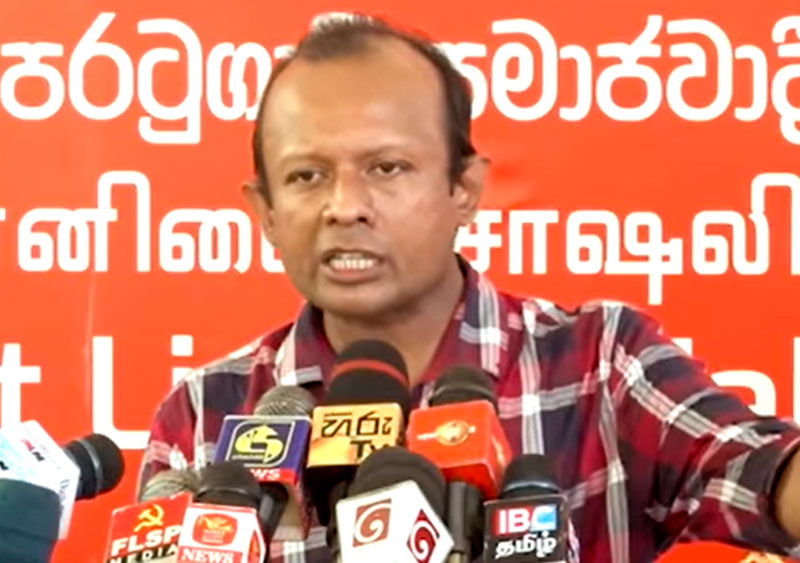 President Ranil Wickremesinghe had declared war on the 22 million Sri Lankans by his speeches to parliament on November 23 and 24, charged education secretary of the Frontline Socialist Party Pubudu Jayagoda.

“Ranil says he won’t let people protest. He also says he will not hold elections. The right to protest and the right to vote are guaranteed by the constitution. Does he expect the people to listen to him and cower in fear? He knows people are not afraid of him. That is why he is making such threats.”

Speaking to the media, Jayagoda described the president’s statements as being anti-democratic and arbitrary.

He refuted a claim by president Wickremesinghe that FSP’s Kumar Gunaratnam is a dual citizen and the party was behind the May 09 violence and the July 13 unrest near Parliament.

“Now he is alleging that we are responsible for the violence on May 09. This is completely false. If we had any connection to those incidents, he would not take it sitting down like this,” Jayagoda said.

It is hilarious to hear his asking the people to obtain a permit to protest against the government, the FSP activist said further.

“This war is between the people and the clan which is filled with fraudsters, murderers, robbers and the power-hungry. Innocent people fought against the corrupt parties. The Aragalaya was a fantastic uprising of the people. The fight must be completed, as an incomplete fight is a failure. The FSP will protect the Aragalaya from all forces.”

Jayagoda requested the people not to be frightened by such threats and stay strong to prove their mettle.