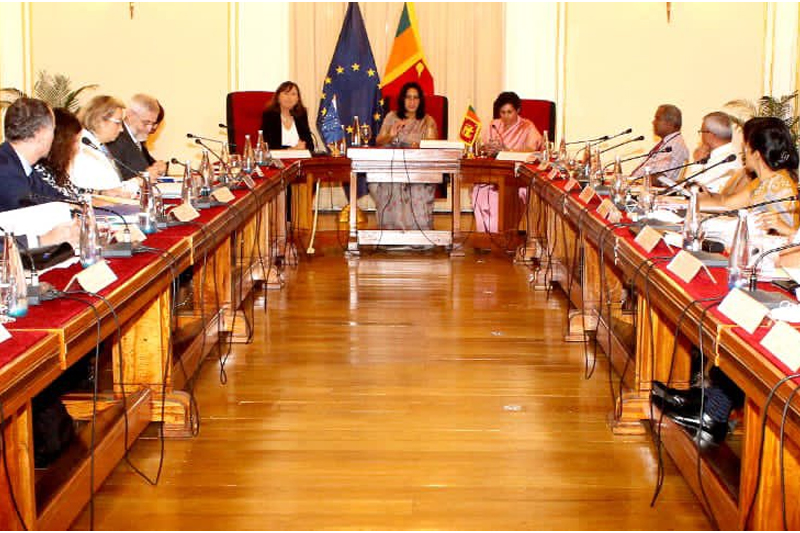 The European Union (EU) has encouraged tangible progress by Sri Lanka on its GSP+ commitment.

It comes in a joint press release following the sixth meeting of the European Union – Sri Lanka Working Group on Governance, Rule of Law and Human Rights that met in Colombo on October 28.

The Working Group meeting took place in the context of regular bilateral interactions between Sri Lanka and the European Union (EU). The full-day proceedings provided for a cordial exchange of views and experiences, in a spirit of cooperation and mutual respect. The two sides discussed the recent developments in Sri Lanka and the EU, and the implementation of relevant action and legislative initiatives regarding the promotion and protection of human rights. Sri Lanka briefed the EU on progress in reconciliation.

The EU re-affirmed its commitment to support Sri Lanka’s efforts to successfully overcome the current unprecedented economic crisis, including the necessary reforms and social protection measures, which would mitigate the adverse impact of the crisis and lead the country towards sustainable growth and prosperity. Sri Lanka and the EU reiterated the importance of social, economic and political inclusion through justice and reconciliation in the advancement of human rights.

Sri Lanka apprised the EU of the 21stAmendment to the Constitution, which is aimed at strengthening democratic governance and independent oversight of key institutions, public scrutiny, as well as anti-corruption measures, with the re-establishment of the Constitutional Council and Independent Commissions. In this context, the two sides discussed the importance of the separation of powers and checks and balances, and the ongoing work of independent institutions. The Working Group was also updated on the electoral reform process. In this context, the EU recalled the work of the 2019 EU election observer mission. The two sides reiterated the importance of the democratic freedoms of opinion and expression, and the rights to freedom of peaceful assembly and association.

The EU welcomed progress in the Justice Sector Reform Programme, which is funded by the EU, and will further improve access to justice and enhance human rights. Sri Lanka appreciated the support extended by the EU in this regard.

The EU acknowledged the steps taken by Sri Lanka in March 2022 to reform the Prevention of Terrorism Act (PTA), and pointed to the need for further action in line with its commitments. The EU expressed concern on the recent use of the PTA. Sri Lanka assured that the PTA has been invoked only in instances of extreme necessity.

The EU noted Sri Lanka’s update on the release of detainees under the PTA in 2021-2022, and encouraged the release of long-term detainees under the PTA who have not been charged. Sri Lanka expressed its strong commitment to prepare a comprehensive legislative proposal to replace the PTA in accordance with the Constitution, and in line with international norms and best practices, with a view to its finalisation in 2023.

Sri Lanka and the EU reaffirmed the importance of engaging civil society and giving it the necessary space to function in all its diversity. The EU expressed its readiness to continue supporting Sri Lanka in this process.

The two sides discussed the situation of minorities and the respective measures taken to address hate speech. They also exchanged views on the legislative and other measures taken to protect the rights of women and children, and action taken to advance labour rights including the elimination of child labour. The EU reiterated its call to de-criminalise same sex relations, and noted the Private Member’s Bill in this regard.

The two sides discussed cooperation in the UN Human Rights Council, including treaty bodies, special procedures and the universal periodic review process. The EU encouraged Sri Lanka to continue its engagement with the Human Rights Council and its mechanisms. The two sides also agreed to continue their cooperation in the framework of the 2030 Agenda for Sustainable Development.

The Working Group was updated on the GSP+ monitoring process and its requirements. The EU encouraged tangible progress by Sri Lanka on its GSP+ commitment.