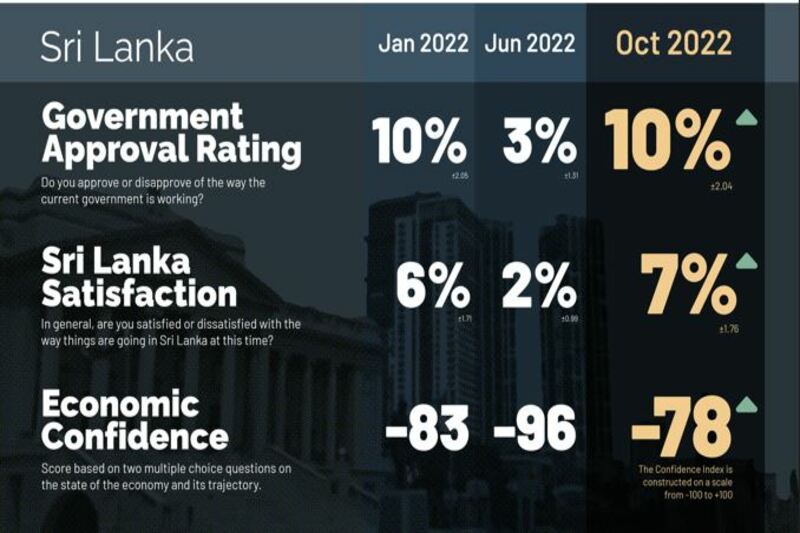 The government’s approval rating has moved up to 10% in October in comparison to the 3% reported in June 2022, according to the “Mood of the Nation” poll for October 2022 conducted by Verité Research.

The third round of the Gallup Style “Mood of the Nation” poll assessed the approval, satisfaction, and confidence of the nation in relation to the government, the country, and the economy.

Conducted as part of the syndicated survey instrument by Verité Research, it also provides other organizations the opportunity to survey the sentiments of Sri Lanka.

The results of the survey are as follows:

Government approval rating (10%)to the question, “Do you approve or disapprove of the way the current government is working?”

Only 10% said they approve.

This is the same extremely low level as it was in January 2022.

But it was an improvement from the 3% approval rating in June 2022.

Sri Lanka satisfaction (7%) to the question, “In general, are you satisfied or dissatisfied with the way things are going in Sri Lanka?”

Only 7% said they were satisfied.

Multiple choice questions on the condition and trajectory of the economy are used to generate an economic confidence score.

A score above zero means more people see the economic conditions positively rather than negatively.

If everyone thinks that the economy is in a poor condition (instead of good or excellent), and everyone also thinks it is getting worse (rather than better), then the score will be a (-) 100.

Implementation of “Mood of the Nation”

The poll is based on an island-wide nationally representative sample of responses from 1,018 Sri Lankan adults, conducted in October 2022.

The sample and methodology were designed to ensure a maximum error margin of under 3% at a 95% confidence interval.