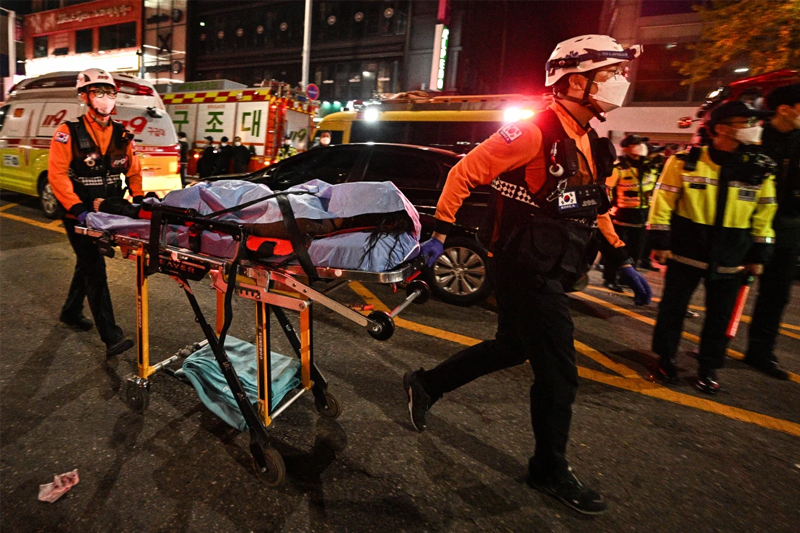 South Korea is searching for answers after Halloween celebrations in the capital Seoul turned into one of the country’s worst disasters, with authorities declaring a national mourning period as they investigate how a chaotic crush left at least 151 people dead.

Tens of thousands of costumed partygoers – mostly teenagers and young adults – had poured into the popular nightlife neighborhood Itaewon to enjoy South Korea’s first Halloween celebration since it lifted Covid restrictions such as crowd limits and face mask rules.

But the festivities descended into chaos, with photos and videos on social media showing huge crowds crammed into a narrow alley. Eyewitnesses described partygoers being packed so tightly together it was difficult to move around or even breathe.

Suah Cho, 23, described walking through an alley when “suddenly, some people started pushing each other, and people were screaming.” The screaming went on for 15 minutes, she said, adding: “It was just panic.” 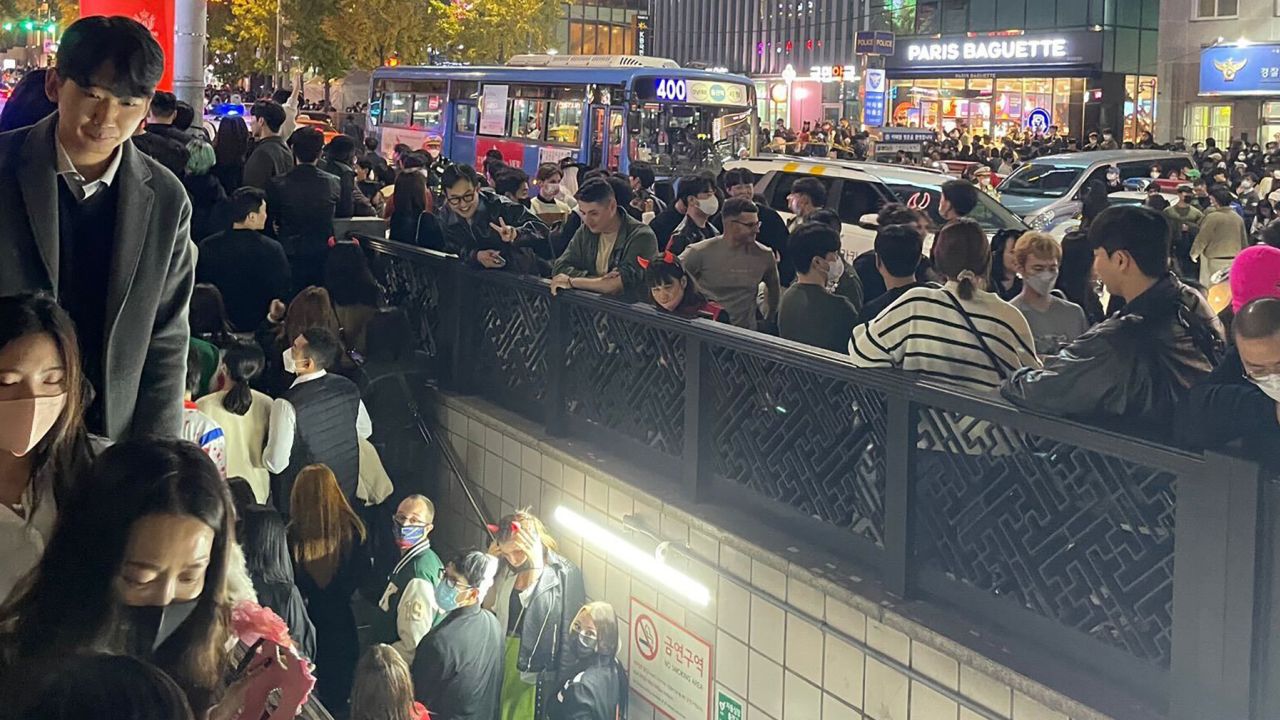 Authorities are still investigating what caused the incident, but Choi Seong-bum, chief of the Yongsan-gu Fire Department, said it was a “presumed stampede” and that many people fell, injuring at least 82.

The dead included at least 19 foreign nationals, including people from Iran, Norway, China and Uzbekistan, he said. One Thai national is among the dead, the Thai Foreign Ministry said.

The chaos of Saturday turned into shock and grief across the country on Sunday. Many victims’ families have gathered at a nearby center in Itaewon, where officials are compiling the names of the dead and missing as they race to identify bodies.

Crowds are seen in the popular nightlife district of Itaewon in Seoul on October 30, 2022. PIC: Jung Yeon-je/AFP/Getty Images

So far, more than 90% of those killed have been identified, said Minister of Interior and Safety Lee Sang-min in a briefing on Sunday. He added that about 10 people can’t be identified because some are under the age of 17 – too young to carry a national ID card – and others are foreigners.

One mother, Ahn Yeon-seon, told South Korean news agency Yonhap her 19-year-old daughter had gone out to celebrate with her boyfriend for one of their last dates before he left for mandatory military service.

Several hours after the couple left, her daughter’s boyfriend called crying, saying she had been “under a pile of people for over an hour and that he’d tried to pull her out but couldn’t,” Ahn said, according to Yonhap.

Since then, Ahn has been searching hospitals for her daughter, waiting for confirmation of what happened to her. “I’ll just keep searching,” she told Yonhap.

And, though the government has launched an investigation and promised new measures to prevent similar incidents from happening again, questions are emerging about how such a disaster could have occurred at all.

Cho, the 23-year-old who escaped the crush, said she saw no police or officials trying to control the crowd before the crush began. Even after they arrived later in the night, the sense of confusion and panic continued.

Authorities received the first emergency calls of people being “buried” in crowds at 10:24 p.m. in Seoul (9:24 a.m. ET). As the news broke, Yonhap reported that some people had suffered from “cardiac arrest,” with others reporting “difficulty breathing.”

However, officials said there were no gas leaks or fires on site.

Lee Sang-min, Seoul’s interior and safety minister, said on Sunday that “a considerable number of police and security forces” had been deployed to another part of Seoul on Saturday to deal with protests there.

Meanwhile in Itaewon, the crowd had not been unusually large, he said, so only a “normal” level of security forces had been deployed there.

But as the disaster unfolded, it prompted a massive response. More than 1,700 emergency response forces were dispatched on Saturday night, including 517 firefighters, 1,100 police officials, and about 70 government workers.

Social media videos showed police had taped off an area where people were performing compressions on other partygoers lying on the ground as they waited for medical help. Others showed people dressed in Halloween costumes lying on the street and on stretchers as first responders rendered aid and ambulances lined up to take away the injured.

“A tragedy that should not have happened occurred in the middle of Seoul last night on Halloween,” Yoon said. “I pray for those who died in an unexpected accident and hope that the injured will recover quickly.”

He also said the disaster would be investigated, with measures put into place to ensure similar incidents never happen again.

“We will have relevant ministries such as the Ministry of the Interior and Safety conduct emergency inspections not only for Halloween events but also for local festivals and thoroughly manage them so they are conducted in an orderly and safe manner,” Yoon said, adding that a “multi-purpose emergency system” would support both the injured and the families of the dead.

Foreign nationals among the dead

People fly into Seoul from all over Asia to celebrate Halloween in Itaewon, and this year’s event was seen as a welcome return of festivities after the pandemic. Hotels and ticketed events in the neighborhood had been booked solid ahead and large crowds were expected.

One eyewitness, Sung Sehyun, said the space was like a “jammed subway,” and that he had to push his way through the throng earlier in the night to get clear of the busy streets.

“I was lucky to get through (but an) hour later, I heard people got killed. Because people got stamped on … and people got jammed together,” he said

Juliette Kayyem, a disaster management expert and national security analyst for CNN, said the city’s density – and how common crowds are in Seoul – may have played a role in the tragedy.