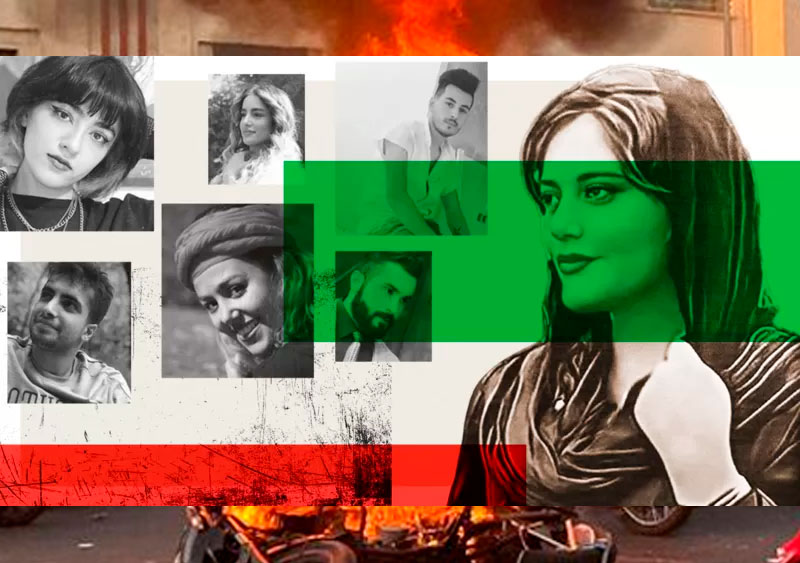 These are some of the schoolchildren and young people killed in protests sweeping across Iran - the boldest challenge to the Islamic Republic since its establishment, in 1979.

Iran's Human Rights Activists News Agency (HRANA) estimates 222 people have been killed in or after the widespread demonstrations sparked by the death in custody of Mahsa Amini, 22, detained for allegedly breaking rules on headscarves.

The authorities' strict control of information and independent reporting makes the number and identities of those killed hard to verify.

BBC News has used a variety of investigative techniques to name a total of 45 men, women and children who have died - many shot. Almost all of the Islamic Republic's previous protests have been about the state of the economy.

Now, in an unprecedented move, women, particularly young women, have taken to the streets - the slogan chanted at protests: "Woman. Life. Freedom."

But the security services have cracked down - and some women have been shot.

Nika Shakarmi and Sarina Esmailzadeh, both 16, were killed in capital Tehran and its surrounding area.

Ms Shakarmi went missing in Tehran, on 20 September, after telling a friend police officers were chasing her. A death certificate obtained by BBC Persia states she died after "multiple injuries caused by blows with a hard object".

Human-rights groups say Ms Esmailzadeh, a YouTuber, died after being beaten by security forces armed with batons on 23 September.

Women in their 20s and 30s have also been killed, as has Minoo Majidi, 62, in Kermanshah, western Iran.

How BBC News identified the victims

Information is heavily restricted in Iran. The internet is censored, regularly slowed down and even stopped.

According to the International Federation of Journalists, 24 reporters have been arrested since the demonstrations began.

There is also a very strong online disinformation campaign run by the authorities to discredit organisations trying to find the truth.

Journalists from the BBC Monitoring, Disinformation and Persian teams used names from trusted sources, including human-rights groups already verifying identities, and matched them to social-media posts from them or their family.

They closely examined audio-visual material, such as images and footage of deaths, burials and funerals, and cross-referenced it with death certificates and official online records.

Some of the families, under pressure not to speak to journalists, have also been contacted in confidence.

On the streets and in schools across Iran, young women and schoolgirls have been burning their mandatory headscarf - a direct challenge to the clerical establishment's ideology.

Girls who recorded and shared videos of themselves removing their headscarf in class have taken to the streets and become a key part of the movement, which is predominantly led by university students.

Such protests by high-school pupils are unprecedented.

A number of children were killed on 30 September in Sistan Baluchistan province in the south-east, home to many people from the Baluch ethnic group.

Amnesty International has accused Iranian authorities of killing dozens of people that day, firing live ammunition in a move that shocked the country.

People from regions with high numbers belonging to ethnic minorities

BBC News has confirmed deaths across the country but people belonging to ethnic minorities, who have long faced repression and political violence, have been targeted.

As well as groups killed in Sistan Baluchistan province, BBC News has identified people killed in areas with high numbers of Kurdish people, where tensions have been particularly high. They include:

in Kurdistan province, western Iran, Reza Lotfi, in his 20s, Mohsen Mohammadi, 28, Fereydoun Mahmoudi, 32, and Foad Ghadimi, in his 40s

Ms Amini, who died in custody on 16 September, three days after her arrest, was an Iranian Kurd.

When mapped, all the deaths verified by the BBC span the country, but with clusters in the north west, around the capital Tehran and in south-eastern Sistan Baluchistan.

Members of the security forces

The government has denied killing "peaceful" protesters and said more than 20 security personnel have died.