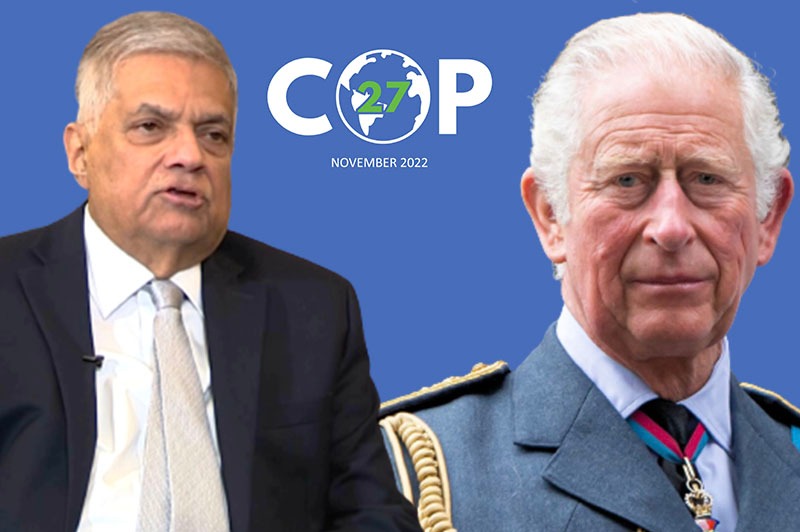 President Ranil Wickremesinghe, in an interview with Pasini Withanage on The Leader YouTube channel on Thursday (13), emphasized the importance of King Charles III attending the United Nations Climate Change Conference (COP27) scheduled to be held in Egypt from 6 – 18 November 2022.

The President made this observation in response to a statement made by Buckingham Palace on October 02 which stated that a decision had been made for King Charles III not to attend COP27.

The President of last year’s summit and member of Liz Truss’s Cabinet Alok Sharma however had stated that King Charles III should attend the upcoming climate change conference. Sharma was responding to a report which claimed British Prime Minister Liz Truss had ordered the king not to attend the conference.

According to British news reports, the King- then the Prince of Wales had indicated he would attend the annual conference.

King Charles III has been a staunch climate action advocate with a long history of campaigning to reduce the effects of climate change and made a speech during the opening of last year’s summit.

President Wickremesinghe, who recently appointed former Norwegian Minister of Environment Erik Solheim as his international advisor on climate change, is expected to attend COP27 in Egypt next month.

The full text of the interview is as follows;

Q. Why is Sri Lanka placing so much importance and emphasis on climate change, especially during the economic crisis?

A. Well, if you are looking at the economic crisis, we have to emphasize climate change because today the economy and climate change are interlinked. We have to recover from this position. There must be economic development in the country. We have to go ahead. Then, our economy now must be on the lines of a green economy. That's what everyone else is doing in the world. We can't be outside that. Secondly, tremendous potential Sri Lanka has as a green economy. We’re getting into renewable energy. There are many other fields in which Sri Lanka can really benefit and we should go ahead.

Q. What are some of the initiatives that Sri Lanka has put in place, or is planning to put in place to address climate change?

A. Actually, we haven't done much after COP26 due to the political instability in Sri Lanka, but we do have a plan. Our framework will take into account the 2015 Paris Climate Agreement we signed, the decisions taken at COP26, and the Commonwealth Heads of Government resolution on climate change. We are also looking at the blue economy. So within this framework, we'll be working out our initiatives, and the potential we have. The steps we had to take. We even had to look at the water at some stage, degraded soils and reforestation. But in addition to that, I feel there has to be capacity building not only for Sri Lanka but for our whole region. We are also proposing 1s a climate change university which will be devoted to capacity building among the officials and the activists involved in climate change.

Q. You mentioned the COP summit. It has been announced that you will be attending the COP27 in Egypt next month. What is the government hoping to achieve by attending the summit?

A. No, we want to play our role there because we are very concerned as an Indian Ocean island nation, about the impact it can have on us. And we should also work together with India, especially in places like Tamil Nadu. A lot is being done on climate change. I also want to get support for the climate change university which we have been advocating. So we are going ahead and I’ve asked the former President of Maldives, Mr. Mohamed Nasheed, to act as my special envoy on climate change. He has been visiting several countries and Mr Eric Solheim came as an advisor, on both our legislation as well as the climate change university.

A. Well, 2015 was a really important one, when it came to the climate change agreement, and certainly 26 is very important. We have to follow up on COP26. Some of these countries have fallen behind or they've sort of retreated from the position they have taken. This is why COP27 is important. The President of Egypt had invited King Charles III to come and address COP 27. I also think it's very important. Unfortunately, there seem to be some issues in the UK about him attending COP27. I can't talk of the UK, but talking as a member of the Commonwealth, King Charles is the head of the Commonwealth and last February at the CHOGM, we passed a resolution on climate change. Therefore, he should be here. I think the UK government should reconsider it and enable him to be in Egypt for COP27 because he has an important role to play.