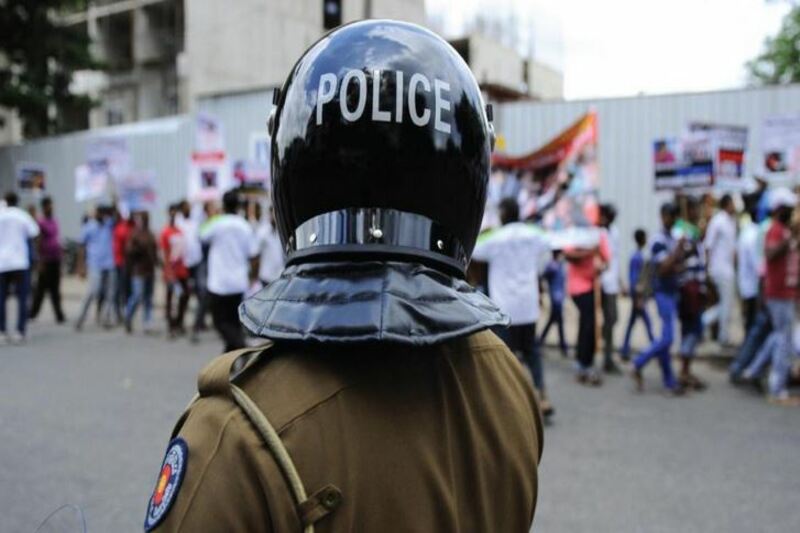 A media organisation has requested the Inspector General of Police (IGP) to arrest police officers responsible for the alleged assault on peaceful protestors gathering at the Galle Face Green to remember the southern activists who died recently during the anti-Rajapaksa government protests.

Sri Lanka police, who have been disrupting the commemorations of the North and East Tamil people - including at Mullivaikkal - together with the security forces for many years, were seen on October 90 in Colombo harassing the crowd including women and children who had come to the Galle Face Green to pay their respects.

In a letter to the police chief Chandana Wickramaratne, Sri Lanka Young Journalists' Association (YJA) requested an investigation on police officers including Assistant Superintendent of Police (ASP) Nalin Dilruk, over the attack.

“We have requested the Special Investigation Unit of the police to carry out an impartial investigation on Officer In charge (OIC) of Fort Police station Sagara Liyanage, ASP Nalin Diruk, and the Senior Superintendent of Police (SSP) Roshan Dias, arrest them and produce them in courts, file criminal charges and conduct a simultaneous disciplinary inquiry against them,” Tharindu Jayawardena, the President of the Young Journalists Association (YJA),

Tharindu Jayawardena, the President of the Association, points out to the IGP that a group of police officers who stormed into a peaceful protest and commemoration of the dead at the Galleface on October 09 disrupted it and treated the participants "cruelly, inhumanly and humiliatingly".

Further, the letter stated that, when the right to the freedom of speech is protected by the constitution, the Sri Lanka Police not only took that away from people but also assaulted the peaceful protestors and arrested the group of peaceful protestors including a school student.

“ASP Nalin Dilruk and other police officers harassed a couple with a child and a mother who were there with a girl child. Not only was it that they arrested a student who was giving live updates on social media, they kept him in custody for hours. In the same way they arrested a group of peaceful protestors,” he noted.

YJA emphasised that the video footage which was taken on that day clearly shows that these police officers not only violated fundamental rights but also committed offences under the convention on torture and other cruel, inhuman and degrading treatment under the penal code.

Journalist Tharindu Jayawardena has further informed that YJA is ready to submit evidence to support the investigation.