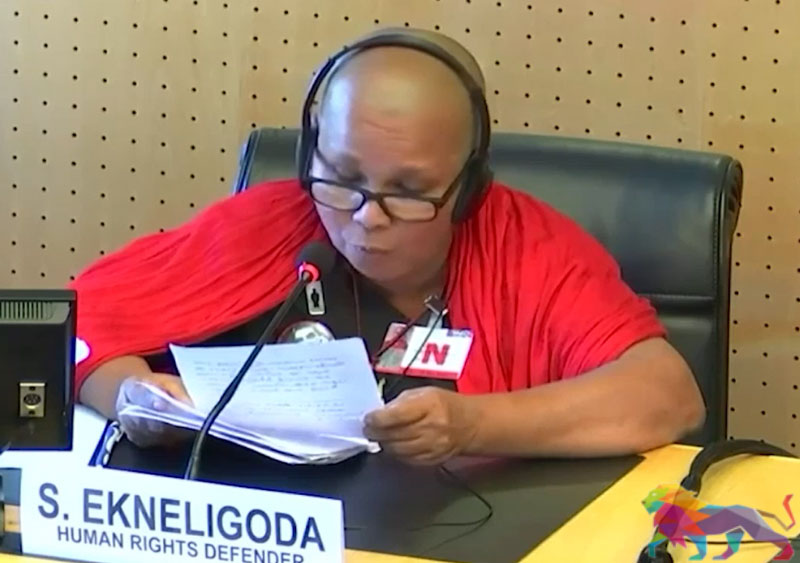 Sandya Ekneligoda, the wife of missing journalist Prageeth Ekneligoda, has accused the government of adopting impunity as its unofficial policy relating to human rights in Sri Lanka.

“In a country where impunity is the unofficial adopted policy consisting of a slow and lagging legal system, in the midst of poverty, constant pursuit, and intimidation, the only thing the victims can do now is to cry out and lament while engaged in a constant struggle on the country’s streets,” she has told the 23rd session of the Committee on Enforced Disappearances in Geneva.

In her address, she called on the Committee to intervene in providing Sri Lankan victims of enforced disappearances with a legal mechanism that would not only gain the trust of the victims but would also finally deliver the truth and justice.

Ekneligoda detailed the many obstacles and incidents of harassment she faced at the hands of the government, military, police and other institutions since her husband’s abduction on January 24, 2010.

She said under these dire circumstances, the main challenge now is if justice will be delivered as the fate of the legal case relating to her husband’s disappearances is now in limbo.

“Can it be expected that the current president while as prime minister in 2017 who irresponsibly claimed ‘all disappeared persons should be assumed dead or are abroad’ will deliver justice?” she asked.

Ekneligoda revealed that following Gotabaya Rajapaksa’s election as President, a commission was appointed to look into cases of political revenge.

“This commission turned the investigators and witnesses of the case into the accused.

“It violated orders of the High Court and obtained statements from witnesses only to in the end recommend the military suspects of the case be released and acquitted of all charges,” she charged.

Ekneligoda also highlighted the obstacles faced by mothers and other family members of missing persons to find answers while engaging in a continuous struggle.

She expressed her disappointment at the Office of Missing Persons and said the office was unable to even gain the trust of the families affected.