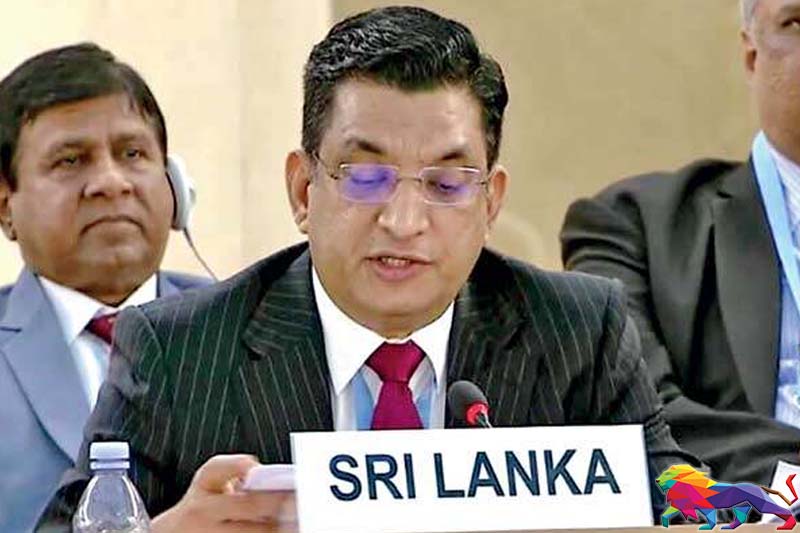 He also said the government is extremely sensitive to the socio-economic hardships faced by the people, and has initiated immediate multi-pronged measures to address the challenges and to ensure their wellbeing through the provision of supplies essential to the life of the community.

“Notwithstanding the severe constraints and challenges, Sri Lanka remains firmly committed to pursuing tangible progress in the protection of human rights and reconciliation through independent domestic institutions.”

“A staff level agreement has been reached with the International Monetary Fund, and discussions on debt restructuring are in progress. The government is in dialogue with UN agencies as well as bilateral partners to protect the most vulnerable from the adverse impacts of the crisis,” he said.

The minister also said that while issues of reconciliation and accountability are being comprehensively addressed through a domestic process, it is time to reflect realistically on the trajectory of this resolution which has continued on the agenda of the Council for over a decade, and undertake a realistic assessment on whether it has benefited the people of Sri Lanka.

“Once again, we are compelled to categorically reject any follow-up measures to the resolution, as well as the related recommendations and conclusions by the High Commissioner.”

“The recent changes that have taken place bear testimony to our continued commitment to upholding our longstanding democratic principles and norms. The constitutional rights to peaceful assembly and expression guaranteed the democratic space for our people to exercise their rights.”

“In this regard, transgressions of the law resulting in criminal and unlawful activity were addressed in accord with the law and the Constitution, in circumstances where such freedoms were abused by elements with vested interests to achieve undemocratic political ends.”

Sabri also said the proposed 22nd Amendment to the Constitution introduces several salient changes which would strengthen democratic governance and independent oversight of key institutions, as well as public scrutiny, participation in governance, and combating corruption including the constitutional recognition of the United Nations Convention Against Corruption (UNCAC).

The Sri Lankan government delegation to the UNHRC session also includes justice minister Wijedasa Rajapakshe and officials of the Attorney General’s Department and the Foreign Ministry.

Lawyer Nuwan Bopage, addressed the UNHRC session on behalf of the Asian Forum for Human Rights and Development.

He said, “As the High Commissioner’s report makes clear, the current, unprecedented economic crisis is due in part to long standing problems.”

“Systematic subversion of key accountability processes, the rule of law and independent human rights institutions, including through the 20th Amendment to the Constitution, as part of the government’s deliberate attempts to avoid accountability for war time atrocities created conditions for corruption, abuse of power and prolonged mismanagement of the economy that are at the root of the current crisis.”

He charged the government’s violent response to popular protests in the wake of the economic crisis leaves no room for any optimism about the prospects of meaningful human rights and democratic reforms and accountability under the administration of President Wickremesinghe.

“Many peaceful protestors including artists and social activists have been arrested since the new president assumed office. The Wickremesinghe administration has arbitrarily detained several people including Wasanth Mudalige, Hashan Jeewantha and Galwewa Siridhamma Thera, for their alleged involvement in the recent protests under the draconian Prevention of Terrorism Act (PTA), contradicting the de facto moratorium on the use the PTA announced by the government at the 50th session of this Council.” Meanwhile families of victims of enforced disappearances have faced routine harassment and intimidation as they continue their over 2000 days long demonstration demanding to know the fate of their loved ones.

In this context, it is imperative that the Council adopts a resolution that enhances scrutiny of the situation and advances accountability for war time atrocities and economic crimes that are at the root of the current crisis as well as the Easter attacks by strengthening existing measures to collect and preserve evidence and adopting new initiatives such as an expert mechanism on Sri Lanka, Bopage added.

India on what it wants Sri Lanka to do

Meanwhile, India's permanent representative to the UN in Geneva I.M. Pandey noted with concern the lack of measurable progress by the Government of Sri Lanka on their commitments of a political solution to the ethnic issue- through full implementation of the 13th amendment of the constitution, delegation of powers to provincial councils and holding of provincial council elections at the earliest.

“India’s view on peace and reconciliation in Sri Lanka had been for a political settlement within the framework of a united Sri Lanka, ensuring peace, equality and dignity for the Tamils of Sri Lanka,” he said.

The operationalization of provincial councils through early conduct of elections will enable all citizens of Sri Lanka to achieve their aspirations for a prosperous future, said the Indian official.