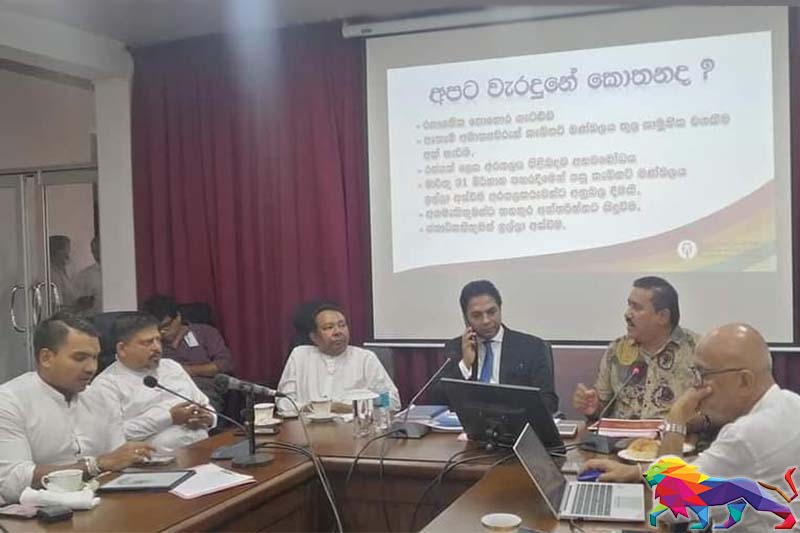 The Sri Lanka Podujana Peramuna (SLPP) has had an internal dialogue on whether it was a mistake for Gotabaya Rajapaksa to resign from the executive presidency.

A photograph of the said discussion presently in circulation in social media indicates that in a digital screen displayed above.

Chaired by SLPP general secretary Sagara Kariyawasam, it was attended by Namal Rajapaksa and many others.

What had gone wrong for the SLPP after having claimed the executive presidency and majority power in parliament had come under discussion there.

Six reasons have been cited – the chemical fertilizer issue, certain ministers disregarding the cabinet’s collective responsibility, the government’s failure to understand the people’s struggle, cabinet’s resignation following the Mirihana incident on March 31 as well as the resignations of the prime minister and the president.

According to political sources, the SLPP is presently summoning chairmen of local government bodies to discuss preparing the party for the future.

In a facebook posting, Press Council chairman Mahinda Pathirana has commented about the said photograph of the SLPP meeting.

He says the photograph has gone viral and the opposition had strongly attacked it, showing that the SLPP is still the most powerful party in Sri Lanka.

Part of a series of internal meetings, the discussion in Nuwara Eliya on August 30 was attended by activists from four districts.

In the morning, it was chaired by Basil Rajapaksa, and by Kariyawasam later in the day, Pathirana says.

The Press Council chairman goes on to say that he too, was there – confined to a corner, just like Namal was.

He concludes by saying that the message that the SLPP is a disciplined, professional party that thinks and discusses anew about the recent political developments will be taken to the people.