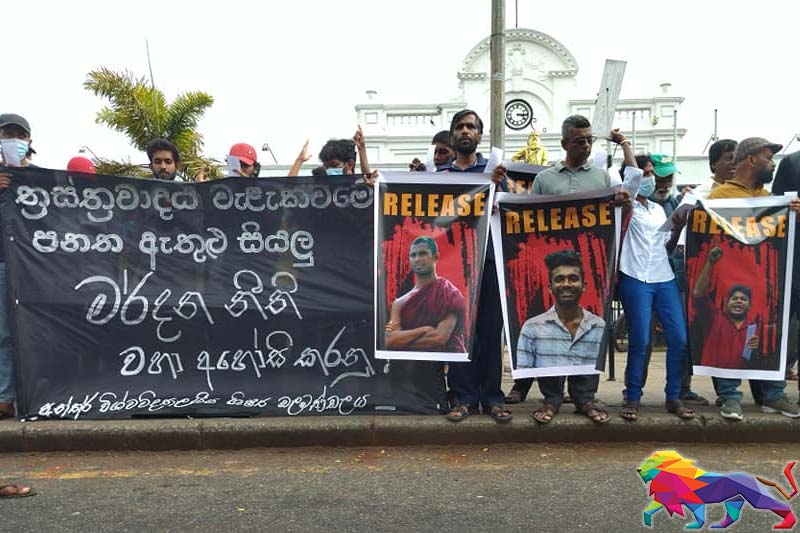 Three leading student activists have been referred to the TID in Narahenpita for questioning on a 90-day detention order.

The trio are presently under interrogation at a detention centre in Tangalle.

As the defence minister, president Ranil Wickremesinghe yesterday (22) signed an order for their detention. During the period of their detaining, closest relatives are allowed once-a-week visits, from 9.00 am to 4.00 pm, and they are required to prove their relationship through the Grama Niladhari of their area.

The IUSF yesterday complained to the Human Rights Commission against the detentions and said their lives are in danger.

Also, it handed over a petition to the UN office in Colombo with regard to their being branded terrorists and detained without being presented before a court of law.

Are the protestors terrorists?

With these detentions, social media has taken up for debate as to whether the protestors are terrorists.

There are various definitions of terrorism.

A senior police officer on condition of anonymity said the investigators have not been given a proper definition of ‘terrorism’ by the legal authorities.

President’s counsel U.R. de Silva has told Neth News about how the defence minister is empowered to order the detention of a suspect arrested under the PTA.

Details of the person under detention should be submitted to the magistrate’s court as well as to the relatives of the suspect, said de Silva.