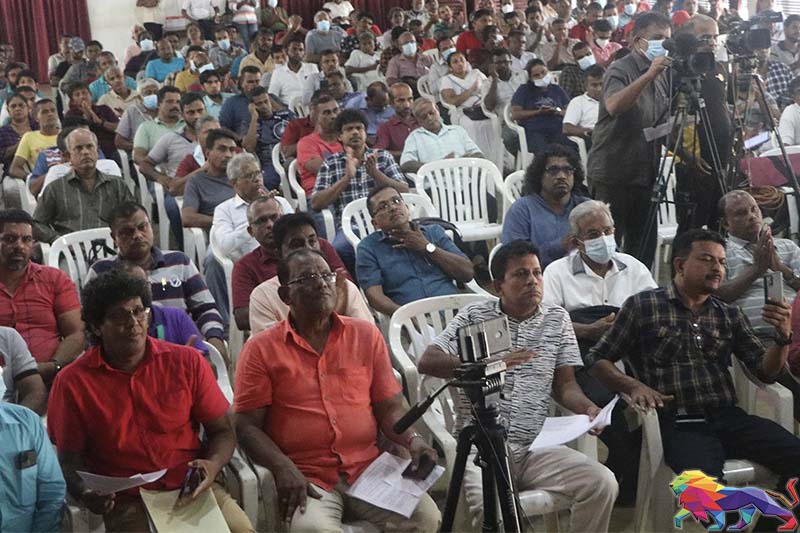 Trade unions have put forward a set of proposals to resolve the prevailing conflict in the country that wants acting president Ranil Wickremesinghe to leave office and an interim government formed for a six-month period during which an election is held.

Another suggestion is that the protestors who forced Gotabaya Rajapaksa out of office should be given representation in state administration.

The Trade Unions Coordination Centre (TUCC) launched the proposals on July 17 at the auditorium of the Public Library in Colombo in the presence of representatives of TUs and people’s organizations.

Its proposals to a government that will be formed on a short-term basis is that the cabinet should have a maximum 15 members, and that the president and all the MPs should receive their salaries only, minus allowances.

Price reductions for essential foodstuffs, ready availability of fuel, LP gas, medicines and other essentials as well as fertilizer, pesticides as well as raw materials and equipment for the industries and a six-month grace period for the repayment of loans given for self-employment, agriculture and fisheries and leasing are among the other proposals.

Also, the cancellation of agreements for the sale or leasing of public property, abandoning the moves for the formulation of new laws to curtail labour rights, salaries and pensions and to remove public servants are included, in addition to the introduction of laws to grant leave for the private sector employees to cast their votes at elections, removal of legal obstacles against increasing the pensions and wages of estate labourers and ensuring their facilities.

A representation for GotaGoGama

The formation of a citizen’s council with the membership of trade unions, students, farmers, fishermen, professionals and other people’s organisations involved in the ongoing struggle, in state and civil administration is another proposal.

Furthermore, all state and semi-government institutions should be supervised by a legal mechanism involving the TUs as well and a parliament-approved regulatory body, with registered TUs as members, formed for the amendment of labour laws, salaries, pensions and the EPF and ETF that directly affect the public.

The TUCC also proposed an accelerated programme to ensure justice for the lives lost and the injured during the public struggle and the releasing of those arrested unlawfully.