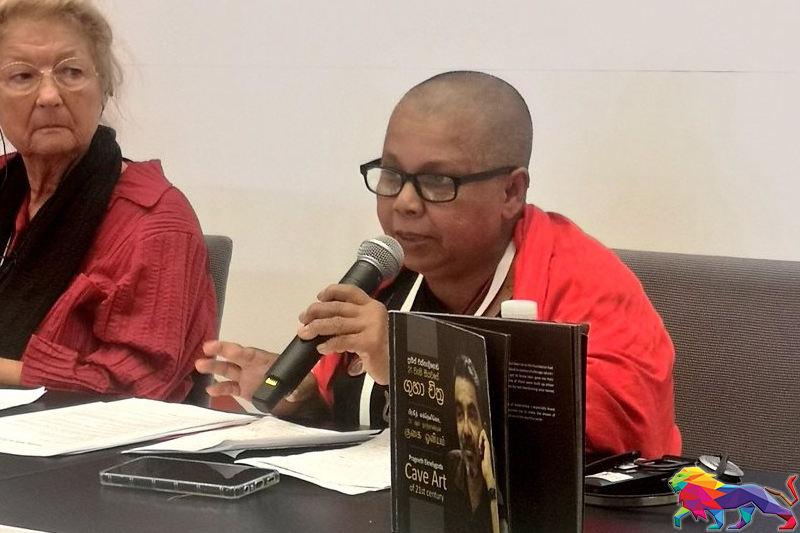 At the 31st World Congress of the International Federation of Journalists (IFJ), Sandhya Ekneligoda, the wife of missing journalist, Prageeth Ekneligoda, spoke against impunity for the officials who are responsible for the disappearance of her husband.

The full text of the statement is found below.

"Dear colleagues of the IFJ, first I need to give my heartiest thanks to you for this opportunity.

There are many brave journalists in Sri Lanka who have handled their pens and brushes against injustice.

I will start my speech with my remembrance of the journalists who faced persecution, disappearance, and were killed. 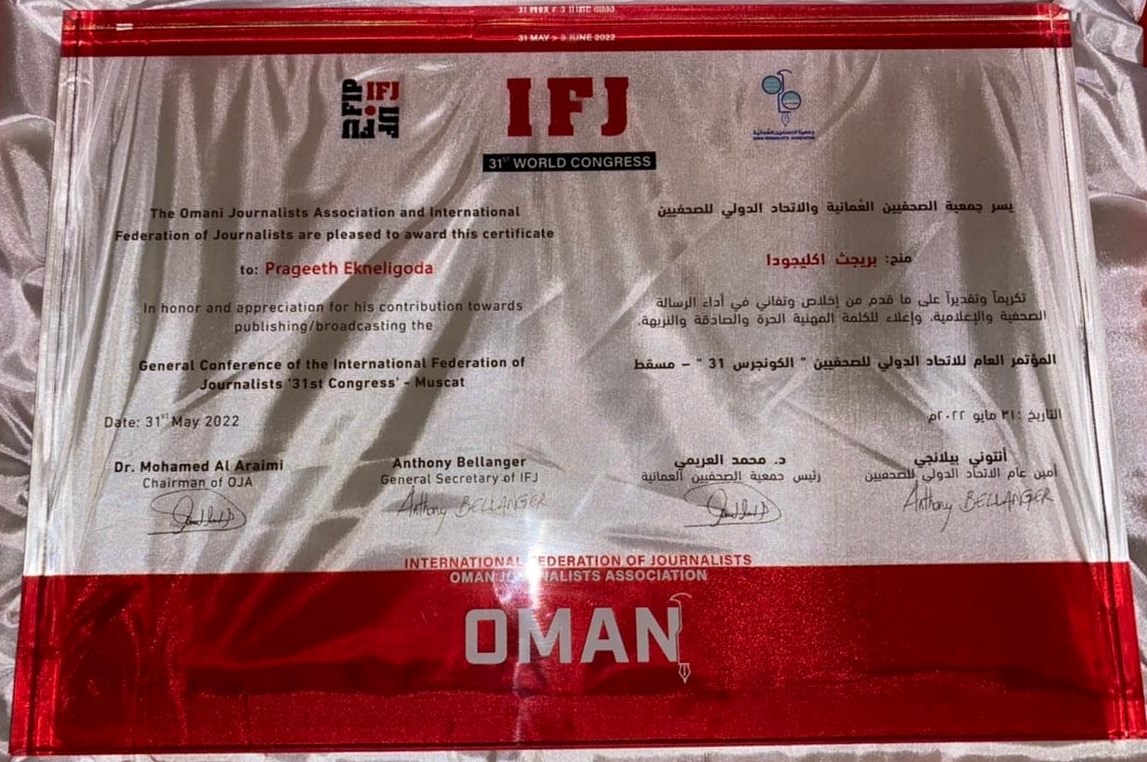 Journalist Prageeth Ekneligoda was an investigative reporter and he worked hard to expose the socio-cultural, economic, and political issues in Sri Lanka.

He did his career as a cartoonist and political columnist but also worked as an online journalist near the time of his disappearance.

Financial corruption and social injustice of the Rajapaksha regime, that governed Sri Lanka at that time, and the brutality of Sri Lanka’s war were criticised by him [Prageeth], and he said this was his responsibility.

First, 2009 brought him into a shambles as he was blindfolded and handcuffed but released after a day. On January 24, 2010, he disappeared after he was forcibly abducted, which from my perspective is a very cruel crime.

I, Sandhya Ekneligoda, the wife of journalist Prageeth Ekneligoda and a mother of two sons, I would like to introduce myself.

As a result, victimised by the disappearance of my husband in 2010, I transformed into a human rights activist, and creative struggler and I think I sacrificed my whole life for this struggle.

The reason to identify me as a creative struggler is my path. In Sri Lanka and the world, there are many cultural and religious beliefs, and rituals that are based on praying and lament, and imprecation and I am using those beliefs as my strategy.

I think it can fulfill my goal to achieve justice and truth for Prageeth one day and I feel he is with me lifelike.

I would like to share the experience that I had in the main three ruling institutions in Sri Lanka which are the executive, constitutional, and judicial. These experiences expose my view about impunity in Sri Lanka.

In the past 12 years, for 15 direct or indirect cases I went to magistrate courts, high courts, appeal courts, and the Supreme Court. Five of these cases are directly related to Prageeth.

Regarding the judicial bodies of Sri Lanka, on the January 25, 2010, I first went to the police station, which is in my local area. When I asked to complain, the officer in charge of that police station argued with me and wasted my time. He said my effort was for a fake complaint.

The role of the Human Rights Commission of Sri Lanka was similar to that.

At that time some ministers of the Rajapaksha regime said Prageeth was living in a foreign country as a refugee. In 2010, the former attorney general, Mohan Pieris, claimed the same at the Geneva conference. But after coming to Sri Lanka, he said to the court that “only god knows” the place which Prageeth lives.

In 2015 the Rajapaksha government was defeated in the election and the Yahapalana government came to the power. After this change, they called the crime investigation department to start investigations about killed journalists and several crimes.

Within a few months, they identified people who were responsible for the disappearance of Prageeth and produced them to the court after arrest.

The suspects are intelligence officers of Sri Lankan military forces. They abducted him in 2009 and again in 2010.

The crime investigation department and the Sri Lanka army are state institutions.

In a criminal case, the Sri Lankan republic are in the role of the complainant. But the Sri Lanka army did not provide data or information for this case. Sometimes they provided fake information to the court. The Rajapaksha gang that sits in opposition during this period pressured the government institutions which are investigating the case.

One is sticking contumelious posters against me, investigative officers, and lawyers of the attorney general department.

They used Buddhist monks to pressurize the court. One such kind of monk publicly berated me at court premises. He said, ‘Your man is a terrorist. You go and live as a beggar’.

And they published thousands of contumelious social media posts and stories. They defaced my images. I think I am the only woman in Sri Lanka who faced such kinds of hate speeches and actions.

There were impolite terms in those publications and some of them says “after killing my children and feeding me by their flesh.”

Former president Sirisena said these offenders must be released from remand because they are military officers.

In 2019, while in a situation like this, Colombo permanent trio bar high court and Homagama magistrate court started to examine the case.

In 2019, just after the arrival of President Gotabaya Rajapaksha, he appointed a commission to investigate political nemesis.

This commission purposely takes a decision to release military officers who are responsible for Prageeth’s disappearance and recommended convicting investigation officers. The commission takes evidence from witnesses forcibly without judicial power.

Similarly, they frighten the witnesses at the moment. A witness provided evidence in front of the magistrate in 2015, saying his previous declaration is wrong.

They use many tactics to protect and release military officers from punishment, who are committing crimes in need of political groups and keep impunity. By any means, the court gives punishments for the offenders, and they are trying to reach presidential pardons.

Please consider, how the victim or his family can face such a moment?

Now I am going to the starting point of my story. I said I am a woman who sacrificed her whole life for the fight. On January 25, 2022, to execrate Rajapaksha, I tonsured my long hair and wore black clothes. Now I am wearing this red shawl. You can google to find this real story. 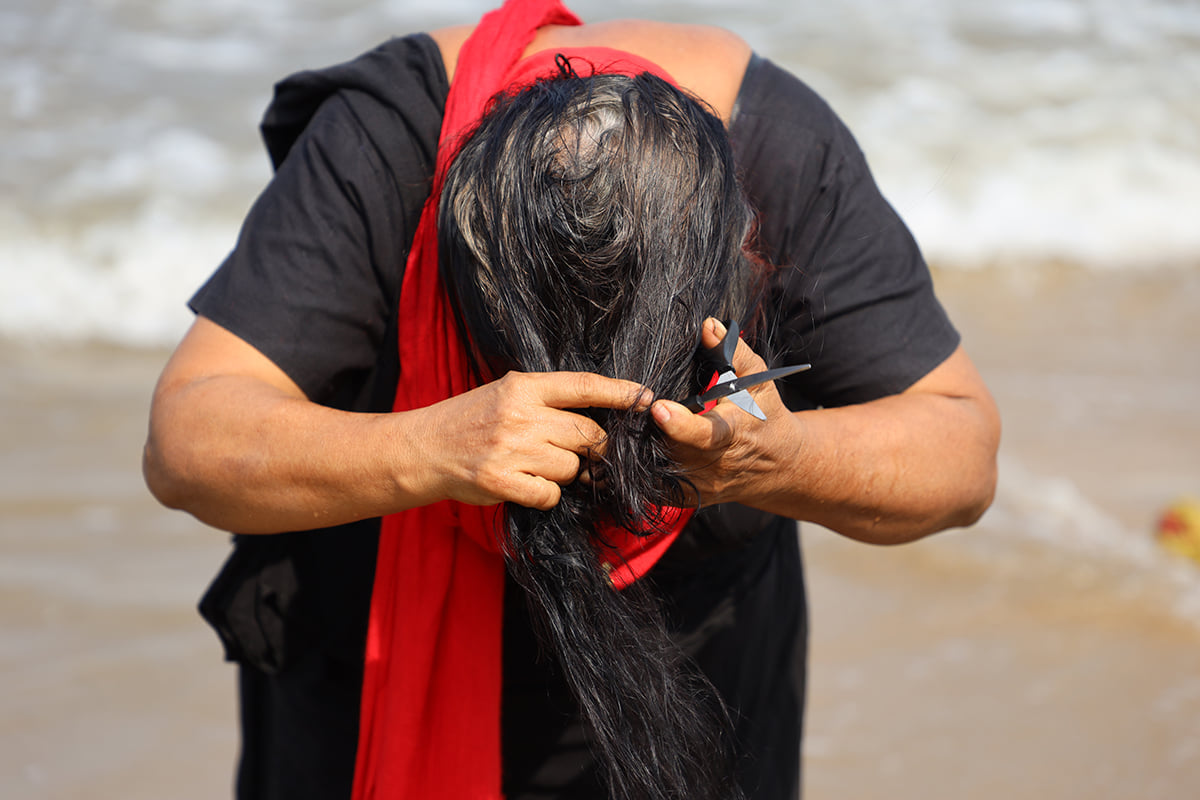 My appearance is saying to you, my arrival is from a country that does not have justice for victims and keeps impunity for offenders.

I have a promise to myself. That is, until there is justice for Prageeth, I am a tonsure and black-clothed women. I hope the day will come quickly and hope to get back my long hair and feel the happiness of colors.

Finally, I would like to say something to the family members of victimised journalists of the whole world, your beloved one is significant.

Powerful rulers are fearing the enlightenment of killed journalists by living journalists.

So, let us protect the light of his or her pen until having justice. Let us make it our responsibility. It will be the end of the impunity."

Sandhya Ekneligoda is an award-winning Sri Lankan human rights activist, who has campaigned for thousands of missing journalists since the abduction of her husband,Prageeth Ekneligoda, in 2010.