Veteran trade union leader and left wing activist in Sri Lanka Linus Jayathilake, has passed away after a brief illness.

The senior trade union leader, Linus Jayathilake has been the president of the United Federation of Labour and the Commercial and Industrial Workers' Union was 79 years old.

Linus Jayathilake, a doctor in theology, opted for left-wing politics instead of serving in the Catholic Church. For a long time he was the secretary in charge of the trade union wing of the Nava Sama Samaja Party, led by its General Secretary Prof. Vickramabahu Karunaratne.

He played a leading role in organizing a mass movement while in hiding, to lift the ban on the NSSP, the JVP and the Communist Party when the anti-Tamil pogrom was launched in July 1983 under the patronage of the JR Jayewardene government.

He also pioneered the Left Voice, a faction that broke away from the Nava Sama Samaja Party due to differences over its stance on the Tamil liberation struggle and its close political affiliation with the UNP.

The remains of the late Linus Jayathilake will be laid for final homage at the Bala Tampoe Hall of the Ceylon Mercantile Industrial and General Workers Union (CMU) on 12th May 2022 (Thursday) from 9 am to 4 pm.

Following a Farewell Funeral Ceremony at 3 p.m, his remains will be taken to the residence at 222, St. Mary's Road, Uswetakeiyawa by 4.00 p.m, says CMU.

Final rites will be held at 4.00 pm on 13th Friday at Uswetakeiyawa Public Cemetery. 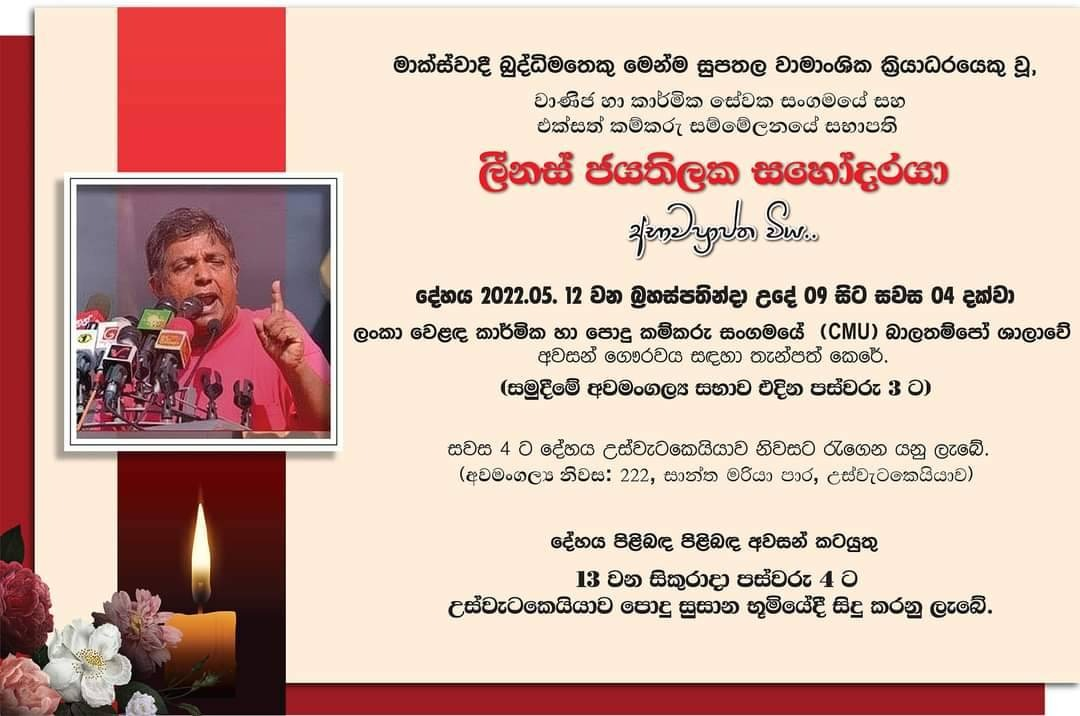