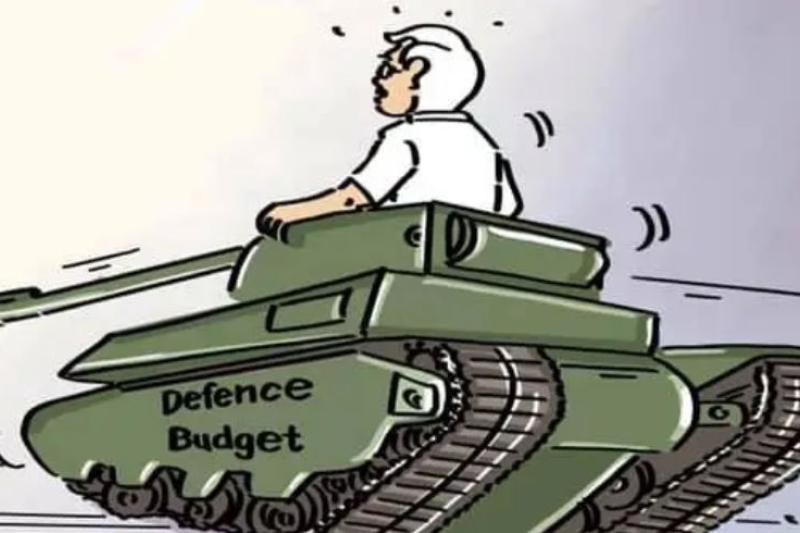 Despite the civil war in Sri Lanka ended in May 2009, historical data produced by reputable organisations prove that Sri Lanka’s defence spending has been in the increase.

Macro Trends report provides that, Sri Lanka’s Budget Expenditure on Defence since 1960 have been as follows:

It is also noteworthy to consider India’s former National Security Adviser and Foreign Secretary Shivshankar Menon’s statement as Sri Lanka’s internal war which ended in May 2009 had cost the country around US$ 200 billion. This US$ 200 billion is enormous and are unaccounted for in Sri Lanka’s records.

Moreover, the defence expenditure figures quoted above do not include for all defence aids ammunition, weapons and forces provided by the international communities at free of charge.

Sri Lanka’s Military Sizes have been as follows:

From the foregoing details, it is unequivocally evident that Sri Lanka has been spending significant of its budget in increasing the military in the island even after the end of the war in 2009. Sri Lanka has allocated 15% of its budget; approximately US$ 2 billion this year.

The military size increase by 94,000; from 223,000 to 317,000; after the war in 2009 signifies increased deployment of military personnel in Tamil homelands of North and East of the island. In the meantime, Sri Lanka Campaign for Peace & Justice provided the following statistics in its 6 March 2013 report. 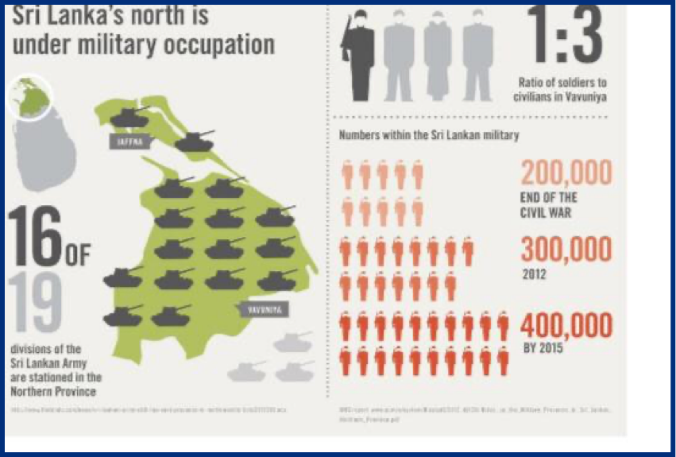 The above report signifies that the military deployment in North alone, has been 200,000 at the end of the war, 300,000 in 2012 and forecasted to be at 400,000 by 2015, representing that the government of Sri Lanka has been deploying almost all its military in North East of Sri Lanka, the traditional Homeland of Tamils by driving the indigenous Tamil people in to make-shift camps to live in destitute situation.

Tamil people, who had already suffered by the 30-year civil war until 2009, have continued to suffer by the land-grabbing by the military for its occupation.

Among the other practices of carrying out risk analyses, auditing on corruptions etc., we consider that the economic crisis of USD$ 50.7 billion foreign debts could have been mitigated to certain extent if Sri Lanka had not wasted its defence expenditure.

Inter alia, it is imperative to carry out a financial audit not only for defence procurements but also on fertiliser deals, 2014 Tsunami donations and any compensation paid for oil leaks, by questioning how Sri Lankan politicians came to own their wealth in the form of properties limited to Sri Lanka but also in foreign countries.

While the aforesaid factors are investigated, the way forward is to review the policies of the current and the future Sri Lankan government’s strategy for overcoming the following issues.

It is imperative that the international community carry out its unbiased investigation to the current plight of Sri Lanka.

In the interim, we would urge the International Monetary Fund (IMF) to take preliminary actions to stress Sri Lanka to demilitarise North and East of the island for relieving Tamil people from undue suppression caused by the occupying forces and to reduce unwarranted military deployment as a step forward to mitigate surging national expenditure.