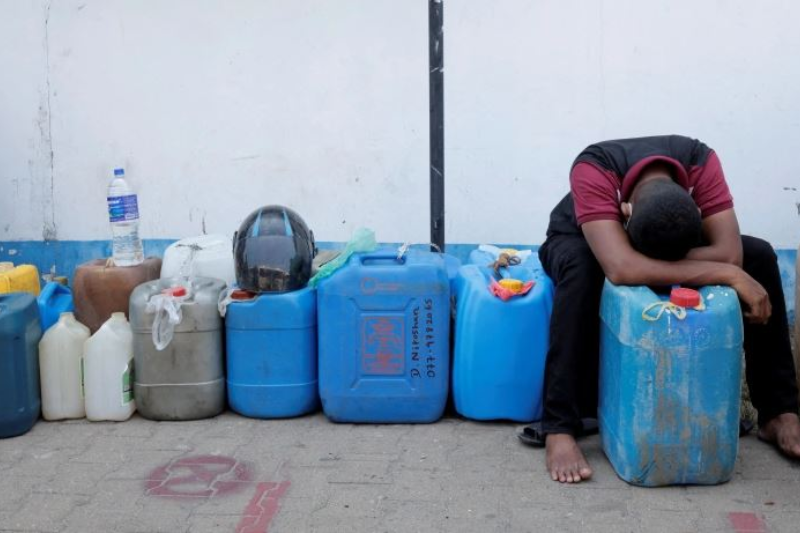 A man rests while waiting in a line to buy diesel near a fuel station in Colombo, Sri Lanka [Dinuka Liyanawatte/Reuters]

People across Sri Lanka are struggling to get hold of daily essentials as the country faces its worst economic crisis in decades.

Sri Lanka is mired in public debt after revenue from tourism evaporated in the wake of the coronavirus pandemic. With the country’s foreign currency reserves dwindling and foreign debt payments around the corner, it can barely pay for imports of staple foods, fuel and medicines.

The deepening debt emergency is touching nearly every facet of daily life in Sri Lanka. The Sri Lanka Podujana Peramuna-led coalition government’s decision to devalue the rupee while imposing strict limits on imports has pushed up prices of many key items.

Authorities have imposed power cuts. Bakeries have shut down due to a lack of cooking gas. Education authorities recently called off exams indefinitely for school students in one province after printing paper ran out.

A recent $1bn credit line from India to buy food and medicine – part of $2.4bn in assistance from Sri Lanka’s neighbour since January - has given President Gotabaya Rajapaksa’s government a little breathing space.

However, Sri Lanka is still well short of the money needed to service about $4bn in outstanding debt this year. It has only about $2.3bn in its foreign currency reserves, and is now looking to China and the International Monetary Fund for additional help.

A cabinet reshuffle by Rajapaksa has done little to placate critics, and he remains under pressure from protesters supported by the opposition United People’s Force. Tens of thousands of people joined one demonstration in the capital Colombo, with many demanding that the president resign.

In this episode of The Stream, we’ll look at the struggles people in Sri Lanka are facing, how the economic crisis risks undermining the country's stability, and what happens next.