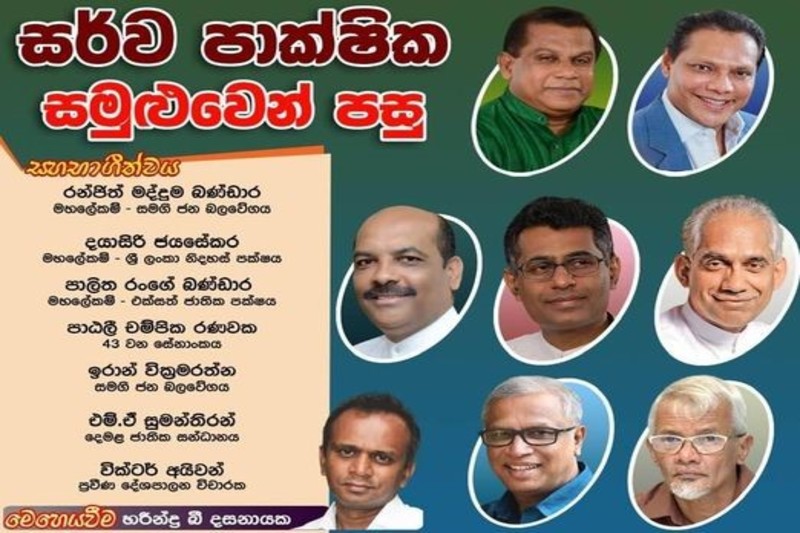 Leading political parties have reiterated the need to have a national consensus to get the country out of the current economic crisis. General Secretaries of the Samagi Jana Balawegaya, Sri Lanka Freedom Party, United National Party and the spokesperson of the Tamil National Alliance called on all political forces to work together to fulfil the aspirations of the people. Senior journalist Victor Ivan also participated in the discussion.

All parties agreed that the 20th Amendment to the Constitution was the root cause of all the issues. Therefore, it was proposed to repeal the 20th Amendment and to assign full powers to the Parliament in order to resolve many of the current issues the country is faced with.

The proposal made by leading senior journalist Victor Ivan to seek advice from global institutions such as the United Nations was also approved by the participants.

They made these observations in a webinar organised by the National Movement for Social Justice on Sunday (27).

Speaking at the webinar, SLFP General Secretary Dayasiri Jayasekera said that the government has clearly failed and as a result, the country has also suffered dire consequences. He said that all political forces in the country should arrive at a national consensus which is why they requested to convene an All-Party Conference.

"We presented 22 proposals to the President to get the country out of this crisis. Also, the leaders of 11 political parties affiliated to the government came together to discuss this. The whole country knows what happened after that. Two ministers were removed from their ministerial posts. However, the President decided to convene an All-Party Conference because he thought it would be possible to resolve the issue with the assistance of the SLFP in such a situation. However, we do not think so.The Governor of the Central Bank made a political statement at that conference which was ill advised. That is why an argument arose with Ranil Wickremesinghe. That should not be the case. Therefore, the time has come for us to work together. We have no issues with political parties pursuing their own agendas but if we are to come out of this crisis unscathed, we must have a national consensus."

TNA spokesperson parliamentarian M.A. Sumanthiran said that Sri Lanka must seek assistance from experts if we are to find solutions to end the crisis. Considering the depth of the crisis, the TNA is prepared to extend its full support to all endeavours that aim to resolve the crisis.

"That is why we attended the All-Party Conference. We stressed that the parliament should have full control over public finance. We can have a national consensus only if that happens," he said.

SJB General Secretary Ranjith Manduma Bandara said the country is undergoing the worst crisis in recent history. Commenting on why the SJB abstained from participating at the All-Party Conference, he said that the lack of consensus within the government compelled the party to boycott the conference.

"If the government is on the same page, then we can share our views. We do not stand by the government. We stand by the people and the country. We will work with all forces to arrive at a common programme. The parliament should take the lead in this. However, the government led by the President seems to bypass the Parliament. They do not inform the House of international agreements they enter into. They act in an arbitrary manner while trying to suppress opposition activists. In this backdrop, how do you expect us to work the government?

At the same time, we will never hesitate to work with all political forces not associated with the government today. As such, we are prepared to come into a common agreement with all parties to resolve the crisis," Madduma Bandara said.

General Secretary of the United National Party Palitha Ranga Bandara stated that the need of the hour was to unite all potent forces to reach a common consensus to save the country from the present crisis.

"The government is conducting affairs in an arbitrary manner. The people of the country are suffering the most as a result. That is why we participated in the All-Party Conference and tried to show what needs to be done for the country. But even there, they acted in a very arbitrary manner. This was evident from the responses from the government. Our position is that all should unite to save the country from this crisis. We have always called for a common consensus. The first move should be to allow the Parliament to have full control over public finance," Palitha Range Bandara said.

Commenting on the crisis, the Leader of the 43 Brigade parliamentarian Patali Champika Ranawaka stressed that although it is not difficult to overthrow this government today, a mere change of government alone will not provide solutions to the crisis. He also said that all potent forces in the country should move towards a common programme with a clear vision.

“We have to act responsibly within a democratic framework to end the Rajapaksa family rule. We must move towards a common programme that unites all political leaders except the Rajapaksa family. If we fail to do so, this country will inevitably face catastrophic consequences," he said.

The Chairman of the National Movement for Social Justice Karu Jayasuriya stressed that Sri Lanka could overcome this crisis. Pointing out that India too had faced a similar crisis, he noted that India was able to resolve it through collective and inclusive leadership.

"We too must tread on a similar path. The Parliament should bear the main responsibility in this regard. We are in such a situation because the government bypassed the Parliament in the decision making process. Therefore, the aim of all political forces in this country should be to stop the concentration of power on a single individual and return back to parliamentary traditions. We need a common consensus on a clear programme to resolve the crisis," the former Speaker said.

Senior journalist Victor Ivan said the current crisis the country is facing today is not limited to the economy alone. While stressing that the crisis was a "serious blow to the economy", he said that it was only a part of the larger socio-political crisis in the country. He also warned of serious consequences if we fail to find answers through a clear programme.

"The government has failed to state their stance on the current crisis or how they see it. Furthermore, opposition parties have also not presented their plan individually or collectively. However, only the government can provide solutions to this crisis. If the opposition parties want to execute that task, they will have to get into power. However, constitutional restraints have limited the possibility of such a move from taking place. This crisis was created by the political system in our country. Therefore, there is no simple answer to this crisis without a comprehensive political reform process. For that, it is vital to reach an agreement between all political parties in the country. If not, the country could fall into anarchy. If the country finds itself in such a situation, it will plunge into a constitutional crisis that couldn't be resolved within the existing political structure. It should not be forgotten that anarchy can have far more devastating consequences than a dictatorship in a country," he said.