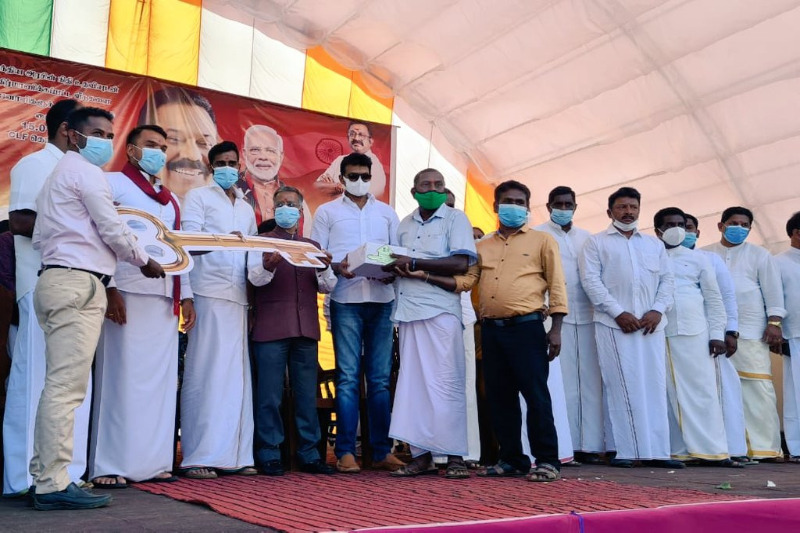 India has handed over 1,000 houses built under the third phase of its housing project to beneficiaries in Sri Lanka’s plantation areas on the occasion of Pongal, Indian High Commission here said on Sunday (16).

As many as 4,000 houses are being constructed with grant assistance from India in plantation areas, spread across seven districts of Sri Lanka, under the third phase for the estate workers in Sri Lanka, it said in a statement.

High Commissioner Gopal Baglay, Minister of Youth and Sports, Minister of Development Coordination and Monitoring and State Minister of Digital Technology and Enterprise Development Namal Rajapaksa and Minister of State for Estate Housing and Community Infrastructure Jeevan Thondaman jointly handed over the house keys on Saturday, it said.

Members of Parliament S B Dissanayake and M Rameshwaran and other dignitaries were also present at the event in Kotagala where keys were handed over to more than 1,000 beneficiaries from plantation areas, according to the statement.

Speaking on the occasion, High Commissioner Baglay conveyed Pongal greetings in Tamil and stressed that India will stand with Sri Lanka and continue to work for the development of Indian-origin Tamil community, it said.

He noted that the community was an organic link between India and Sri Lanka and underlined that the festival of Pongal represented shared civilisational ties between the two countries, the statement said.

The houses were handed over on a day Sri Lankan Finance Minister Basil Rajapaksa and External Affairs Minister S Jaishankar held discussions on projects by India that would strengthen the economy of the island nation.

Jaishankar conveyed greetings to the Sri Lankan Finance Minister and the government and the people of Sri Lanka for the year 2022 and on the occasion of Pongal celebrated both in India and Sri Lanka, according to the High Commission statement.

He said that India has always stood with Sri Lanka, and will continue to support it in all possible ways for overcoming the economic and other challenges posed by COVID-19 pandemic, it said.

As close friends and maritime neighbours, both India and Sri Lanka stand to gain from closer economic interlinkages, Jaishankar said.

According to the High Commission statement, the Indian Housing Project is a flagship development assistance programme in Sri Lanka which is being carried out in different phases.

Around 3,000 houses have already been handed over to beneficiaries till date and handing over of close to 750 houses is being scheduled under this phase. Remaining houses are at various stages of implementation, it said, adding that as many as 46,000 houses were built/repaired in the country’s Northern and Eastern provinces in the first two phases.

Another 10,000 houses will be constructed in the plantation areas in the next phase. This would take India’s overall commitment under the project to 60,000 houses, it said.

The dignitaries took part in a traditional ‘Maatu Pongal’ ceremony prior to the handing over event, which was attended by thousands and featured cultural performances, the statement said.

Celebration of Pongal in Sri Lanka attests to the abiding cultural linkages between the people of India and Sri Lanka as well as the shared heritage.

Development assistance is a key pillar of bilateral relationship between the two countries.

At a total quantum of around USD 3.5 billion, development assistance from India cuts across sectors spanning from infrastructure development to all aspects of daily human lives such as education, health, livelihood, among others.

Estate workers from plantation areas have been at the centre of the such assistance and several projects implemented through grant assistance by India, including the 150-bed hospital in Dickoya, multi-purpose hall in Saraswathy Central College in Pussellawa reinforce India’s ongoing focus on the region under the ‘Neighbourhood First’ policy, the statement added.