The latest incident to add fuel to the fire was the directive issued by Finance Minister Basil Rajapaksa to immediately remove current chairman Theshara Jayasinghe from the position and appoint SLPP Administrative Secretary Renuka Perera as the new chairman.

According to Finance Ministry sources, Secretary to the Ministry of Finance S.R. Attygalle had informed the Secretary of the Sri Lanka Insurance Corporation (Litro Gas is a fully-owned subsidiary of SLIC) yesterday (12) to appoint Renuka Perera to the board of directors and as its new chairman.

Commenting on the matter, a spokesperson at the SLPP headquarters in Nelum Mawatha said that President Gotabaya Rajapaksa was aware of the impending changes, adding that Theshara Jayasinghe will be given a new appointment.

The spokesperson noted that the changes are being made to the state-owned gas company’s top post amidst the gas LP gas shortage in the market and the controversy regarding the composition.

Meanwhile, President Gotabaya Rajapaksa has made an inspection visit to the Litro Gas storage terminal in Kerawalapitiya earlier today (13) where he held a cordial discussion with Litro Gas chairman Theshara Jayasinghe.

Theshara Jayasinghe is the convener of 'Ekamuthuwa', a collective that played a key role in Gotabaya Rajapaksa's presidential bid. Accordingly, Theshara was given a plum posting soon after Gotabaya became president as the former was appointed as the chairman of National Youth Services Council.

Theshara Jayasinghe was appointed as chairman of Litro Gas on July 08, 2021 after former chairman Anil Koswatta was given marching orders under the directions of Finance Minister Basil Rajapaksa. 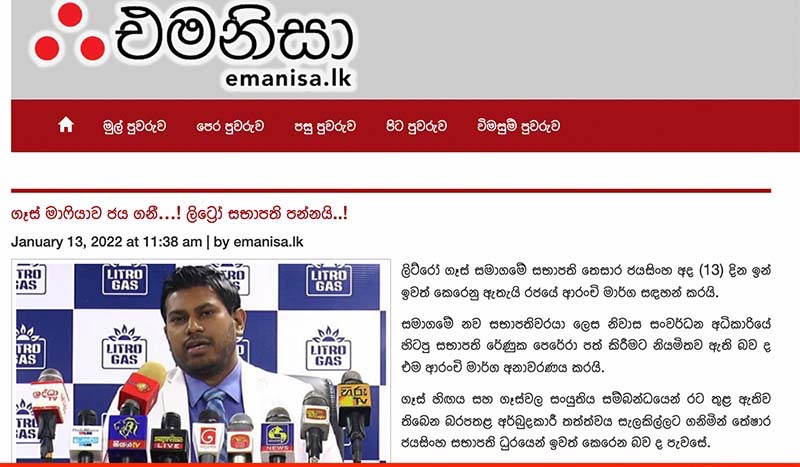 Pro-government social media platforms had reported the incident as a victory of the faction representing the 'gas mafia'.

Theshara Jayasinghe had earlier revealed details regarding a mafia in the gas industry and that certain elements were deriving massive profits by fully controlling the market.

Jayasinghe, speaking to the media, said his company could not issue gas to the public as those who supplied gas used strong arm tactics to secure an extension for their contract for two years.