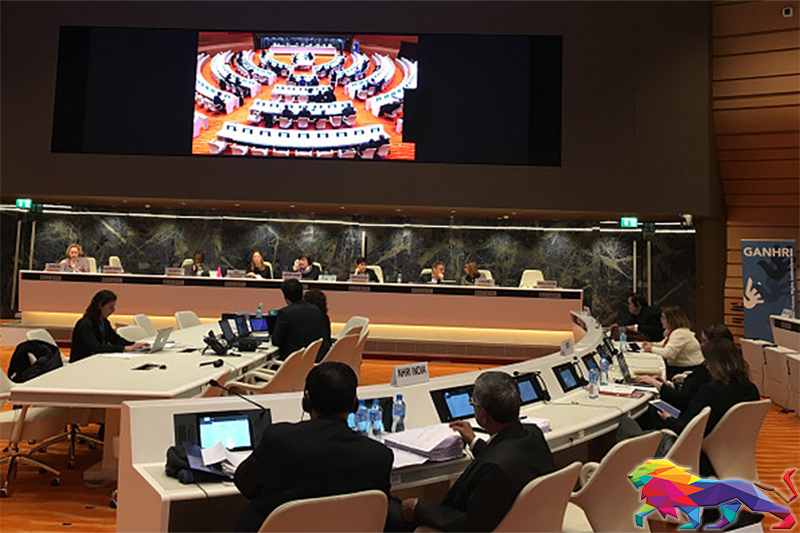 The UN General Assembly adopted the guiding principles for NHRCs, known as “Paris Principals” in 1993.

The Sub-Committee on Accreditation of the GANHRI was held in June 2021 but the report has been made public recently.

This is the second time HRCSL has been downgraded by the GANHRI. First it was in 2007 only under the previous government it was upgraded to A status.

“In view of the information before it, the SCA is concerned that the institution’s independence and effectiveness has not been sufficiently maintained in line with the requirements of the Paris Principles.”

“The SCA is of the view that the HRCSL has not effectively engaged on and publicly addressed all human rights issues including allegations of deaths in custody and torture, nor has it spoken out in a manner that promotes and protects all human rights.”

“The SCA also notes that the HRCSL did not submit a parallel report to the United Nations Human Rights Committee.”

The Sri Lanka section of the Report of the Sub-Committee on Accreditation:

Recommendation: The SCA recommends that the HRCSL be downgraded to B status.

In accordance with Article 18.1 of the GANHRI Statute, a recommendation to downgrade does not take effect for a period of one (1) year. The SCA notes that the HRCSL maintains A status until the SCA’s second session of 2022. This allows an opportunity for the HRCSL to provide the documentary evidence necessary to establish its continued conformity with the Paris Principles.

In February 2021, the SCA received correspondence from civil society organizations regarding the appointment process of the HRCSL, and related concerns with respect to the lack of pluralism in the HRCSL’s membership and staff, as well as its effectiveness in discharging its human rights mandate.

During the session, the SCA conducted a telephone interview with the HRCSL in which the HRCSL was asked to provide responses in relation to the following issues:

– The selection and appointment process that took place for the current Chairperson and Commissioners of HRCSL;
– How pluralism is ensured in the current membership of the Commissioners and staff;
– How the 20th amendment of the Constitution of Sri Lanka (the 20th Amendment) has affected the HRCSL’s ability to realise and perform its mandate;
– Steps taken by HRCSL to respond to recommendations made by international human rights mechanisms; and
– Actions taken, including public statements/positions, on reports of serious human rights violations including surveillance, intimidation, and judicial harassment of human rights defenders, excessive use of force and arrest and detention of protesters, deaths in police custody and torture by law enforcement officials, and the Prevention of Terrorism Act and the law’s repercussion on civil and political rights.

While the SCA acknowledges that the HRCSL has provided some information in relation to the above mentioned issues, in both its interview and written submission, it considers the responses insufficient to address the substance of its concerns.

In view of the information before it, the SCA is concerned that the institution’s independence and effectiveness has not been sufficiently maintained in line with the requirements of the Paris Principles.

The HRCSL is encouraged to continue to actively engage with the OHCHR, GANHRI, APF, and other NHRIs, as well as relevant stakeholders at international, regional and national levels, in order to continue strengthening its institutional framework and working methods.

The SCA notes with concern: 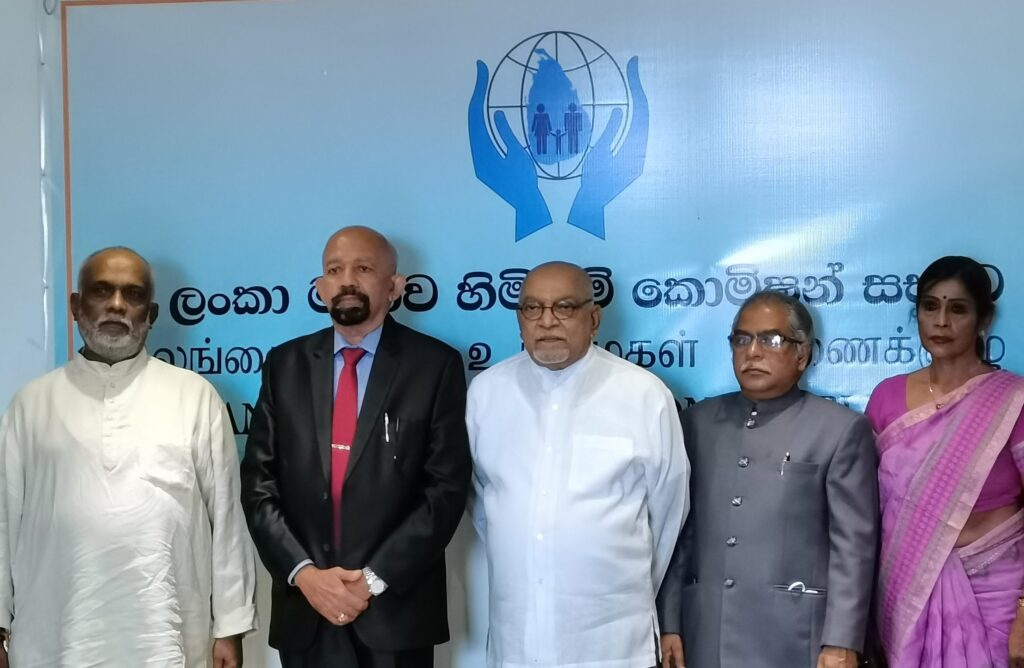 The SCA notes the information received regarding the adoption of the 20th Amendment in 2020, which significantly changed the selection and appointment process for members of HRCSL in such a manner that could compromise its independence.

The 20th Amendment abolished the Constitutional Council, a 10-member body with three seats reserved for civil society representatives tasked to recommend candidates for appointment as HRCSL Commissioners. In its place, the 20th Amendment reinstated the Parliamentary Council, composed exclusively of members of parliament, with the power to make observations only to the President of the Republic with respect to the appointment of HRCSL Commissioners.

The SCA also notes the information received in third-party submissions that in the recent selection and appointment process in December 2020, the Government did not advertise the vacancies, nor did it detail the criteria for the assessment of the candidates. This resulted in appointments made in a manner that was not wholly transparent to civil society.

The HRCSL was asked to respond to these concerns. The HRCSL reported that as the Parliamentary Council is composed of parliamentarians who represent the public and different groups in society, direct involvement of civil society in the process was not required. The HRCSL also confirmed that the publication of vacancies is not a legal requirement.

In view of the available information before it, the SCA is of the view that the process currently enshrined in law is not sufficiently participatory and transparent. In particular, it does not:

The SCA is also of the view that the selection and appointment process undertaken in 2020 was not characterized by openness and transparency and did not provide sufficient opportunities for consultation with or participation of civil society.

It is critically important to ensure the formalization of a clear, transparent, and participatory selection and appointment process of the NHRI’s decision-making body in relevant legislation, regulations or binding administrative guidelines, as appropriate. A process that promotes merit-based selection and ensures pluralism is necessary to ensure the independence of, and public confidence in, the senior leadership of an NHRI.

The SCA encourages the HRCSL to advocate for amendments in the Constitution and in its enabling law to provide for a process that includes requirements to:

a) Publicize vacancies broadly;
b) Maximize the number of potential candidates from a wide range of societal groups;
c) Promote broad consultation and/or participation in the application, screening, selection and appointment process; and
d) Assess applicants on the basis of pre-determined, objective and publicly available criteria.

The SCA refers to Paris Principle B.1 and to its General Observation 1.8 on ‘Selection and appointment of the decision-making body of NHRIs’.

As noted above, the SCA provided an opportunity for the HRCSL to respond to specific issues of concern raised in third-party submissions on the independent and effective exercise of its human rights mandate. It acknowledges that the HRCSL did provide some information including as follows:

Based on the HRCSL written and oral response to the issues above, the SCA is of the view that the HRCSL has not effectively engaged on and publicly addressed all human rights issues including allegations of deaths in custody and torture, nor has it spoken out in a manner that promotes and protects all human rights.

An NHRI’s mandate should be interpreted in a broad, liberal, and purposive manner to promote a progressive definition of human rights which includes all rights set out in international, regional and domestic instruments. NHRIs are expected to promote and ensure respect for all human rights, democratic principles and the strengthening of the rule of law in all circumstances, and without exception. Where serious violations of human rights are imminent, NHRIs are expected to conduct themselves with a heightened level of vigilance and independence.

Further, the SCA highlights that regular and constructive engagement with human rights defenders and civil society organizations is essential for NHRIs to fulfil their mandates effectively.

The SCA also notes that the HRCSL did not submit a parallel report to the United Nations Human Rights Committee.

The Paris Principles recognise that monitoring and engaging with the international human rights system, in particular the Human Rights Council and its mechanisms (Special Procedures and Universal Periodic Review) and the United Nations human rights treaty bodies, can be an effective tool for NHRIs in the promotion and protection of human rights domestically.

Depending on existing domestic priorities and resources, effective engagement with the international human rights system may include:

The SCA encourages the HRCSL to strengthen its efforts to address all human rights issues, including those noted above. The SCA further encourages the HRCSL to ensure that its positions on these issues are made publicly available, as this will contribute to strengthening the credibility and accessibility of the institution for all people in Sri Lanka.

The SCA refers to Paris Principles A.1, A.2, A.3, C(f), and (g) and to its General Observation 1.5 on ‘Cooperation with other human rights bodies’.

The SCA notes the information received regarding the lack of sufficient plurality within the members of HRCSL. According to the institution, the current members are composed of four (4) Sinhalese and one (1) Tamil, with no Muslim representative, and only one (1) woman.

The SCA acknowledges the response by HRCSL that due to the five-member limit in its membership, it is difficult to cover the pluralistic character of Sri Lankan society and that pluralism is reflected in their staff composition and in their engagement with vulnerable groups.

A diverse decision-making and staff body facilitates the NHRI’s appreciation of, and capacity to engage on, all human rights issues affecting the society in which it operates, and promotes the accessibility of the NHRI for all citizens. Pluralism refers to broader representation of national society.

Consideration must be given to ensuring pluralism in the context of gender, ethnicity, or minority status. This includes, for example, ensuring the equitable participation of women in the NHRI.

The SCA is of the view that it is good practice for the enabling law of an NHRI to include a requirement to ensure pluralism and diversity. This facilitates its appreciation of, and capacity to engage on, all human rights issues affecting the society in which it operates. In addition, it promotes the accessibility of the NHRI for all people in the society within which it operates.

The SCA encourages the HRCSL to take steps to ensure pluralism and diversity including appropriate religious, ethnic and gender balance in its composition.

The SCA refers to Paris Principle B.1 and to its General Observation 1.7 on ‘Ensuring pluralism of the NHRI’.