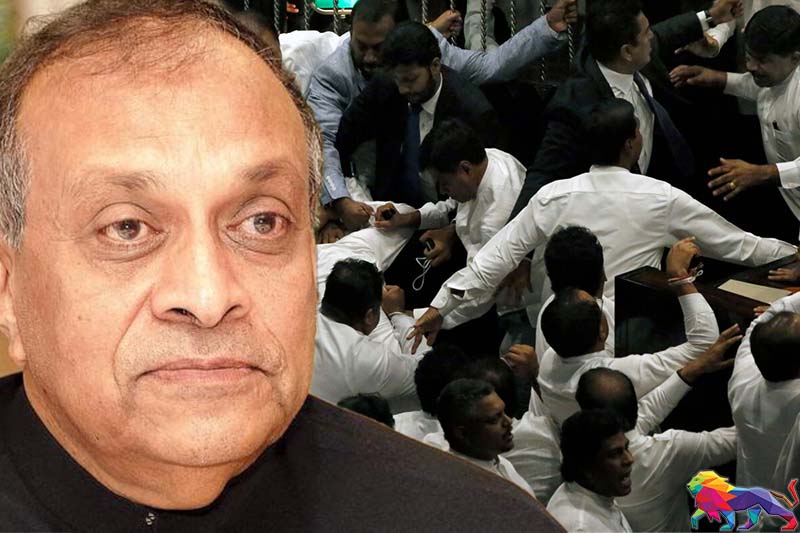 Former speaker Karu Jayasuriya said that he is deeply saddened to have witnessed certain incidents that transpired in parliament recently.

When thousands of lives have been lost due to the Covid pandemic and especially at a time when the lives of the people are in turmoil due to the lack of foreign exchange, he said that it is necessary to be united and resolve these issues through the parliament.

At the same time, if there is no national, religious and political unity in the country, the country will not be able to prevent further deterioration, Jayasuriya said, noting that it is a betrayal of future generations.

Jayasuriya, who laso heads the National Movement for Social Justice (NMSJ) made these remarks at a press briefing in Colombo yesterday (07).

Commenting further on a code of conduct for parliamentarians, the former speaker said; "The unfortunate incident of violence on October 28, 2018 was immediately reported around the world. The whole democratic world condemned this incident and it was a great disgrace to Sri Lanka that the Government was not recognised by any democratic country for nearly 52 days."

These past incidents, though painful, are mentioned today with the intention of preserving the dignity of Parliament.

Accordingly, the most salient points mentioned in it are as follows :

3) Every Member of Parliament should consider public relations

4) Government appointments should be based on merit in recommending individuals for contracts, grants, or other benefits.

A. Acting in accordance with conscience.

B. Respect for human rights and the inherent dignity of the people.

C. To act in a manner befitting the trust and respect of the people.

D. Enforcement of the concepts of a democratic government such as the binding of the Constitution and the theory of separation of powers and the rule of law.

E. To exercise the privileges which Parliamentarians are entitled to under any law and to carry out their duties in the public office with due diligence and dignity.

Each Member of Parliament is personally responsible for contributing to the effective and efficient functioning of Parliament.

Every Member of Parliament must respect the role, independence, rights and responsibilities of the staff of Parliament.

Every Member of Parliament is responsible for ensuring that the Executive is accountable to Parliament in safeguarding parliamentary democracy.

No Member of Parliament shall take any action which may be detrimental to the reputation and integrity of Parliament or its Members or the country.

In addition, there are rules regarding the use of public property, attendance, behaviour, politeness and the dress code that must be worn when coming to Parliament.

I would like to draw the attention of all Hon. Members to the following rules due to the current crisis.

1) Members of Parliament should be polite and use appropriate language in political speeches and especially in parliamentary debates.

2) No Member of Parliament shall assault, harass or threaten anyone.

There have been reports of insults aimed at women in Parliament recently. It is a very unfortunate situation. Furthermore, the civilised society does not approve of false accusations, use obscene language, or resort to character assassinations.

It is reported that the opposition has refused to attend Parliament until their security could be assured. This is a deadly blow to democracy. It is our sincere hope that an impartial inquiry into this incident will be conducted soon.

At the same time, if there is no national religious and political unity in the country, the country will not be able to prevent further deterioration. It is a betrayal of our unborn and future generations."