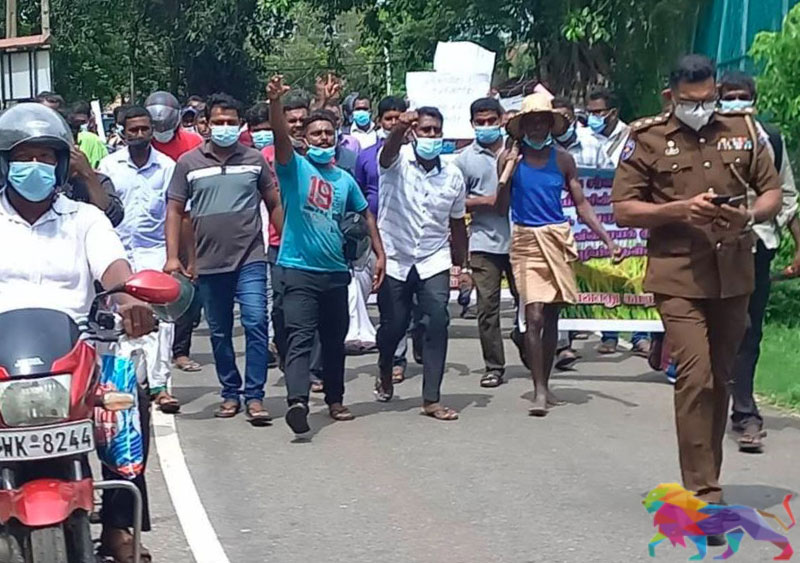 With the paddy cultivation in the Maha season already underway and the government struggling to address the severe shortage in fertilisers and agrochemicals under President Gotabaya Rajapaksa's organic farming only policy, farmers across the island are now releasing their frustrations through protest campaigns.

Farmers who drove tractors into Batticaloa staged a protest opposite the Batticaloa District Secretariat on Monday (08), urging the authorities to provide necessary chemical fertilisers for their crops.

They also warned that they will have to resort to more drastic measures if the authorities fail to resolve the fertiliser issue.

Provincial journalists reported that the farmers had also handed over a letter detailing their demands to the District Secretary.

President Gotabaya Rajapaksa’s ill-conceived organic farming policy which banned the import of all chemical fertilisers and pesticides is threatening to plunge the country’s agriculture into a deep production slump.

Most farmers claim that they have already sold everything in possession and the rest have been mortgaged to banks and warned that they may be pushed to beg on the streets if the government fails to resolve this issue soon.

However, addressing a function held at the Mandaduwa Public Stadium recently, the President remarked that he will not use military style tactics to get the farmers to go along with the transition into organic farming.

"Some people expected a military-style Gotabaya. I could do that, but that means when the farmers are told to use organic fertilisers, I could grab them by the neck and say ‘use this’ like in the military. I have no need to do that," he said.

Sri Lanka is currently embroiled in a heated diplomatic row with China after a batch of contaminated fertiliser that was sent by a Chinese company was rejected by the National Plant Quarantine Service (NPQS) of Sri Lanka.

The Chinese company meanwhile has demanded USD 8 million from the NPQS in damages.