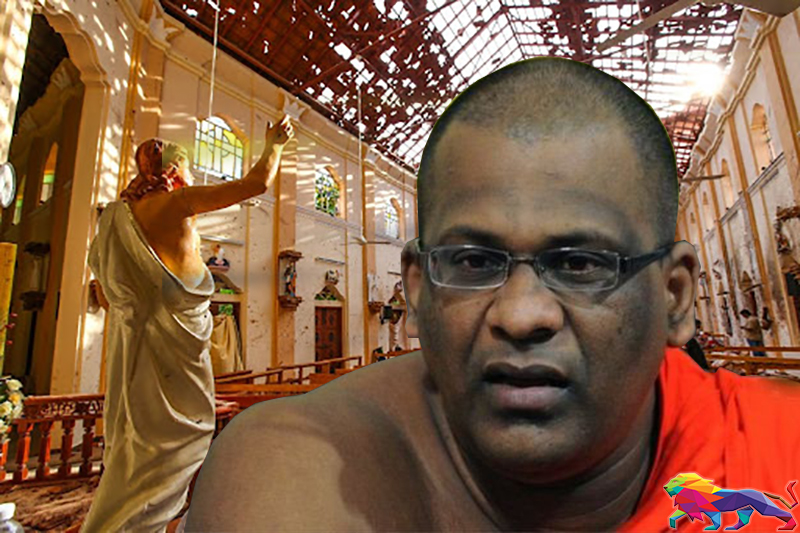 The Catholic Church has denied claims it had received information of a possible attack on Easter Sunday from a Sinhala Nationalist Buddhist Bhikku who had information of the impending terror attack.

Bodu Bala Sena chief Galaboda Aththe Gnanasara Thera said that he had informed the Archbishop of Colombo, Malcolm Cardinal Ranjith in 2017 that there would be an attack on the Catholic community on Easter Sunday 2019.

He made these claims recently while attending the ‘Salakuna’ political programme on Hiru TV owned by Rayynor Silva, a close confidant of President Gotabaya Rajapaksa.

However, refuting Gnanasara Thera’s claim, the Catholic Church calling a press conference in Colombo said until the attack took place, neither the security forces, the intelligence services, the Police or even Gnanasara Thera did not warn Malcolm Cardinal Ranjith or the Catholic community of a possible attack.

Instead, the Catholic Priests attending the press conference said that at a meeting between Gnanasara Thera and the Cardinal in 2017, only issues merely regarding Muslim expansionism had been raised.

The Catholic Church’s recent criticism of the government over its investigation into the Easter attacks appears to have prompted Gnanasara Thera to raise his voice to defend the current government.

His statement revealed that the BBS knew of the impending attack leading the Catholic Church to question if this information was shared at the time with the intelligence services.

During the programme, Gnanasara Thera further revealed that information and evidence regarding the attack, the identity of the group involved in the attack and their whereabouts have been forwarded to the President.

“Though Gnanasara claims he informed the President, did he properly inform relevant responsible authorities and persons like the security forces, intelligence services and police? Did these authorities carry out a proper investigation? Did the authorities do the needful to prevent the attack? What steps have they taken against the groups connected to the attack?,” the Catholic Priests questioned during the Press Conference.

Based on Gnanasara Thera's revelations, they requested the IGP to pay due attention to it, conduct an impartial and comprehensive investigation and take all necessary steps to prevent such attacks based on the information revealed by the investigations and arrest those involved in the previous attack as soon as possible.