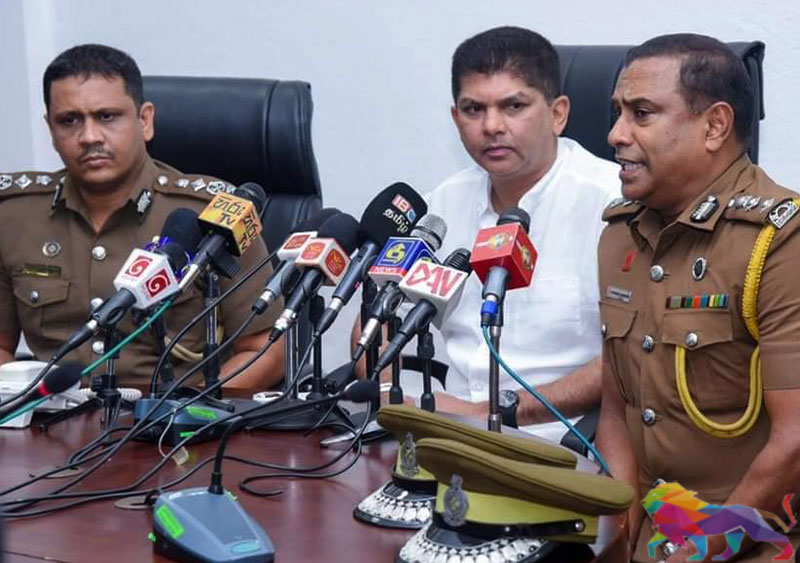 Tamil MPs, Lawyers, Prisoner Rights Groups and Civil Society Activists are pressurizing the government to dismiss State Minister Lohan Ratwatte from all positions in the
government, arrest him and take legal action against him for his recent criminal behaviour.
Ratawatte who was recently accused of entering the Welikada prison and Anuradhapura Prisons forcefully in an inebriated state, is also accused of harassing several tamil prisoners and making death threats to them while brandishing a pistol. However, despite stepping down from the post of State Minister of Prisons following this incident, he continues to hold other positions in the government without consequence.
Ratawatte only offered to step down after he was named by Tamil MPs, including Gajendra Kumar Ponnambalam as the Minister who had forcefully entered the Prisons over the weekend.
However all concerned parties have called on the government to confiscate the firearm in possession of Ratwatte as it poses risk to the people. They have also called for an investigation into the incident and the arrest of Ratawatte and others involved.
But despite the backlash the government has maintained it will not bow down to pressure adding that Ratwatte’s resignation from the portfolio is temporary.
Sports and Youth Affairs Minister Namal Rajapaksa meeting media personnel at the Anuradhapura Prison yesterday said the resignation will be in effect till an investigation is completed into the allegations made by the media and opposition MPs. “The President and the Prime Minister have called for a fair investigation into these allegations” he said, adding that Ratwatte resigned in order to support these investigations.
However, according to the website of the Sri Lankan Parliament, Lohan Ratwatte still serves as the State Minister of Gem and Jewellery Industries and the Minister of Prison Management and Prison Rehabilitation.
According to Human rights groups Ratwatte has committed a crime for which he can be arrested without a warrant.
Meanwhile the Committee for Protecting Rights of Prisoners (CPRP), a prisoner rights group in Sri Lanka has submitted a complaint to the Criminal Investigations Department (CID) of the Police calling for the arrest of two top officials of the Department of Prisons for attempting to cover up the criminal acts of the State Minister.
The Committee to Protect the Rights of Prisoners has filed a complaint on Thursday (September 16) requesting the arrest of former Prisons Minister Lohan Ratwatte, Prisons Commissioner Thushara Upuldeniya and Prisons Media Spokesperson Chandana Ekanayake.
The complaint, signed by Senaka Perera, Attorney-at-Law, Chairman of the Committee to Protect the Rights of Prisoners, and Sudesh Nandimal Silva, Secretary, points out that it is an offence under the Offensive Weapons Act of Sri Lanka to make a death threats using a pistol.
"Accordingly, the offence of attempted murder under the Penal Code has also been incorporated here." the complaint noted.
It has also been stated in the complaint it is in contempt of court to exert undue pressure on detainees who are under judicial custody.
Inhumane and degrading treatment
The Committee to Protect Prisoners' Rights further points out that it is a violation of the Convention on Political Rights to pick out Tamil prisoners and subject them to inhumane and degrading treatment from among inmates of various ethnic groups such as Sinhalese, Tamils and Muslims.
"It is also an offence under the Prisons Ordinance to act in a manner that interferes with the duties of prison officers outside the provisions of Sections 38 and 39 of the Prisons Ordinance." the complaint further noted.
Accordingly, the Committee to Protect the Rights of Prisoners has informed the CID that Lohan Ratwatte can be arrested without a warrant under Sri Lankan law based on the criminal acts allegedly committed by him.
Aiding and Abetting
The Committee to Protect Prisoners' Rights further states that the Commissioner General of Prisons Thushara Upuldeniya has provided all necessary assistance to Lohan Ratwatte to commit the above crimes.
"He has set the stage for the above crimes to be committed without giving proper instructions to the officers of the Anuradhapura Prison operating under him."
According to the Prisoners' Rights Protection Committee, Thushara Upuldeniya has neglected his duties as a government official.
"Accordingly, he has deliberately made the inmates insecure."
The Prisoners' Rights Protection Committee further alleges that he has also acted to cover up the aforesaid crimes that took place in the Anuradhapura prison on the evening of September 12.
"He has issued statements in the public media stating that no such incident has taken place. This is also an offence under the Sri Lankan Criminal Code (Penal Code)."
Prison media spokesman Chandana Ekanayake has also made statements to the media claiming that such a crime was not committed. “He too had taken steps to cover up the crime and that the law should be enforced against him as well.” the complaint further added.
"Accordingly, we call for the immediate arrest and investigation of Lohan Ratwatte, Thushara Upuldeniya and Chandana Ekanayake and request you to intervene to bring justice to the victims of this crime." it said.
The Committee to Protect Prisoners' Rights has requested the CID to take immediate steps to protect the CCTV footage of the Anuradhapura prison incident as there is a risk of it being deleted.
The Bar Association of Sri Lanka (BASL) has stated that Lohan Ratwatte and others who broke into the prison were committing a criminal act and that therefore he was not fit to hold a parliamentary seat.
"By resigning, Mr. Ratwatte has taken responsibility for his conduct. As a result, he has lost his moral right to hold any government post, ” said Rajiva Amarasuriya, secretary of the association. The Bar Association of Sri Lanka has urged the Attorney General and law enforcement authorities to take immediate action against him.