The statement issued yesterday (12) by the General Secretary of the Sri Lanka Podujana Peramuna (SLPP) Attorney-at-Law Sagara Kariyawasam which stated that Energy Minister Udaya Gammanpila must take complete responsibility for the fuel price increase and therefore must submit his resignation has come under heavy flak from senior Ministers of the ruling coalition, it is reported.

According to sources, Trade Minister Bandula Gunawardena and Agriculture Minister Mahindananda Aluthgamage, both members of the Cabinet Sub-Committee on Cost of Living as well as a few Ministers who aren't on good terms with Basil Rajapaksa, have contacted Minister Gammanpila and offered their support.

The statement by the SLPP General Secretary said that they have a suspicion as to whether this situation was created on purpose to create displeasure among the public regarding the party and its leaders.

The Wimal Weerawansa faction believes that this statement was released with the blessings of SLPP National Organiser Basil Rajapaksa.

Many senior Government Ministers have contacted Minister Udaya Gammanpila and criticized Basil Rajapaksa's role after the statement by the SLPP General Secretary was announced in the media, it has been reported.

A senior Minister when contacted said that it was the Ministry of Finance that had increased the fuel prices.

Noting that a fuel price increase is simply an addition to the tax currently levied by the government per litre of fuel, the senior Minister said that the 'subject' of taxation falls under the purview of Prime Minister Mahinda Rajapaksa in his capacity as the Minister of Finance.

The senior Minister further said that the isolated attack on Minister Udaya Gammanpila by certain sections of the Government over the fuel price hike was a breach of the principle of collective responsibility.

Minister Gammanpila said that a meeting of the Cabinet Sub-Committee on Cost of Living (CoL) was convened by President's Secretary Dr P.B. Jayasundera and the Sub-Committee had decided to revise the fuel prices.

When it was decided that Minister Gammanpila should announce the price increase, the Minister had stated that "I will have to bear the brunt of this." However, all Ministers who were present at the meeting including Namal Rajapaksa had stepped into allay any fears Minister Gammanpila may have had by assuring that this was a collective decision reached through consensus.

Meanwhile, it has been observed that many pro-government social media activists are lashing out at Basil Rajapaksa after SLPP General Secretary Sagara Kariyawasam's statement to the media yesterday (12). 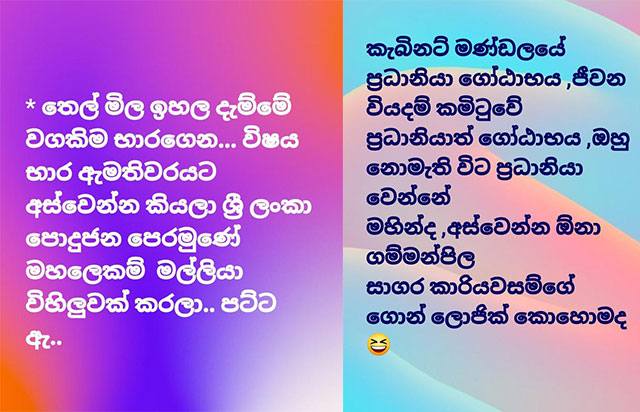 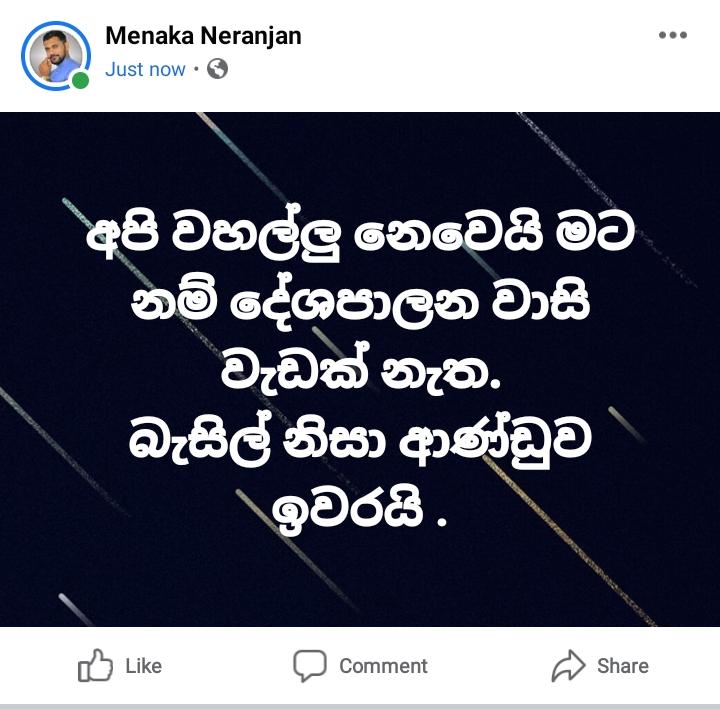 Meanwhile, Energy Minister Udaya Gammanpila has summoned a press briefing today (13) at the Ministry of Energy to respond to the statement issued by SLPP General Secretary.