A senior official of the Prime Minister's Media Division rejected news reports which claimed that Ministers Vasudeva Nanayakkara, Wimal Weerawansa and Udaya Gammanpila had walked out of the party leaders meeting held under the patronage of Premier Mahinda Rajapaksa today (19).

Social media was abuzz as many pro-government websites as well as other news sites had reported the incident. However, the senior official reiterated that all such reports were unfounded. 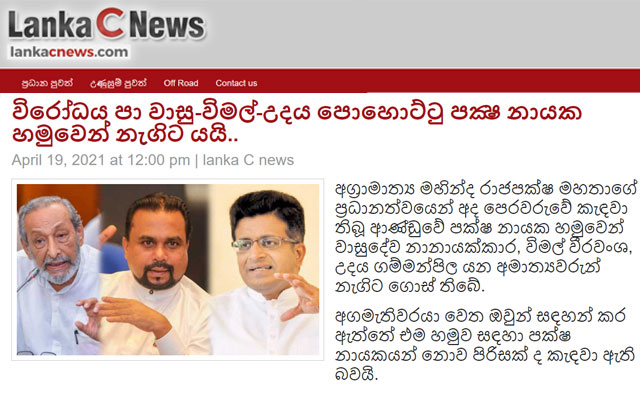 He further said that several party leaders, including Minister Wimal Weerawansa, had called on the Prime Minister today morning and had cordial discussions.

At the last Cabinet meeting, the President had sought the Prime Minister's intervention to resolve differences between the SLPP and other parties of the ruling alliance, especially with regard to the provincial council elections.

Minister Weerawansa had convened a meeting at his residence last night (18) to reach consensus on what issues need to be raised at their meeting with the Prime Minister.

It was revealed then that Basil Rajapaksa had extended an invitation to 50 parliamentarians of the ruling alliance to attend the meeting.

However, Wimal Weerawansa and the rest of the group had immediately decided not to attend today's meeting and had requested Yoshitha Rajapaksa to inform the Prime Minister in this regard.

The Prime Minister had instructed the group through Yoshitha Rajapaksa to meet him before 9.00 am today.

Accordingly, Minister Wimal Weerawansa and the rest of the party leaders who called on the Prime Minister in the morning had requested for a special discussion with him.

The Prime Minister had stated that there was no need to attend the meeting of ruling party MPs that was scheduled to be held in the morning and had promised to give them another date.

Accordingly, after the discussion with the Prime Minister, they left without attending the meeting of ruling party MPs.

However, it was reported that the leader of the Sri Lanka Freedom Party (SLFP), former President Maithripala Sirisena had participated in the meeting held today.

Meanwhile, an emergency meeting of the ruling party's parliamentary group will be held under the patronage of Prime Minister Mahinda Rajapaksa at Temple Trees at 6.30 pm today.

According to government sources, the controversy surrounding the Colombo Port City Economic Commission Bill is scheduled to be discussed at the meeting.

Furthermore, it is reported that a group of ministers and parliamentarians are preparing to make a request at today’s parliamentary group meeting to take disciplinary action against those who criticize the government while in the government.