Even the colour of a dress and a name board has become the eyesore of the Rajapaksa regime in Sri Lanka.

Sri Lankan Police has now threatened to slap the draconian Prevention of Terrorism Act (PTA) on a local council chairman in the northern Kilinochchi district if a street sign named after a social worker is not removed within 72 hours.

And, out of threat and fear the Karaichi Pradeshya Sabha was forced to pull down the sign board immediately.

On Friday (8) the Mayor of Jaffna Viswalingam Manivannan was arrested by Sri Lanka’s notorious Counter Terrorist Investigation Division (CTID) in the wee hours of the morning and subsequently released on bail by the magistrate’s court in Jaffna. The allegation was absurd-the local civil monitoring team formed by the Mayor had a uniform looked ‘similar’ to the now defunct LTTE’s police force uniform - and hence described as an ‘attempt to revive the LTTE’.

On Saturday, the Chairman of the Karaichi Pradeshiya Sabha in Killinochchi district, Arunachalam Vezhamalikithan was summoned by the police at 5 AM for an inquiry. When he visited the Police station around 8 AM he was accused of the same crime - ‘attempting to revive the LTTE’.

Apart from the allegation, the reason giving rise to it was even more ridiculous- the naming of a by lane after a social worker turned former LTTE cadre who died two years ago. Emmanuel Colinstas was a former member of the LTTE. His nom de guerre in the organisation was ‘Vetrikondan’ aka Vetri. Post war he was detained by the Sri Lankan army under a ‘rehabilitation’ programme. After the ‘rehabilitation’ and back in the society ‘Vetri’ was actively involved in local community as president of the community centre and part of the sports club providing training to the local youth.

According to locals, he devoted a lot of his time for the eradication of moonshine, known as ‘Kasippu’ and drugs from the area for which he was much appreciated. After the end of the civil war the sale and use of both drugs and ‘Kasippu’ have seen a rapid increase in the Northern Province.

The local populace of Karaichi say his role in almost eradicating them was ‘very significant’ which saved the lives of hundreds of young people. But unfortunately, ‘Vetri’ died in a road accident two years ago.

As a tribute to his services for the people Karaichi, the public and his family members requested a newly laid narrow street where he lived be named ‘Vetri street’.

“He had a very good name among the people so we had to honour the wishes of the public. We didn’t have the time to pass a resolution and gazette it. His death anniversary was fast approaching, so the sign board was symbolically declared open,” Vezhamalikithan told JDS.

The Kilinochchi police issued an ultimatum to the Pradeshya Sabha chairman on Saturday morning to remove the ‘Vetri Street’ name board within 72 hours or that he will be charged with ‘’trying to revive the LTTE’’ and detained under the PTA.

Fully aware of the draconian PTA and the realistic prospect of being charged under the act on flimsy reasons, the families have suggested the Pradeshya Sabha remove the name board.

“He is already dead, so please save yourselves’’ the family members of Vetri had told Arunachalam Vezhamalikithan. 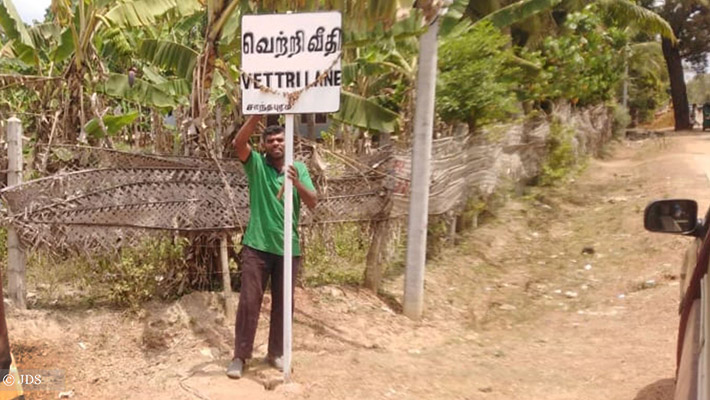 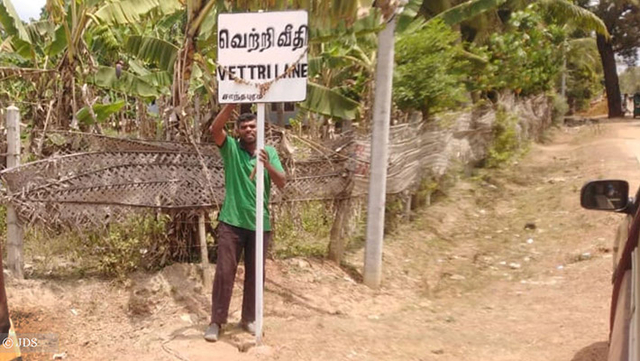 Subsequently, on instructions from the Pradheshiya Sabha, its workers were seen removing the board on Sunday morning.

“However, the Pradeshiya Sabha will bring a resolution to name the street after him and gazette it, and it would be called ‘Emmanuel Colinstas’ street,” Vezhamalikithan further told JDS.

Tamils in the North and East of the country have come under immense threat before and after the UNHRC resolution against Sri Lanka and PTA has been used in an arbitrary manner to intimidate war affected Tamils.