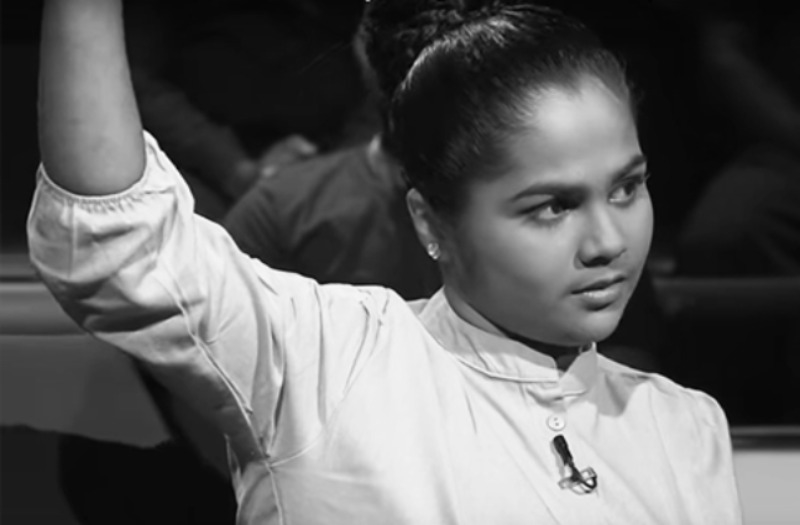 A Sri Lankan teenage girl has come under relentless harassment from politicians and state officials following her exposure of ongoing ecological damage to a UNESCO world heritage site caused by the tourism industry.

Police and forest officials took no time in rushing to 19-year-old Bhagya Abeyratne’s home the day after her passionate appeal to stop the construction of hotels bordering the Sinharaja rain forest reserve was aired on the Sri Lankan version of ‘Who Wants to be a Millionaire’.

A resident of the area, she described the unrestricted construction of hotels in the buffer zone of the tropical rainforest. Sinharaja was declared a world heritage site by UNESCO in 1988.

“I speak about the environmental destruction that I see with my own eyes, every morning and evening,” said a visibly moved Bhagya Abeyratne.

“I am not only speaking about vegetation. There is a large animal community living in that ecosystem. Destroying their habitat is like demolishing my house.”

From the audience her father said his daughter was determined to make use of the popular TV game show to expose the unhindered destruction.

“I am not sure whether we will be able to be safe at home after this,” said the senior Abeyratna.

Some social media activists have hailed Bhagya as Sri Lanka’s Greta Thunberg while others have slammed her as ‘thick headed’.

A week after the exposure the president himself slammed the media outlet that hosts the Who Wants to be a Millionaire as a ‘mafia’ that could do with a ‘lesson’.

“Media mafias are trying to control governments. That won't work with me. If it is necessary to teach them a lesson, I know how to do that,” President Gotabaya Rajapaksa told to a cheering audience at a state event held in the central highlands.

The media outlet hosting the game show, privately owned by Maharaja Television came under a major arson attack in 2009 when the current president was the powerful defence secretary in his brother Mahinda Rajapaksa’s government.

Located in south-west Sri Lanka, Sinharaja is the country's last viable area of primary tropical rainforest. According to UNESCO it is home to at least 139 endemic plant species. There is much endemic wildlife, especially birds, but the reserve is also home to 'over 50% of Sri Lanka's endemic species of mammals and butterflies, as well as many kinds of insects, reptiles, and rare amphibians.'

However, police and forest officials who rushed to her home seem to have other plans than finding the offender. While police have been going around the village collecting information about the family, forest officials went to interrogate Bhagya Abeyratne.

“Is the construction going on a state or private land?” asked one officer.

“I don’t have the legal knowledge to say whether it is private or state,” said Bhagya Abeyratne who asked the officers why they who have the authority don’t check it for themselves.

“There is a notice at the location that says this is an elephant corridor. The environmental destruction is happening there. Already one of the three giants who made this their habitat have gone missing. This is also home to the purple-faced langur. They will also be gone, soon. I raised my voice on behalf of harmless animals whose habitat has been demolished. Now I feel threatened.”

The government was making an effort to discredit the young environmentalist and justify the hotel construction claiming it was built on private property.

Addressing a public meeting, the Minister of Wildlife and Forest Conservation C.B Ratnayake told the young woman who sees the ongoing destruction with her own eyes, “to get her facts straight before talking.”

State TV broadcast Google images marking the construction site and the rainforest apparently situated away from each other. A document said to be a deed was displayed to show that the land was owned by Dulani Nilukshi Guruge, a businesswoman based in Colombo.

A closer inspection of the purported deed revealed that the land of nearly 8 acres was sold to its present owner by Warnakulasuriya Marius Jayavi Fernando around July 2020.

Jayavi Fernando had been an army platoon commander under Gotabaya Rajapaksa in the Rajarata Rifles Regiment during the early 80s. The regiment was disbanded due to its involvement in the 1983 anti-Tamil violence in Jaffna, before it was amalgamted with the 1st Battalion of Vijayabahu Infantry Regiment to form Gajaba Regiment in October 1983. Fernando later headed the Special Forces Regiment, but quit the army in 1998 owing to a dispute with the Chandrika Bandaranaike administration. 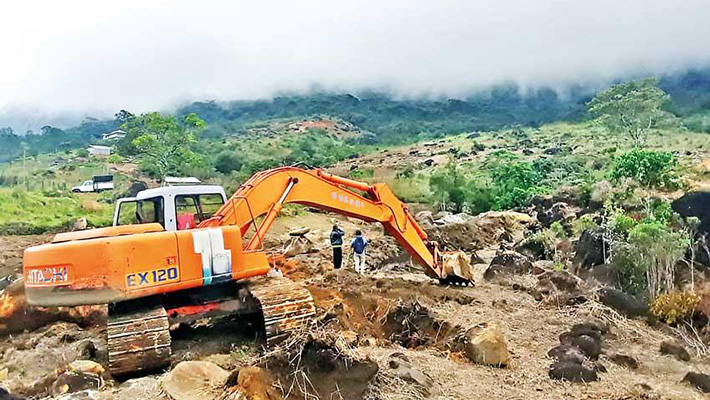 In 2004, Sri Lanka’s cabinet of ministers have decided to integrate the land in question to Sinharaja. The cabinet decision was to take over all the land located 500 meters from the rainforest edge. According to UNESCO 2,772 hectares of land is to be added to the forest reserve.

However, Colonel Fernando had purchased the land June 2019.

Activists refer to the country’s environmental legislation that makes it mandatory to obtain an environmental impact assessment (EIA) to fell trees in a land larger than two hectares.

Central Environmental Authority Chair Siripala Amarasinghe admitted that no EIA certificate has been obtained. However, he denied that the constructions in question are hotels.

Environment activists have raised their concern about the high-handed attitude of officials as a bid to intimidate Bhagya Abeyratne into silence.

The Movement for Land and Agricultural Reform (MONLAR) was alarmed by the police questioning of the young environmentalist.

“Police and state officials are trying to shut down the young woman instead of investigating the truth,” said MONLAR spokesman Sajeewa Chamikara.

“The environmental authority is trying to justify this crime. If the police really want to find the truth, they should do a field research. Police are well aware of this destruction for a long time. They have been given all the details from the very beginning.”

Environmentalists have pointed out that more than two hundred sites of ecological importance had come under attack during the past 18 months.

Exposures of environmental destruction have been brushed aside earlier by President Gotabaya Rajapaksa as “fake news fiction”.

However, using coercive methods to silence the environmentally concerned citizens who speak out against the state backed ecological destruction had been a common practice under consecutive administrations.

In October 2020, two journalists, Shanmugam Thavaseelan and Kanapathipillai Kumanan, were attacked by illegal loggers while they were covering illicit felling in the northern district of Mullaitivu.

In a similar incident, the village GS officer to the Iluppaikadavai area in Manthai West Divisional Secretariat, Mannar, S.Vijayendran, was hacked to death in November 2020, after he spoke out against the illegal sand mining taking place in the area.