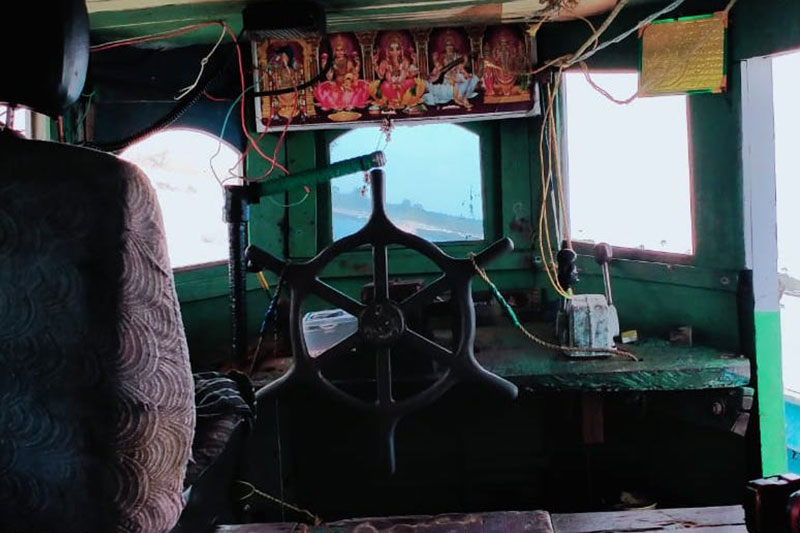 Four Indian fishermen who have reached home in Tamil Nadu after their boat stranded in the Jaffna coastal area are appealing to Sri Lankan authorities to release their vessel.

The four fishermen set sail from the coastal town of Pudukkottai in Tamil Nadu on Saturday morning (13) and during the night, the boat developed a technical snag.

The crew of four was trying to repair the boat bearing registration number IND.TN.08.MM.145 without anchoring when it drifted toward the Neduntheevu coast due to strong winds.

Subsequently, the boat allegedly hit the sand bar in the Neduntheevu coast and got grounded.

“Fearing arrest by the Sri Lanka Navy for trespassing into their territorial waters, the crew members called out for help from other boats who were part of the voyage to be rescued,” Tamil Nadu fishermen association leader Bencinglas Jesuraja said.

Shahul Hameed (21), Vetrivel (21), Noor Muhamed (21) and Marudhu on getting immediate help from rescue boats who started their journey with others returned to Tamil Nadu leaving behind their boat.

Jesuraja has now demanded that the Sri Lanka Navy return the boat immediately and say they have written to the Tamil Nadu fisheries authorities to take it up with the Sri Lankan government through the Federal government.

Fishermen from Northern Sri Lanka are opposed to Indian fishermen entering their waters for poaching.

However, they have reciprocated positively to a proposal from their Indian counterparts to hold direct talks to find a lasting solution to issues the fishermen of both nations face mid-sea.