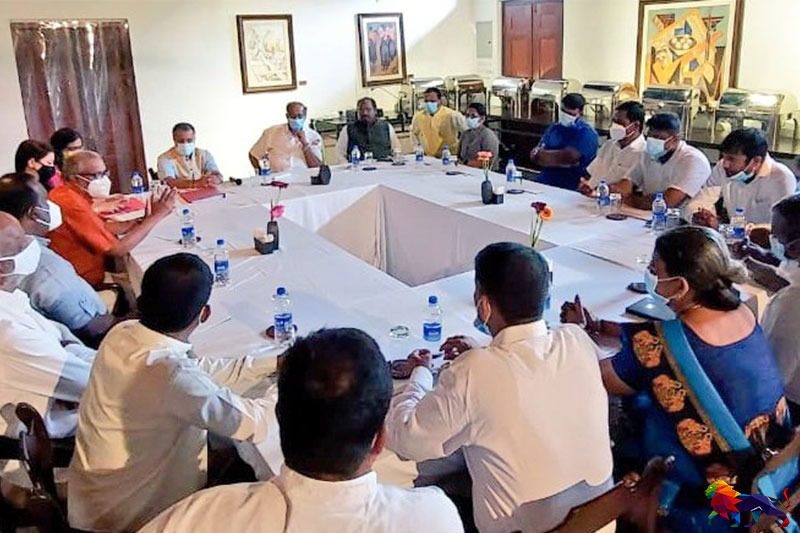 Since there is no firm commitment from the Sri Lanka Government on implementing the 13th Amendment and devolution of power to the North and the East, Indian High Commissioner Gopal Baglay has initiated a mission of reconciliation and restoration of democracy in the provinces.

He recalled commitments of the Government of Sri Lanka relating to the legitimate aspirations of the Tamil community for equality, justice, peace and dignity, and maintained that achieving them through meaningful devolution within a united Sri Lanka will also contribute to peace, reconciliation, inclusive progress and strength of the country.

He held a series of meetings with leaders of various political parties in Jaffna and Trincomalee on Saturday (13), the third day of his visit to the Northern and Eastern Provinces.

In the first of these meetings, Eelam People’s Democratic Party (EPDP) MP Kulasingam Dhileeban paid tribute to India for its consistent position on the implementation of the 13th Amendment, and requested more Indian assistance projects in Wanni electoral district.

An 8-member Tamil delegation of Tamil parties led by Tamil Makkal Thesiya Kootani leader C.V. Wigneswaran briefed the High Commissioner on current economic and political priorities. The High Commissioner appreciated in particular the suggestions for cooperation in the fields of waste management and skills development.

Parliamentarians Gajendrakumar Ponnambalam and Selvakumar Kajendran of the Tamil National People’s Front (TNPF) mentioned to the High Commissioner the priorities of TNPF for the North and the East.

The High Commissioner interacted with political leaders of the TNA from the Eastern Province, including R Shanakkiyan and President of Trincomalee district Mr. Kuhadasan in Trincomalee.

At these meetings, High Commissioner Baglay assured India’s continued engagement in development of the Eastern Province.

In all these meetings, Tamil leaders sought further assistance for infrastructural development, more economic investment and additional projects under grant assistance for development cooperation from India in the Province.

The High Commissioner assured his interlocutors of continued cooperation from India in these spheres. He highlighted India’s long-standing cooperation and commitment to the development of the Northern and Eastern Provinces in accordance with the requirements of the people and priorities set by their elected representatives..

The High Commissioner also visited the Kankesanthurai (KKS) harbour and took stock of the project to rehabilitate it with Indian assistance. When completed, the project will enable movement of goods and ferry from Kankesanthurai to India.