Days after the Muslims made an appeal to the visiting Pakistan leader, uncertainty looms over Sri Lanka as it has put on hold the reversal of a controversial mandatory order to cremate the bodies of all those who died of Covid-19.

On Thursday, the government announced the reversal of the forced cremation policy that gave much pain to Muslims. However, the Director General of Health Dr Asela Gunawardena told journalists in Colombo that the guidelines for burials will not be ready until next week.

Local protests, international pressure and a visiting Pakistan Premier striking an apparent deal with the Rajapaksa regime forced the government to pull back.

A passionate letter from the Muslim Left Front (MLF), handed to the Pakistani High Commission in Colombo, on Wednsday (24) expressed the concerns of the Muslim community, while coming out strongly that Pakistan should not support the Sri Lanka government at the top UN rights body currently in session at a cost to the Tamils who have suffered immensely during the war and its aftermath.

The letter reflects the anxiety of many that Muslim burial rights might be granted upon the request of PM Imran Khan to negotiate a deal supporting Sri Lanka government efforts to reject an upcoming resolution at the UNHRC session in Geneva.

'Not the act of a friend'

“This would not be the act of a friend to the people of Sri Lanka and come at the cost of the Tamil Community’s legitimate struggle to hold the state accountable for the heinous crimes committed against them”, the letter said.

It further stated, “Like Muslims, Tamils have been facing many challenges under successive regimes, especially the victims and family members of the enforced disappeared who have been demanding truth and justice”.

Recently Tamils and Muslims expressed their solidarity during the Pottuvil to Polikandy (P2P) rally seeking the global attention to their rights.

Raising concerns about continuous land grabbing, lack of accountability for war crimes, forced disappearance along with the cremation of those dead due to Covid-19 infection were among key points raised during the 5 day long P2P rally in the first week of February.

The MLF in their letter has highlighted the failure of the domestic justice for both Muslims and Tamils. This they say have prevented reconciliation in Sri Lanka and stopped the nation from moving forward towards a stable and secure future. 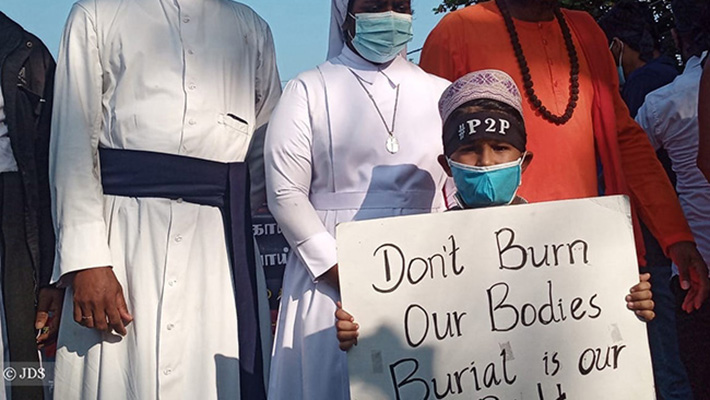 Whilst it is widely discussed that Sri Lanka sought the support of Pakistan to lobby the Organisation of Islamic Countries (OIC) to vote in its favour in the UNHRC session, the OIC Secretary-General in his address expressed their deep anguish against Sri Lanka.

“The OIC is concerned with the situation of Muslims in Sri Lanka as they are denied the rights to bury the bodies of virus victims,” said Yousef Al Othaimeen of Saudi Arabia. urged the Sri Lankan government to take swift action to guarantee and respect the right of burial of the Muslim community.

And this seems to have sent the Rajapaksa regime into panic mode and agreeing to bury those dead due to Covid infection.

Now that the ‘burning issue’ of forced cremation has been put on hold, the other issues faced by the Tamil and Muslim communities continue.

On March 22, the UNHRC is to vote on a resolution promoting reconciliation, accountability and human rights in Sri Lanka submitted by the United Kingdom, Canada, Germany, Malawi, Montenegro and North Macedonia.