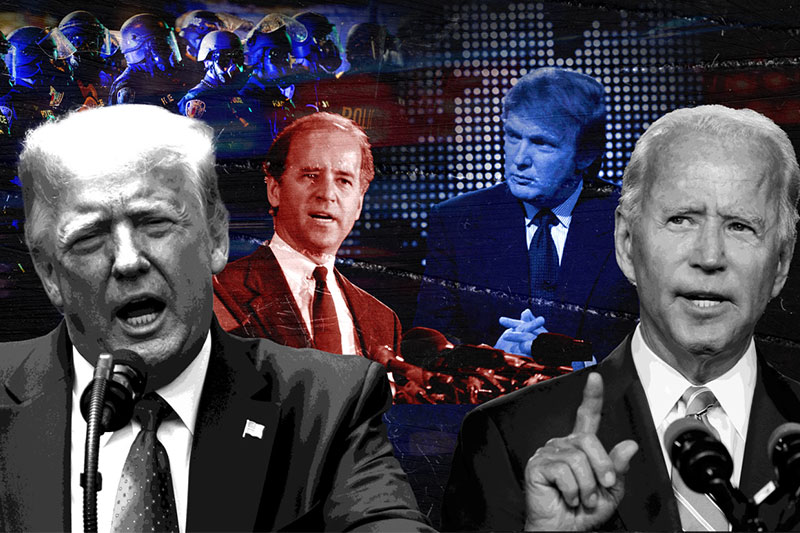 Joe Biden is to be sworn in as US president, taking the helm of a nation wracked by political division, economic anguish and an unrelenting pandemic.

Alongside him, Kamala Harris will make history when she is sworn in as the nation's first female vice-president.

Some 25,000 troops will guard the inauguration ceremony in Washington DC, which has been fortified after a deadly riot at the Capitol earlier this month.

Donald Trump will leave the White House for the last time, bound for Florida.

He will not be attending the inauguration ceremony.

Ahead of his inauguration Mr Biden on Wednesday set out 15 executive actions he would take immediately, covering climate, equality, immigration and coronavirus.

How will inauguration day unfold?

Mr Biden will be sworn in as 46th president of the United States by Supreme Court Chief Justice John Roberts shortly before midday (17:00 GMT) on Wednesday outside the US Capitol.

Due to Covid restrictions, the ceremony will be bereft of the cheering throngs of well-wishers traditional at inaugurations. It will also see extra-tight security after the US Capitol was breached by violent pro-Trump protesters on 6 January.

Among those present will be three former presidents: Barack Obama - whom Mr Biden served for eight years as vice-president - Bill Clinton and George W Bush.

Outgoing Vice-President Mike Pence will also attend the ceremony, skipping Mr Trump's farewell event at a military base outside the nation's capital.

Aides say Mr Biden, a Democrat, will use his inaugural address of about half an hour to deliver an optimistic call for national unity after his Republican predecessor's turbulent tenure. 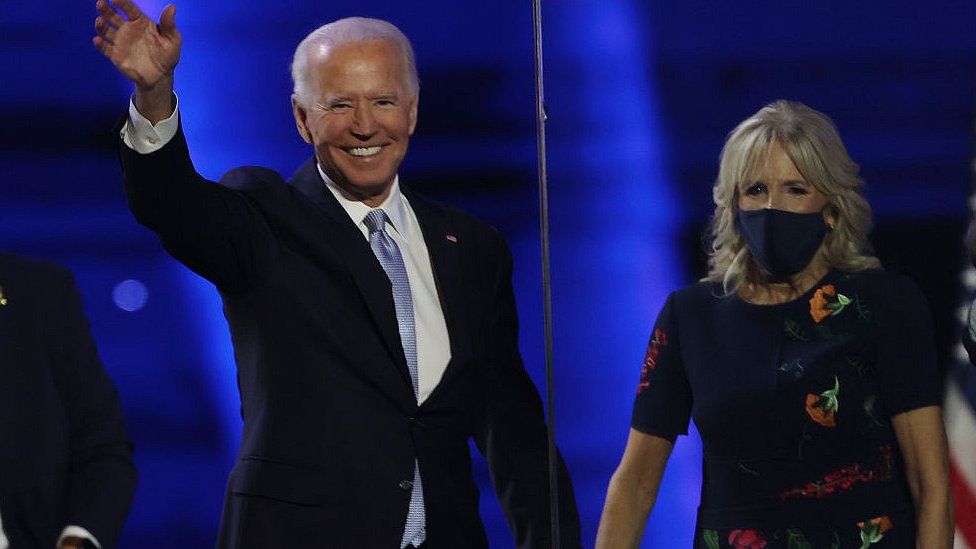 Joe Biden, pictured with his wife Jill, served as vice-president under Barack Obama

Minutes beforehand, Vice-President-elect Harris will be sworn in, becoming the first woman and the first black and Asian-American elevated to serve in a role a heartbeat from the presidency.

There will be musical performances from Lady Gaga - who will sing the national anthem - as well as Jennifer Lopez and Garth Brooks.

An evening concert at the Lincoln Memorial in the city will be hosted by Tom Hanks and include Bruce Springsteen, John Legend, Jon Bon Jovi, Justin Timberlake, and Demi Lovato.

Mr Biden, a Catholic, plans to attend Mass on Wednesday morning at a cathedral in the city with the four top congressional leaders - Republicans and Democrats.


What is Trump doing?

Mr Trump will become the first president not to attend his successor's inauguration since Andrew Johnson snubbed Ulysses S Grant in 1869.

He will host a farewell ceremony at Joint Base Andrews in Maryland on Wednesday morning before catching a final flight on Air Force One to begin post-presidential life at his Mar-a-Lago golf club in Palm Beach. 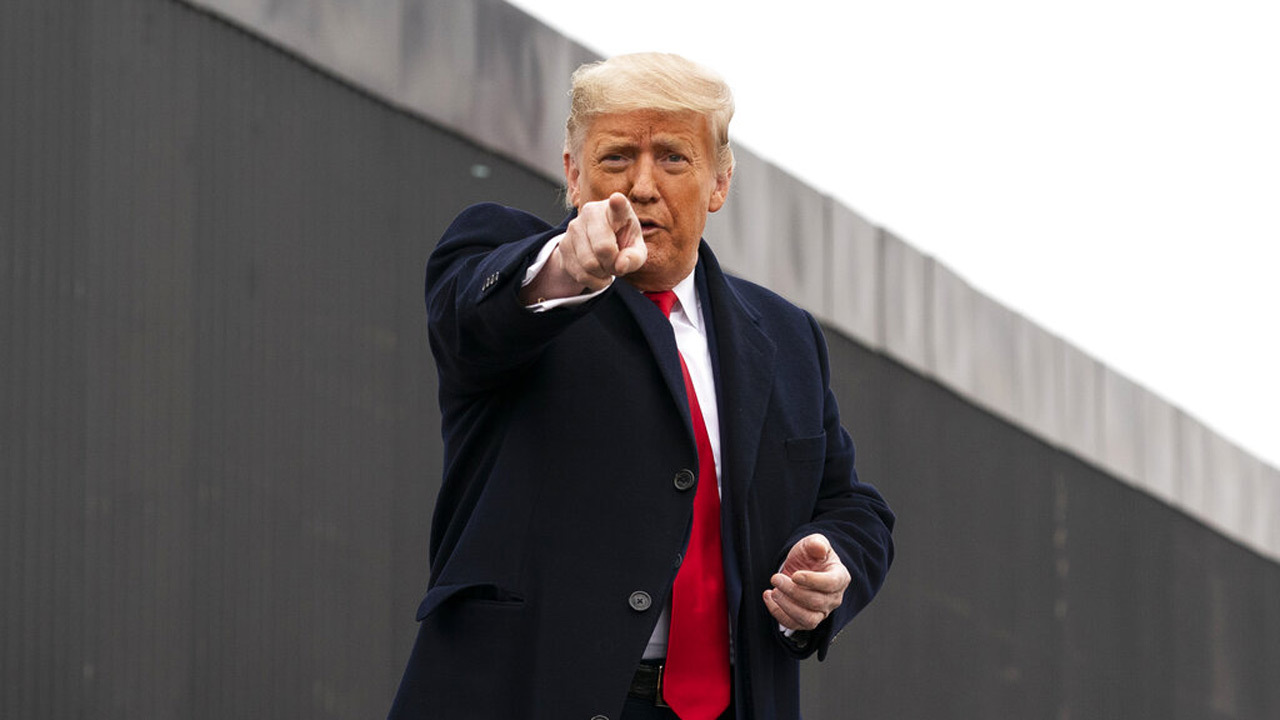 In his last hours, Mr Trump granted clemency to more than 140 people, including his former adviser Steve Bannon, who is facing fraud charges.

A pardon was announced for rapper Lil Wayne and commutations for rapper Kodak Black and former Detroit Mayor Kwame Kilpatrick.

In a farewell video message on Tuesday, Mr Trump called on Americans to pray for the incoming administration, though he did not mention his successor by name.

He said he was proud of what he had achieved over the past four years, highlighting his Middle East peace deals and his record as the first president in decades not to start any wars.

But the political drama surrounding him is far from over. The US Senate is expected to put him on trial soon, following his record second impeachment by the House of Representatives for allegedly inciting the Capitol riot.

On Tuesday, the Senate's Republican leader, Mitch McConnell, said the mob had been provoked by Mr Trump and fed lies.
What did Biden do on the eve of inauguration?

Mr Biden had planned to take an Amtrak train into Washington, as he did so often during his years as a veteran senator.

But amid all the heightened security, he instead opted to fly in a private plane to Joint Base Andrews.

On Tuesday evening, he and Ms Harris led a tribute at the reflecting pool in front of the Lincoln Memorial to the 400,000 Americans lost to Covid-19.

They were almost alone on the National Mall, where some 200,000 flags have been planted to represent the crowds who will be absent at Wednesday's inauguration.

Earlier on Tuesday, Mr Biden wept as he prepared to embark from his hometown of Wilmington, Delaware.

"These are dark times," he told dozens of supporters. "But there's always light."

On Tuesday night, Mr Biden stayed with his wife Jill in Blair House, a residence for heads of state and other important visitors across the road from the White House.
What will Biden do on his first day?

Mr Biden has set out a flurry of executive orders.

In a statement on Wednesday he said he would sign 15 orders after he is sworn in. They will:
- Reverse Mr Trump's withdrawal of the US from the Paris climate accord
- Revoke the presidential permit granted to the Keystone XL Pipeline, which is  opposed by environmentalists and Native American groups
- Revoke Trump policies on immigration enforcement and the emergency declaration that helped fund the construction of a Mexican border wall
- Bring about a mask and distancing mandate for federal employees and in federal buildings, and a new White House office on coronavirus
- End a travel ban on visitors from some, mainly Muslim, nations

Other orders will cover race and gender equality, along with climate issues.

Mr Biden's vice-president will swear in three new Democratic senators on Wednesday, leaving the upper chamber of Congress evenly split between the two main parties. This will allow the vice-president to act as a tie-breaker in key votes.

Mr Biden's legislative ambitions could be tempered by the slender majorities he holds in both the Senate and House of Representatives.