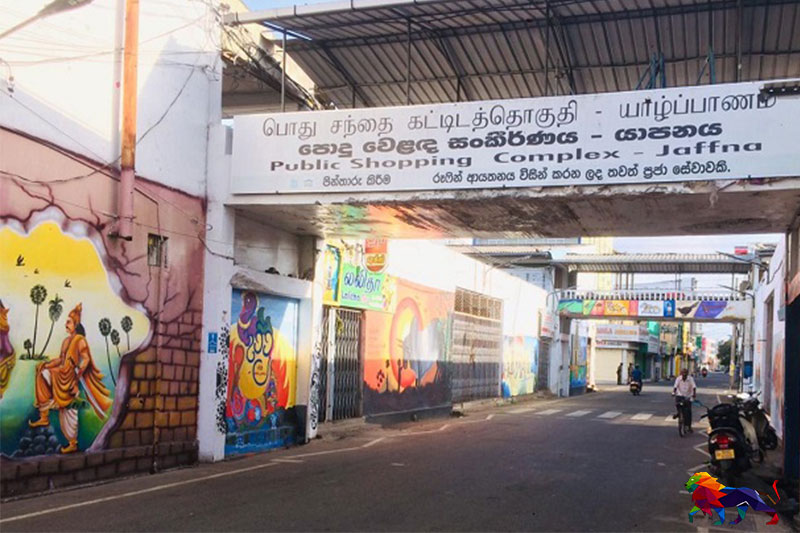 Sending a defiant message to the Rajapaksa government, Tamils and Muslims in Sri Lanka have extended their solidarity in the call for a total shutdown of the north and east

Behind locked gates under the cover of darkness on 8 January, authorities used heavy machinery to tear down the memorial for the war dead within the Jaffna university premises.

As widespread condemnations continue to pour in from within the country and abroad, leading Muslim parties have backed the call for the ‘Hartal’ announced by Tamils protesting the demolition.

“The Sri Lanka Muslim Congress (SLMC) requests the Muslims and its supporters in the north and east to join hands with fellow Tamils and support fully with the Hartal called against the insensitivity around memorialisation and treating the dead with dignity by the government and condemn the destruction for memorial monument for the dead in Jaffna University and forced cremation Muslim janazha (infected by Covid 19)” said Nizam Kariyappar, the party secretary. 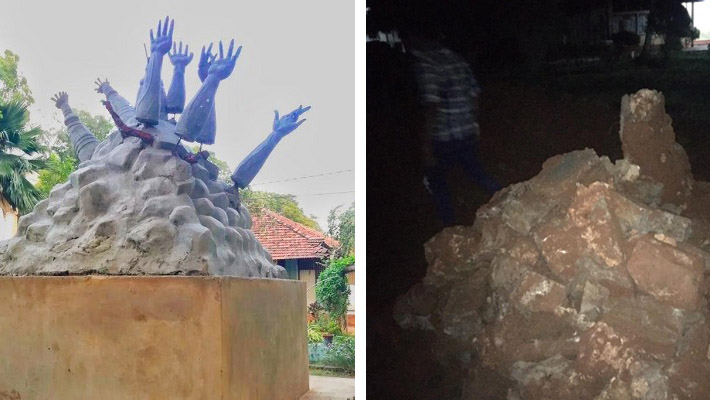 “I along with the members of the @acmcofficial strongly condemn the overnight indecent act of demolishing the Monuments at the University of #Jaffna. The rights and feelings of people belonging to any religion should be respected!!!” All Ceylon Makkal Congress (ACMC) Leader Rishad Bathiudeen tweeted.

Netizens have expressed their utter dismay and anguish at the despicable act of pulling down the memorial using heavy machinery in the dead of night. Videos and pictures showed heavy posse of armed Military, Police and Special Task Force (STF) personnel in their boots standing in an intimidating way against unarmed civilians who gathered to protect the monument.

Students fear for their lives

Jaffna university undergraduates who have launched a hunger strike in protest have appealed to universities and university students across the world to urge their governments to stop the Sri Lankan government from “abusing our human rights and to protect our basic human rights, respect and preserve our cultural identities.”

“The government of Sri Lanka has been planning to remove the memorial monuments within university parameters for several years,” the Jaffna University Students Union said in their appeal.

“Currently our campus premises are under heavy armed control, and we are prevented from entering our university. We are afraid for our lives and we cordially request your help to prevent this situation.”

The Vice Chancellor of the Jaffna University has told that he faced pressure from Sri Lanka’s security forces over the monument which was erected in 2019. According to him, the authorities have been asking the university to remove the structure.

Professor Sampath Amaratunge, the Chairman of the Universities Grant’s Commission (UGC), praising Jaffna VC S. Srisatkunaraja sais in a video statement “the VC has come to a conclusion that the monument is neither suitable for the present or for the future and decided to remove it from the campus”

Contradicting the UGC chairman the VC told the media, “I am a civilian carrying out an administrative responsibility and received instructions from higher authorities and the higher authorities were Sri Lanka’s defence, intelligence, education ministry, everyone”.

Taking to Twitter the Chief Minister of Tamil Nadu expressed shock and strong condemnation over the demolition.

“I strongly condemn this brutal act of the government of Sri Lanka that has caused great pain to the Tamils across the world and the Vice Chancellor for being complicit to this action” said Edappadi K Palaniswami.

Tagging the Indian PM’s office, Mk Stalin, leader of DMK tweeted, “As a continuation of the memorials of Eelam Tamils, the Mullivaikkal memorial in Jaffna University was demolished. I strongly condemn this. The PMO India should register its condemnation”.

The British Minister of State for the Commonwealth and South Asia, Lord Tariq Ahmad expressed his dissatisfaction over the demolition on Twitter.

“Deeply saddened by the scenes at the Jaffna University. It’s important that people are able to remember all the tragic victims of Sri Lanka’s conflict which help to heal the wounds of the past and support reconciliation”.

The leading Sinhala students organisation in Sri Lanka, the Inter University Student Federation (IUSF) too has strongly condemned the demolition and has called upon all those who respect democracy and humanity to oppose this arbitrary intervention.

It's convenor Ratkarawwe Jinarathna thero recalls the past where such monuments have been erected and say the people in the North should also have a right to commemorate the dead.

“People who died for common causes are commemorated in the south as well. Monuments are erected for this purpose. There are ample monuments to remember soldiers who have died in the thirty-year war. Events are held to commemorate them. Those in the north have a right to commemorate people whom they believe to have died while standing up for them, whatever the political ideologies maybe.”

The student Buddhist monk has accused the government and the UGC of trying to wipe their hands off by saying the demolition was carried by the university administration. “It is clearly evident that this is a premeditated act by the government” IUSF statement reads.

In recent times Tamils and Muslims have come together to mutually support each other. Muslims offered their support to families seeking the release of Tamil Political prisoners and Tamils have expressed their solidarity when Muslims protested the cremating of their dead due to Covid-19.

Tamil parliamentarians from North East have consistently condemned and challenged the forced cremation policy of the government.
(JDS)