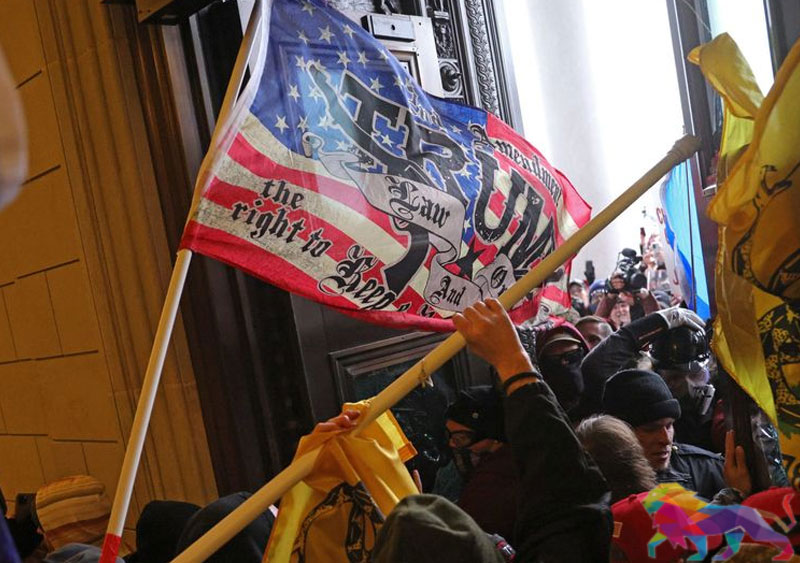 US President-elect Joe Biden has blasted the "insurrection" of pro-Trump supporters who stormed the US Congress in a riot that saw a woman shot dead.

The Democrat demanded outgoing President Donald Trump "step up" and repudiate the violence.

Mr Trump, who had urged the demonstrators to march on the Capitol, later called on them to "go home".

A joint session of Congress confirming Mr Biden's election win has resumed after it was suspended by the mayhem.

US Vice-President Mike Pence started the session on Wednesday evening, saying it had been a "dark day in the history of the United States Capitol".

Earlier, the protesters fought their way past police into the complex, shouting and waving Trump and US flags as they roamed the halls, demanding the results of the presidential election be overturned.

In stunning scenes beamed around the world, the invasion sent members of Congress scrambling for cover under their seats as a gunshot rang out and tear gas was fired in the Capitol Rotunda.

A female civilian who was shot inside the US Capitol during the chaos has died, a spokesperson for the Metropolitan Police Department said.

Federal law enforcement officials said two suspected explosive devices were found and were both rendered safe by the FBI and Capitol Hill police.

The rampage came as two Democrats won Senate seats in elections in Georgia, which shifted the balance of Congress to their party's effective political control, aiding the passage of Mr Biden's agenda after he is inaugurated on 20 January.

What did Biden say?

The Democrat, who defeated the Republican president in November's White House election, said the protesters' activity "borders on sedition".

Speaking from Wilmington, Delaware, he also said democracy was "under unprecedented assault".

"I call on President Trump to go on national television now to fulfil his oath and defend the Constitution and demand an end to this siege," he said.

"To storm the Capitol, to smash windows, to occupy offices on the floor of the United States Senate, rummaging through desks, on the House of Representatives, threatening the safety of duly elected officials.

"It's not a protest; it's an insurrection."

What did Trump say?

Mr Trump responded in a recorded video on Twitter, repeating his unproven claims of election fraud.

"I know your pain. I know you're hurt," said the president.

"We had an election that was stolen from us. It was a landslide election, and everyone knows it, especially the other side.

"But you have to go home now. We have to have peace."

For the first time, Twitter froze Mr Trump's account. The social media company announced it would keep the account locked for 12 hours, demanding he delete three tweets that it said could stoke violence and threatening "permanent suspension". Facebook and Instagram followed suit.

Earlier on Wednesday, Mr Trump addressed a "Save America Rally" outside the White House.

He had urged supporters to head to the Capitol and said: "Our country has had enough and we will not take it anymore."
What happened at the Capitol?

Little is known about the woman who died, but disturbing footage from the scene shows her slumped on the ground with blood on her face. Police have not yet released her identity and it is unclear who fired the shot.

Local US media have named her as a San Diego-area US Air Force veteran and Trump supporter, Ashli Babbitt.

The protesters surged up the Capitol steps at around 14:15 local time (19:15 GMT), shoving past barricades and officers in riot gear to penetrate the building. 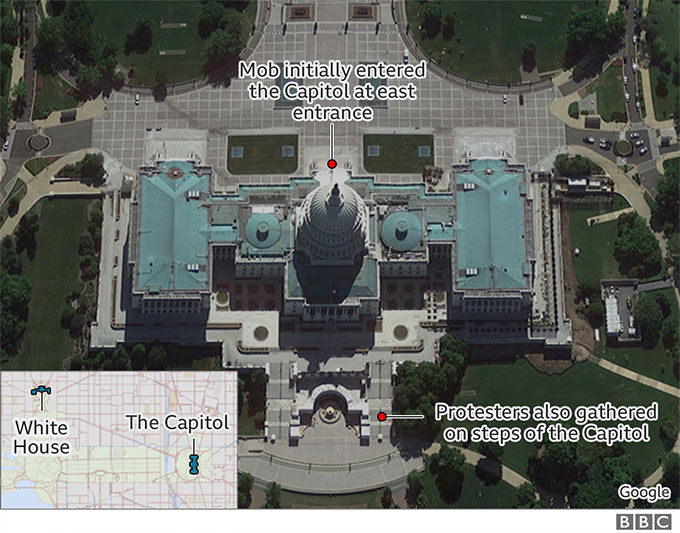 The mob - some of whom wore body armour - used chemical irritants to attack police, according to Washington Metropolitan Police Chief Robert Contee.

They marched through the building shouting "Where are they?" and chanting "We want Trump".

One climbed on to the Senate dais and shouted: "Trump won that election." Another protester was photographed sitting in House of Representatives Speaker Nancy Pelosi's office with a foot on the table.

Police with guns drawn piled furniture against the doors of the House chamber to keep protesters out.

Members of Congress - including Vice-President-elect Kamala Harris, who is a senator - were told to evacuate the building. 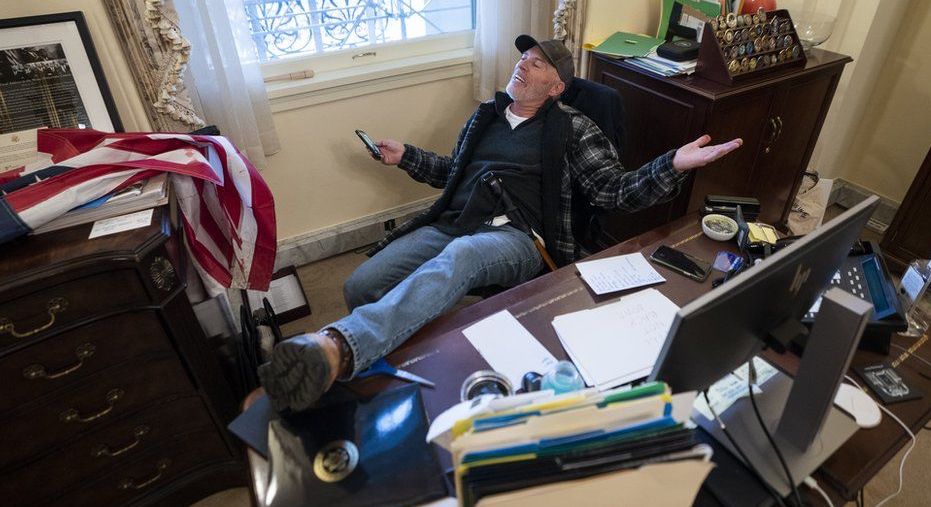 After sitting at the desk of US House Speaker Nancy Pelosi, one protester leaves a message reading "we will not back down".

After an occupation lasting several hours, the sergeant-at-arms - the executive office of the Senate - announced that the building had been secured by law enforcement.

Meanwhile, a suspicious device was found outside the Republican National Committee's headquarters, near the Capitol complex, and it was detonated by a bomb squad.

There were also protests at state legislatures in Kansas, Georgia, Utah and on the other side of the country in Oregon and the north-western state of Washington.