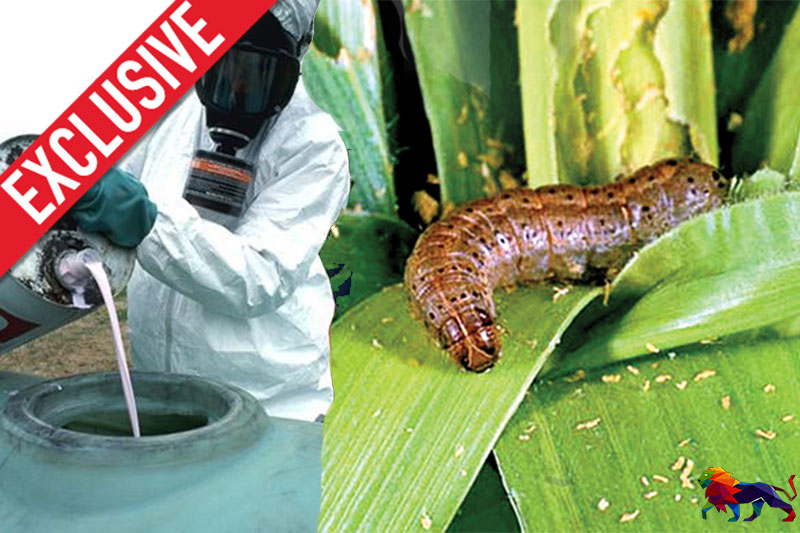 Rwanda has sent a team of military agronomists to Sri Lanka to assist with the government's efforts to mitigate the devastating impact caused by the Fall Armyworm.
This invasive species has threatened many crops including maize, legumes, sugarcane, vegetables and fruits. It is reported that the Rwandan Army's agronomists are planning to introduce 'Pyrethrum', a crude compound of Chrysanthemum Cinerariifolium plant which is analogous to several synthetic pyrethroid insecticides used in agriculture and public health.

However, the Registrar of Pesticides has warned that the introduction of 'Pyrethrum', would be extremely toxic to many species including bees, butterflies, fish and mammals.

The warning was conveyed by the Office of the Registrar of Pesticides to the Secretary to the Ministry of Agriculture following discussions with a six person team from Rwanda, including a Brigadier General of the Rwandan Army, at the Ministry of Agriculture.
The group arrived in Sri Lanka following a request made by President Gotabaya Rajapaksa to the President of Rwanda to conduct investigations into the Fall Armyworm menace that is spreading rapidly to many other cultivations, including maize and to submit necessary recommendations to control the infestation.

The group of six included Rwandan Brigadier General Fred Musiraguhara as well as local agricultural experts Alexis Rusagara and Jane Marie Viani Usumugura, state-owned 'Dinamina' reported today (02).
The President has invited the delegation to Sri Lanka at the request of the Chancellor of the Rajarata University and the Chief Incumbent of the Mirisawetiya Temple, Ven. Ethalwetunuwewe Gnanathilake Thero.

The group of Rwandan scientists left the island yesterday (01) after concluding their investigations in Anuradhapura and making the necessary recommendations to the Sri Lankan government.
Extremely toxic to animals ! 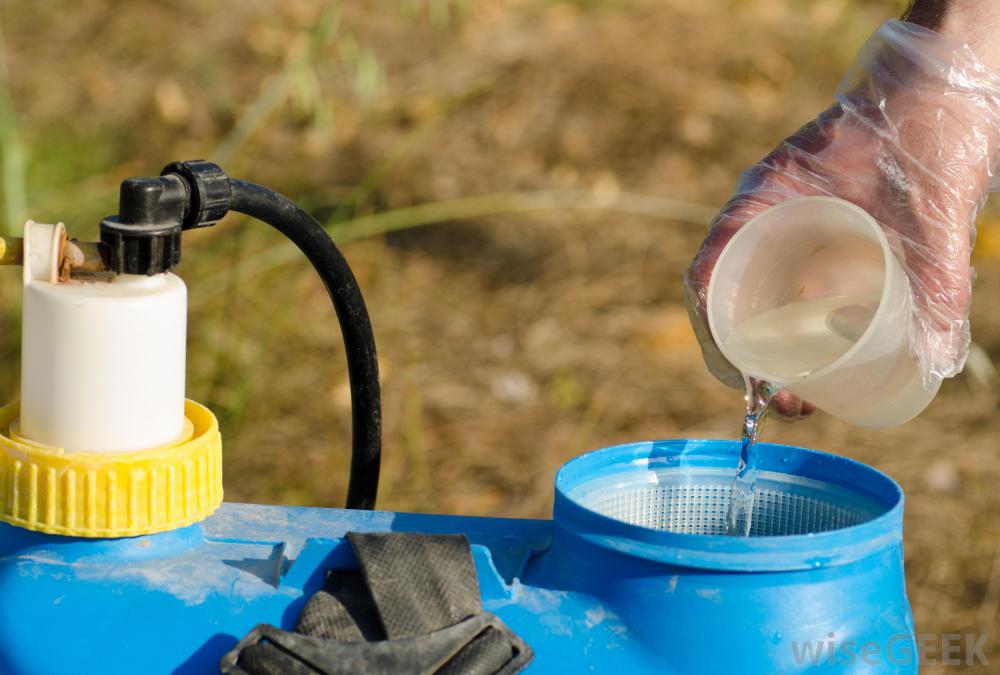 The Registrar of Pesticides, Dr. J.A. Sumith, has written to the Secretary of the Ministry of Agriculture on December 30.

"Pyrethrum is a crude compound of Chrysanthemum Cinerariofolium plant which is analogous to several currently registered synthetic pyrethroid insecticides in agriculture and public health.

Synthetic pyrethroids are severely restricted in use in Sri Lanka due to potential resistance development in mosquitoes (and other pests) that would disrupt the vector control programme of the country," he observed.

"Apart from that, pyrethroids insecticides including 'Pyrethrum' are extremely toxic to natural enemies in agriculture including honey bees. Currently, annual quota of 8000 liters of synthetic pyrethroids are allowed to be imported for managing brinjal shoot, pod borer and onion thrips under restricted conditions," he said.

"Therefore any impending decision for the use of 'Pyrethrum' against Fall Armyworm should be made under utmost caution by taking into consideration possible negative environmental impacts," the Registrar of Pesticides emphasised. 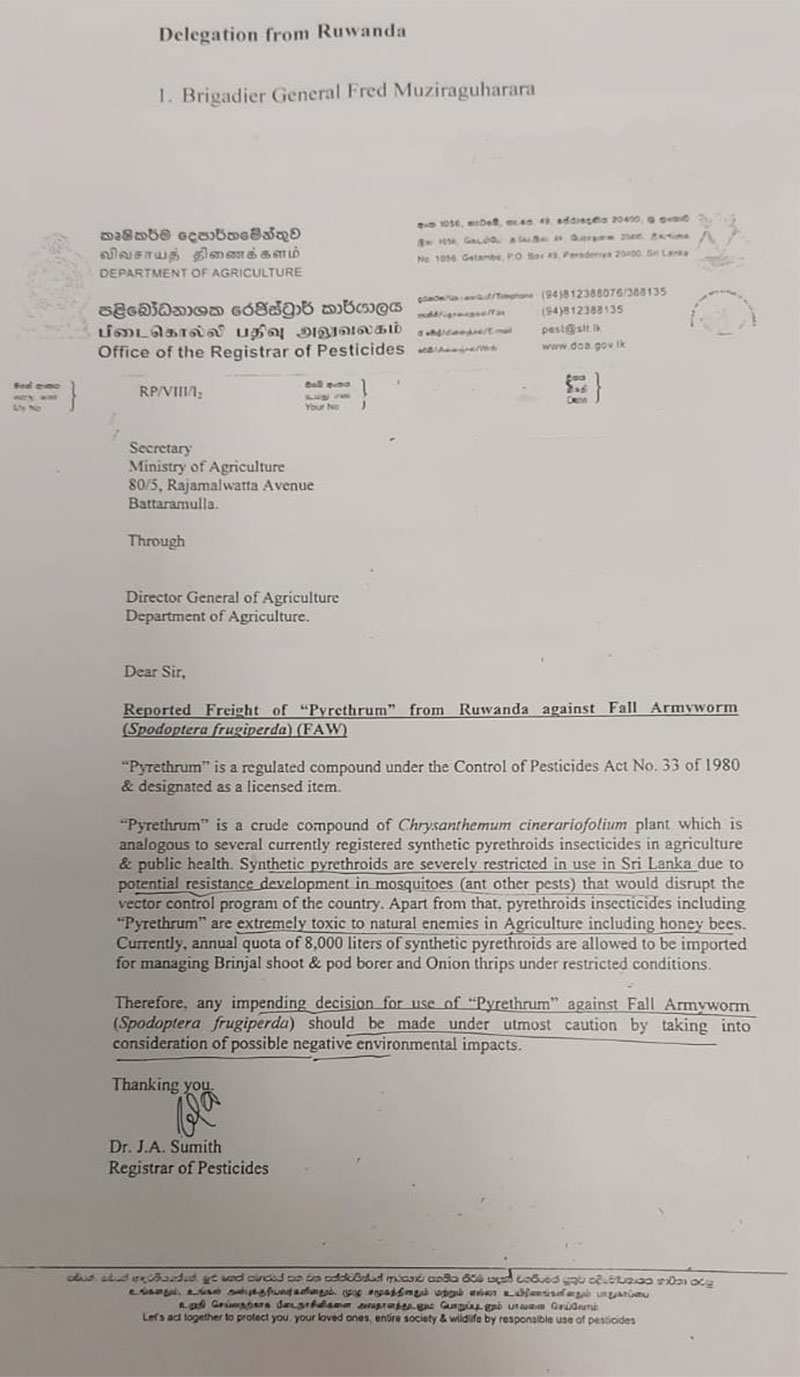 The arrival of a team of six scientists from Rwanda to conduct investigations and make necessary recommendations on the Fall Armyworm infestation which is now spreading rapidly to many crops have raised concerns within the government, it is reported.

01. Was Agriculture Minister Mahindananda Aluthgamage aware of the sudden arrival of a group of military experts from Rwanda?

However, it is reported that the Minister has given the group a discussion after it was reported that a group of experts had arrived at the Katunayake Airport.

02. Did the Army Commander exceed his jurisdiction by intervening in this matter?

Meanwhile, internal government sources said that the Army Commander, who is using the President's name to interfere in matters that don't fall under his purview, has  taken steps to bring down these Rwandan military personnel to Sri Lanka.

It is also reported that Minister Mahindananda Aluthgamage is deeply concerned with what has transpired.

03. Were PCR tests performed on the members of the Rwandan military?

Many on social media have questioned how the Rwandan military personnel, after arriving at the Katunayake airport, were taken to the Ministry of Agriculture within two hours without undergoing PCR tests.

However, the Director of the Gampaha District Health Services said that they were subjected to rapid antigen tests which turned out to be negative for COVID-19. Accordingly, the group was immediately released to conduct necessary investigations on the Fall Armyworm.

04. Aren't there any experts at the Ministry of Agriculture?

The Ministry of Agriculture is the only ministry with hundreds of PhD holders with international experience and as such, they have questioned as to why the country couldn't use our very own professionals and experts to control the infestation.

05. Did the Rwandan military group bring 'Pyrethrum' on the plane?

It was reported that the group of military experts had arrived in Sri Lanka on a private plane and that they had brought a consignment of 'Pyrethrum' unofficially along with diplomatic baggage to Sri Lanka without any prior notice.