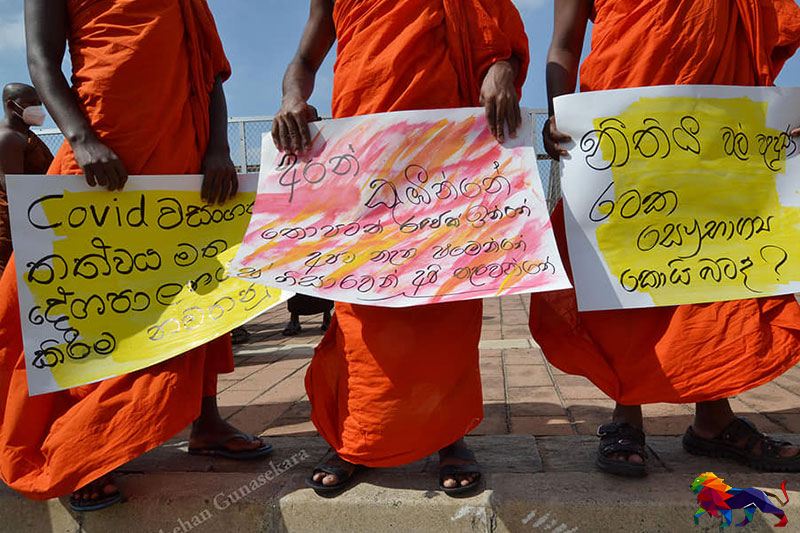 Sri Lanka government’s dogged policy on compulsory cremation of COVID-19 victims has driven a wedge through the country’s Buddhist monks.

A leading Buddhist chapter urged President Gotabaya Rajapaksa to review the forced cremation of Muslim bodies, while Sinhala hardliner monks took to the streets in the capital demanding not to grant burials rights to followers of Islam.

Disregarding internationally accepted World Health Organisation (WHO) guidelines, the government has imposed a strict cremation only rule for the Covid dead bringing much anguish to the Muslim community.

Two leading Buddhist prelates reportedly representing more than 20,000 monks have written to President Gotabaya Rajapaksa to reconsider the decision. The Sri Lanka Amarapura and Ramanna Samagri chapters have told that the government edict has no justification.

The government had announced its policy in April claiming that viruses from dead bodies could contaminate groundwater.

“However, more than 8 months later, and with a considerable body of research available regarding the nature of Covid virus, and results indicating that there is no danger of this virus spreading due to the burial of Covid19 dead bodies, we are of the opinion that there is no longer a justification for the mandatory cremation of persons who have died due to infection of Covid-19,” said general secretary of the Amarapura Chapter, Prof. Pallekande Rathanasara and general secretary of the Ramannna Chapter, Aththangane Sasanarathana in their letter dated 26 December to President Rajapaksa.

“At this time, we take the view that burials of persons who have died due to Covid19 infection should be allowed subject to certain conditions which would adequately protect the health of the people on one side and the religious practices of the Muslims, Catholics and other religious communities on the other.”

The letter endorsed by Islamic, Catholic, Christian and Hindu leaders recommend burial of Covid victims in “sealed coffins made of durable and impervious material placed in water sealed concrete graves or prefabricated water sealed concrete graves, in specified burial grounds,” with permission of the designated authority.
Monks against burials
Two days after the appeal, scores of pro Rajapaksa Buddhist monks led a protest in Colombo demanding that the government continue its policy of forced cremations.

Marching to the presidential secretariat from the Galle Face Green, the demonstrators handed over a petition to Health Minister Pavithra Wanniarachchi.

Akmeemana Dayaratne Thero of the Sinhala Ravaya accused Muslims of “trying to formulate laws according to their wishes.”

“We formed this government under the 'One Country-One Law' slogan. Laws cannot be formulated according to the wishes of Muslims,” he added.

Protesters carried placards saying, “No room for extremism, will the government bury and be buried, cremate all Covid dead”.

Bengamuwe Nalaka, another monk leading the protest, slammed the local and international appeals for burial rights as a demand to commit an illegal act.