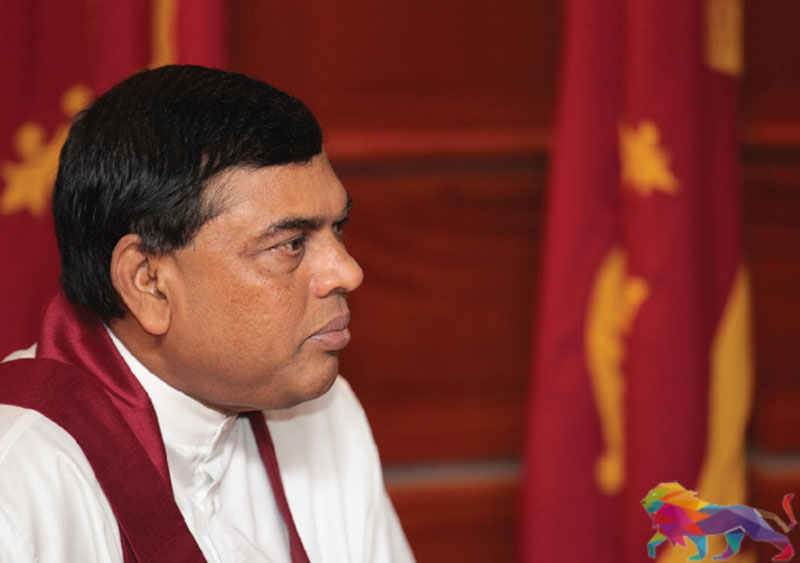 #The following article was featured on BUSINESS TODAY.

By Udeshi Amarasinghe
growth and social security & wellbeing of the people of the country has been the vision of Basil Rajapaksa, which he attempts to achieve through a beautifully crafted national development road map. This journey started in 2005 with the ‘Mahinda Chinthana’ and continues with ‘Vistas of Prosperity and Splendor’ where he has been the strongest pillar of implementation. He is results driven, a task master in action and a strong vision communicator to achieve congruence among his team. But above all he is a ‘modernist’, who believes in technology, innovation, creative thinking and new knowledge blended with conventional wisdom.

Basil Rajapaksa has been part of the political landscape of Sri Lanka since the 1970s where he has played many roles and achieved a number of milestones. From the Presidential elections of 2005, to 2010 and 2019, he has been the ‘Man behind the scene’. As a result, he is known as the ‘King Maker’. However, behind the so-called ‘King Maker’, is a man of vision, wisdom and action. 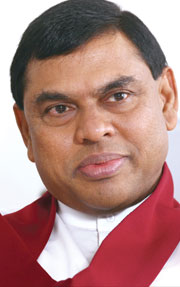 Basil Rajapaksa has been instrumental not only for the Presidential elections but also ensuring victory in General, Provincial and Local Government elections where he has been able to ensure political stability for the country. One unique leadership characteristic that comes out in his political career is that he is bold enough to allow victory to be shared, whereas he takes the wrath of defeat by himself. This thinking was evident when he accepted the defeat of the 2015 Presidential election and from thereon worked tirelessly to ensure the victory for the common mandate.

He created the SLPP as a common platform where a divided nation could unite under
strong Sri Lankan values... His planning is strategic in nature, holistic in spirit and futuristic in thinking.

The climax of his political career is the creation of a new political party, ‘Sri Lanka Podujana Peramuna (SLPP)’. He created the SLPP as a common platform where a divided nation could unite under strong Sri Lankan values. He also identified three issues to be addressed to take Sri Lanka to the next level, which included, National Security, Youth Aspiration and Economic Prosperity. Basil Rajapaksa also knew that for the three priority issues to be solved political stability was vital, which was challenged by the 19th Amendment. The formation of the SLPP and the affirmation of the people’s power lay ground for an amazing case study on ‘Transformational Leadership’.

The Sri Lanka Podujana Peramuna (SLPP) began its advent from the Local Council elections indicating its might as the representatives of the people. For the first time in the history of Sri Lanka a new party was able to have as its Presidential candidate a newcomer to the political arena and ensure victory as well. Creating history yet again the SLPP was able to acquire a resounding victory at the General Elections and secured a significant majority, which was deemed impossible with the electoral system, preferential representation, stipulated in the 1978 Constitution. President J R Jayewardene had said that no single party would be able to gain majority with this system. However, the impossible was achieved. It was former Minister Basil Rajapaksa that was the force behind these achievements. In fact, in 2015 during his imprisonment he detailed the plan and predicted the victorious outcome to Business Today. He never gave up but continued on his methodical plan. His planning is strategic in nature, holistic in spirit and futuristic in thinking. He is well-known for his astute leadership and political mind. He is a hard-worker and believes that ‘Nothing is Impossible’. The beauty is that Basil Rohana Rajapaksa has proven it repeatedly! 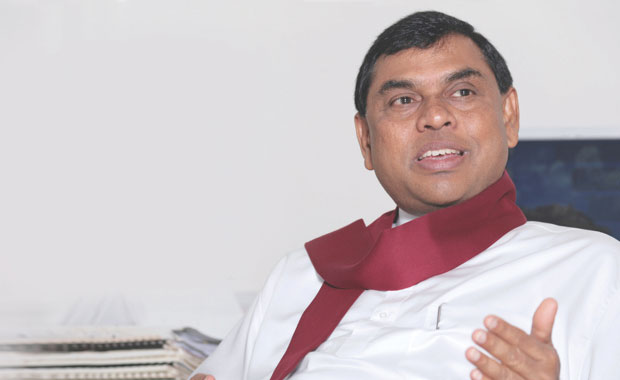 It is through his capabilities, as a strategist, negotiator and his ability to remain calm even through periods of uncertainty, that Basil Rajapaksa has been able to ensure the many victories of the SLPP.

Business Today has seen and experienced first hand his special aptitude and ability towards his work. Basil Rajapaksa knows no day, night nor holiday, he works tirelessly to achieve each task and he makes others work with the same vigor. If you ask him any facts or figures, his ability to reply immediately is indeed inspiring. He made a plan and ensured its success. It is through his capabilities, as a strategist, negotiator and his ability to remain calm even through periods of uncertainty, that Basil Rajapaksa has been able to ensure the many victories of the SLPP. He explained to Business Today beforehand how the country would turn. It is indeed an impressive story of how a new party succeeded and became victorious.

Basil Rajapaksa’s leadership philosophy is based on trust and commitment. This has won him a strong political network and a team with operational excellence.

Since 2005, through the Mahinda Chinthana and today with the Saubagyaye Dekmak, the Government has been fostering conditions of self-reliance and reviving non performing institutions. Furthermore, Divi Neguma came under the purview of Basil Rajapaksa. Traditionally, Sri Lanka was self sufficient as a country and also self sufficient as a family. Every household was in a way self sufficient. Through Divi Neguma this concept was introduced to the household so that they could be self-sufficient as much as possible. Such policies have been deemed invaluable in the current context that Sri Lanka and all other countries are facing.

The 20th amendment to the Constitution has been passed in Parliament with a 2/3 majority. The legislation has to be stable for a Government to function. The 20th amendment will enable stability that is required to ensure a strong Government and Executive Presidency to enable the economic journey that the country needs to progress upon.


Basil Rajapaksa’s leadership philosophy is based on trust and commitment. This has won him a strong political network and a team with operational excellence.


Business Today has been working closely with Basil Rajapaksa for more than a decade. He has been featured in the magazine frequently where we have highlighted him as the ‘Game Changer’ and the person who strengthens the nation and always thinks positively.

In 2010, the production of Rata Perata Yana Gamana, the tabloid featuring the achievements of President Mahinda Rajapaksa was a very important task, which was personally overlooked by Basil Rajapaksa. Coordination, compilation in Sinhala, Tamil and English, design and pre-press production of the tabloid was done by Business Today. Rata Perata Yana Gamana, ‘The Journey of Sri Lanka as it Moves Forward’ was a comprehensive document that described in detail the progress made by the UPFA Government under the helm of President Mahinda Rajapaksa. This document was done on the initiative of Basil Rajapaksa, who personally looked into all aspects and details of the publication. Working with him was an experience, his sharp acumen, meticulous planning and execution of tasks was inspiring. He would work throughout the day and night, ‘being tired’ did not seem to be part of his vocabulary.

Basil Rajapaksa has also been the Chief Guest at numerous Business Today TOP Corporate Awards ceremonies, and he was a Special Guest at the Awards Ceremony held in 2020. At each of these functions we spoke about Basil Rajapaksa, his hardworking nature, his skills and ability to think strategically. Further, his ability to break boundaries and perform where others have failed. He is a politician yet a diplomat, he has been able to secure the support of not only local opposition but also international donors and critiques. He is a meticulous planner, brilliant strategist, negotiator and above all a ‘great mind’ worthy of exploring. 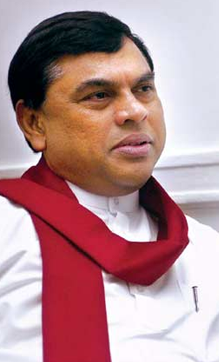 The ability to secure a 2/3 majority in Parliament to pass the 20th Amendment is another feat that no one has achieved before. Basil Rajapaksa is definitely the ‘Force Unseen’ that has ensured such success.

In August 2015, prior to the General Elections, the SLPP was at its inception and the team assigned with the duty of compiling the manifesto did not even have an office space. It was at the Business Today premises that the team of academics and professionals gathered, and it was the staff of Business Today that the team worked with day and night, tirelessly to develop the manifesto. This too was done under the guidance and direction of Basil Rajapaksa, who undoubtedly had a clear path and economic policy that the future Government would journey upon.

It is apparent that the vision for development for Sri Lanka has been consistent. Stability in Government and the Executive Presidency is required to make the decisions required for the country. From 2005 to 2014 Sri Lanka grew steadily, achieving self reliance in many areas. Furthermore, the home economy was stressed upon, which today in the COVID-19 environment has re-emerged as an important area. The much needed political stability is ensured through the 20th Amendment. His involvement with the special Presidential Task Force on Economic Revival and Poverty Eradication has already created an impact, which is a separate leadership story to report in a different forum.

We all realize the vacuum created in all spheres especially in the economy and defense by the absence of the Rajapaksas. The only growth that we saw in the country during the period of 2014-2019 was the Sri Lanka Podujana Peramuna under the leadership and guidance of Basil Rajapaksa.

Over the years Basil Rajapksa has achieved the impossible. From creating a new party (SLPP) to ensuring its victory in the Local, General and Presidential Elections is a task that no one has been able to succeed in realizing anywhere in the world. Furthermore, the ability to secure a 2/3 majority in Parliament to pass the 20th Amendment is another feat that no one has achieved before. Basil Rajapaksa is definitely the ‘Force Unseen’ that has ensured such success. Many big names in the political sphere in Sri Lanka attempted this but they failed. With the Business Today TOP 30 results being published in this issue, this is a lesson not only for the political sector but also for corporates especially in this challenging environment. The story of Basil Rajapaksa, should not only be limited to us Sri Lankans, it should be a lesson shared at the global level in corporate governance as well as creating political and social movements.

We are proud to be a part of Basil Rajapaksa’s team.