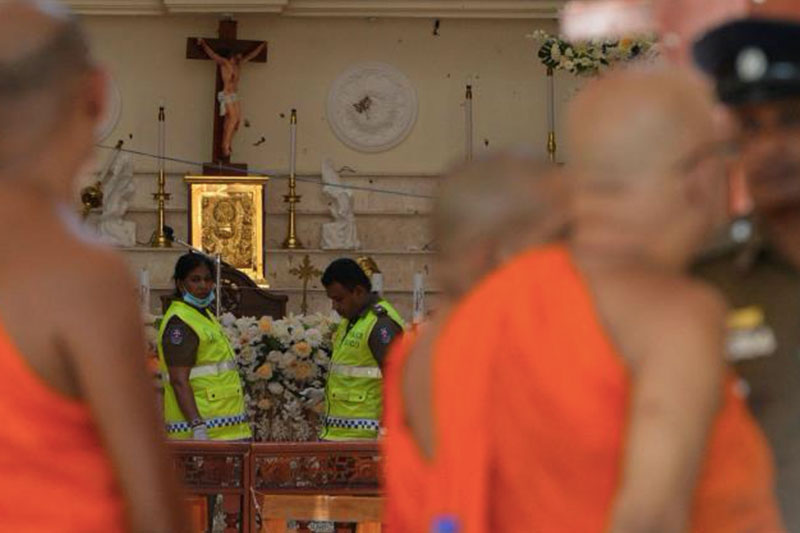 It is generally assumed we have passed the stone age, the bronze age, the iron age, the industrial age and the space age. After a breathtaking dive into the digital age, we are well on our way to the age of automation and artificial intelligence.

Not quite. In Sri Lanka, we are trapped in a new stone age. An age of stoning. Or to be precise, we are now in an age fascinated with the idea of stoning people to death.

The reader is invited to listen to the ‘Anusasana’ of the Most Ven. Warakagoda Sri Gnanarathana Thera, Mahanayake of the Asgiriya Chapter that is available on the internet.

Listening to the sermon of the erudite ecclesiastic who is emblematic of the faith that is now referred to as Sinhala Buddhism, it is evident that the Sinhala Buddhist mental makeup is well and truly fossilised in the stone age.

Intellectuals are judged not by the quality of their ideas. The benchmark applicable is the capacity of the audience to discern the truth from falsity. But that is not the case with institutional faith, moribund in feudal antiquity.

The idea of ‘Bana Preaching’ is that the ‘Bana Preacher’ knows best. The common Sinhala idiom that dismisses profound inanities as ‘Bana Talking’ is based on the premise that ‘Bana’ and banalities are not by definition accurate but considered appealing to the devout but not to the discerning. In short, reason and ‘bana’ are not always synonymous.

What did the Ven. prelate say? Did he advise the faithful to stone anybody? The answer is an emphatic ‘no’. He did not say that. But he seemed titillated by the idea.

He begins his homily by expressing his overwhelming delight on hearing the news that Chamal Rajapaksa will very soon become the President of the country. He goes on to advise parliamentarian Mayantha Dissanayake in the gathering, to cross over to the side that he considers to be the righteous to save and protect the country.

He makes a pointed reference to the plea made by Mayantha Dissanayake, where the young parliamentarian had urged the attendees not to discriminate against Muslims. That is the one instance where he utters the word Muslim. Henceforth it is the third person pronoun ‘they’ he relies on to identify the adversary of all Buddhists.

The Ven. prelate proceeds to assure us that he too endorsed the suggestion that Buddhists must not patronise Muslim shops and eateries.

He refers to a doctor from Matale who he claims had performed the heroic deed of obliterating several lakhs of our children. He asks: ‘What should we do with such traitors to the nation?’

With reverential religiosity he says, “I am reminded of a call made by some ‘Upsakamammas’ (female devotees) that such villains should be stoned to death. Now I am not saying that that is what we should do. But I say that that is the punishment they deserve.”

It would be wrong to say that the leading monk advocated the barbaric practice of stoning people to death. He merely found it to be a salutary idea.

That is the mistake we make, when we inject tribal religion into politics. If pure religious ideology and values such as empathy, tolerance and devotion to moral scruples are guiding principles, then we will certainly have a benevolent government. But that is not how it works.

The constitutional primacy accorded to Buddhism has been in practice a carte blanche for the institutionalised clergy to hold its grip on public credulity by wielding power without responsibility or accountability. What looked good on paper has lost its lustre. That is evident only if one cares to examine how it has really impacted real people.

We are not a theocracy and we must resist any move to make it one. We must acknowledge the reality of a Sinhala Buddhist majority. But we must not overestimate the influence of the priestly class on our politics.

We cannot decide who is ordained a monk or what should be the minimum standards observed by the wearer of robes. That said, we can at least strive to elect politicians who may be Sinhala Buddhists, but are practitioners of universal values.

The current cosy cohabitation between the Sangha institution and the political class is the result of the adulteration of positive Buddhist values over the years since Independence, The process of adulteration turned in to deliberate distortion by the myth we created, by claiming that we fought and triumphed in a humanitarian war.

Who are we? In this election year, we must define ourselves. How do we define citizenship? Are citizens to be classified according to faith? The answer is an emphatic ‘no’. Citizens form the entire political community. All citizens are inherently entitled to certain rights and also have certain duties towards the community.

Our society, we hope, is governed by the rule of law. And that is applicable to all including the Ven. Mahanayake theras. Our society is governed by accepted rules that precludes and prohibits randomness in application and arbitrary use for political purposes. Our democracy relies on representatives chosen in free and fair elections. We are not obliged to make Chamal Rajapaksa our next president, but the Mahanayake Thera of Asgiriya is free to vote for him and is also free to persuade others to follow him. But he must not or should not promise purgatory to Mayantha Dissanayake, if he chooses to do otherwise.

Mahinda Rajapaksa’s genius is that he has defined his persona in terms of a religious cosmology of his own. No other politician comes close to him. Hence the undisguised delight of the Mahanayake Thera of Asgiriya on the idea of a Chamal Rajapaksa’s proxy presidency.

Sri Lanka needs leaders who are not moved by religious cosmology in the age of automation and artificial intelligence. Politics is the business of addressing the ills of this world by practical measures. I live in hope. As Stephen Hawking who summed up the problem, we need not remain trapped in this archaic tribal world.

We must recognise evil when it appears. Evil is the moment when we lack the strength to be true to the good that compels us. It was heartening to learn that young Mayantha Dissanayake was driven by the good that compelled him to plead for understanding and tolerance.