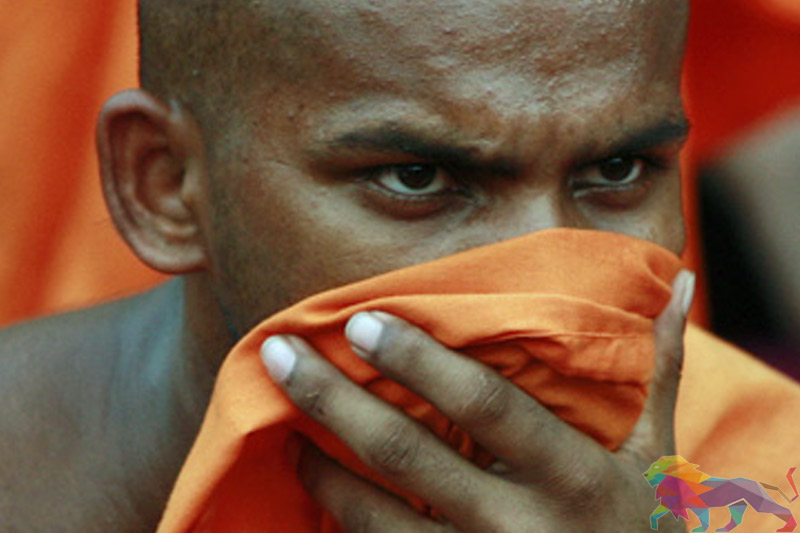 Merriam-Webster Dictionary defines a “Theocratic State” as a "government of a state by immediate divine guidance or by officials who are regarded as divinely guided."

Oxford English Dictionary defines it as "a system of government in which priests rule in the name of God or a god”.

These definitions are Euro centric. They would not define a “Buddhist” State run by a “Buddhist” cabal in a country like Sri Lanka as “Theocratic” with “Buddhism” having no God or a Goddess as its divine authority. Yet the essence of it politically, does apply to what’s being erected here as a “Sinhala Buddhist” rule. It can be extended to define “a system of government in which the hierarchy of the Buddhist clergy rules in the name of Buddhism either by proxy or directly” as a Sinhala Buddhist (SB) Theocratic State in Sri Lanka.

Despite historical “claims” with disputing historical records on the role of Buddhist monks in ancient Sinhala kingdoms, the question this society has to seriously answer is, “are we giving into extremist Buddhist monks to rule this country as they wish, in the name of Buddhism? Would not that lead to a Sinhala Buddhist (SB) Theocratic State?” The phenomenon of establishing a SB Theocratic State did not emerge during the past decade or two with extremist Buddhist monks and their violent mobs. It has a post independent history with Dharmapala’s anti colonial Sinhala bragging and the 1915 Sinhala – Muslim riots backed by Sinhala traders providing a “springboard”.

During British Colonial period every call for “independence” by Sinhala leaders basically was a call for the Sinhala Buddhists. For “Sinhala Buddhist” traders, “independence” from colonial rule meant gaining political power with a Sinhala Buddhist leadership. They therefore backed Bandaranayake’s “Sinhala Maha Sabha” (SMS) in 1947 to coalesce with D.S. Senanayake’s Ceylon National Congress in forming the United National Party (UNP). The political instrument colonial rulers wanted as the elected government to hand over political power.

In the first elected government in “Ceylon”, Bandaranayake was a key figure in disfranchising and decitizenizing the whole of the Indian origin plantation sector population in 1948. Meanwhile, his SMS with its theoretical activist H. Sri Nissanka was busy scheming and manipulating to put together a more radical Sinhala political party with Bandaranayake as its leader. That in fact was the main reason in Bandaranayake quitting his ministerial portfolio in the D.S. Senanayake’s UNP government in 1951 July, and crossing over to the opposition 08 months before the sudden demise of PM Senanayake on 21 March 1952. It was thus 08 months after Bandaranayake quit the UNP that led to a leadership struggle in the UNP. By then, the Sri Lanka Freedom Party (SLFP) had been launched in September 1951 to give political leadership to the Sinhala Buddhists.

The call for more political recognition to the majority Sinhala Buddhists, was backed by eminent Sinhala Buddhist personalities who were with the SMS. They proposed a “Buddhist Commission of Inquiry” to the D.S. Senanayake government, that agreed first but later rejected. Better known as the “Buddhist Commission”, it was established by the All Ceylon Buddhist Congress (ACBC) in April 1954 and funded by Sinhala Buddhist traders. Their public sessions held in most parts of the country, led to mobilising Sinhala Buddhist votes. Its report handed over to the Maha Sangha in February 1956 was accepted by Bandaranayake with a pledge he would implement it in full, if his coalition of political parties contesting as the MEP is elected to power at the 1956 April elections.

Bandaranayake as the newly elected PM immediately appointed a Committee headed by Venerable Madihe Pannasiha thera to implement recommendations of the Buddhist Commission on “Daham Pasel” (Dhamma schools conducted by Buddhist temples). That elevated Buddhist temples and monks to a new high as an influential segment in Sinhala Buddhist politics. It was in the making, all through Bandaranayake’s election campaigning in 1956 with “Sangha, Veda, Guru, Govi, Kamkaru” (Buddhist Sangha, Ayurvedic and Traditional medicinal practitioners, Teachers, Farmers and Workers) projected as his “Pancha Maha Balavegaya” (Five Main Forces). Interestingly, from the five social segments the least recognised was the organised “workers” while the appeal was very much for “rural” Sinhala Buddhist.

That politics made Sinhala the “only” official language in 1956 depriving the State from being inclusive. Thereafter Tamil medium education could not provide employment in the State sector. Within a decade, while Sinhala Language proficiency purged out Tamil public servants from the State administration, all new recruitments were from the Sinhala rural middle and lower classes that turned the whole State apparatus into a “Sinhala State”. The ideology of the State came to be fashioned on the perceptions of the “administrators” and “policymakers” who could only translate their own limited social experiences into functioning of the State in Sinhala. Though not politically discussed, the recognition of the two leading “Pirivenas”, Vidyodaya and Vidyalankara the teaching schools for novice Buddhist monks as fully-fledged State Universities, also gave valid social space for Buddhist monks to engage in student politics and activities, politicising the young Buddhist monks. All that was bouyed by mainstream Sinhala Buddhist politics led by the SLFP.

Ironically the once hard-line Trotskyite party the Lanka Sama Samaja Party (LSSP) which worked for a pan Indian Socialist revolution in mid 40’s as the Bolshevik Leninist Party of India (BLPI) had by early 60’s shed all its “revolutionary internationalism” to adopt itself in government with the SLFP. In coalition with the SLFP government from 1970, Dr. Colvin R de Silva a veteran LSSP leader and Minister of Constitutional Affairs provided State patronage to Buddhism as a Constitutional right for the first time in the first Republican Constitution of 1972. That accepted Buddhist monks above all other religious clergy and as a “legitimate entity” in advising the political leadership of the Sinhala Buddhist South. In turn it led to Buddhist monks openly involving themselves in student politics and in Southern Sinhala politics. It also led Sinhala political leaders wanting to prove to the Sinhala Buddhist constituency they are being advised by high priests of the Sangha making regular visits to Malwatte and Asgiriya in the company of the media. A political synergy that created a dominant Sinhala Buddhist social psyche.

Sri Lanka thus got dragged into thirty plus years of Sinhala Buddhist supremacy with increasing militarisation of the “Tamil National” question in the post 1977 era. During this period, Sinhala Buddhist psyche was elevated as the “patriotic national ideology” backed by Sinhala Buddhist business and trader community. They were after political power to control cashflow, instead of competing in a heavily consummerised, unrestricted open market economy. “Jathika Hela Urumaya” with their anti Tamil campaign through platforms like the “National Movement Against Terrorism” (NMAT) and “Sinhala VeeraVidhana” (SVV) that was more oriented towards Sinhala Buddhist businessmen, traders and professionals, tried to align with this emerging “Sinhala Buddhist patriotism”. They failed for they were in a hurry to gain political power and manipulated in getting into an alliance with the Rajapaksa regime and also because the open market consumerism allowed Buddhist temples to create their own income and become less dependent on devotees and more independent. On a reverse journey, with media and the political establishment developing the “Sinhala Buddhist society” into a “superstitious” one, Buddhist monks and the temple became important not only in politics, but in daily “lay life” too.

Within this violent context of a Sinhala Buddhist supremacist psyche, impunity is not merely a political factor of a government that leaves them as future investment for electoral gains. It is also that of the State with a Sinhala Buddhist ideology. This was very much in the open after the Easter Sunday attacks when the Police and the military cracked down on Islamic terror groups, while deployed to control violent Sinhala Buddhist mobs that went on a rampage in Kuliyapitia, Minuwangoda and adjacent areas. It was also evident in how laws were used against arrested Muslims as against Sinhala mobs and also in how the judiciary went about without questioning when “suspects” were produced in Courts. Post Easter Sunday, the State was thus exposed as a quasi Sinhala Buddhist, Theocratic State.