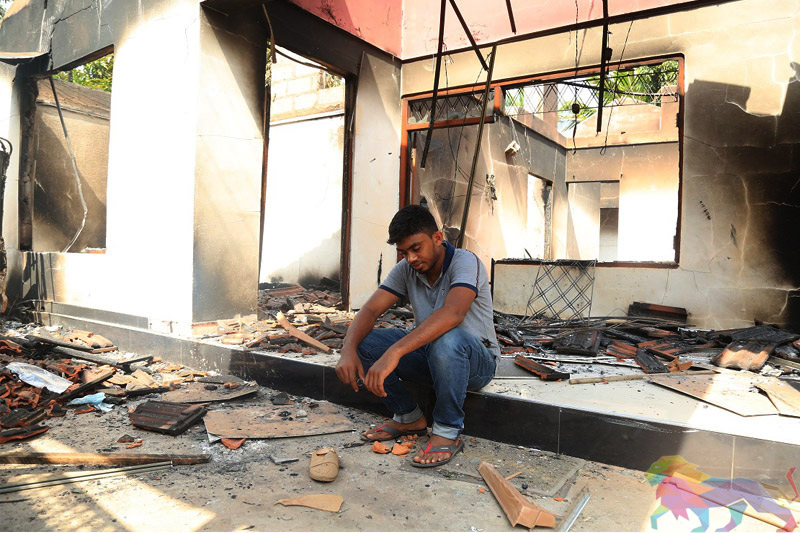 The wounds inflicted upon the body politic by the Easter Sunday bombings continue to fester and become more poisonous.

They are not going away as might have been hoped for, and as might have been expected, in a country where much is eventually swept under the carpet to be forgotten by all except the victims, which increasingly looks like the fate of those who died or went missing in the three decade long ethnic war.

The much debated transitional justice process, dealing with the human rights violations which took place during that period, which was being pushed forward by initiatives from the international community, appears to have been derailed at this time, with political attention shifting to the Easter Sunday bombings and their fallout.

Two months after the six deadly bomb blasts that claimed the lives of 255 persons, polarisation between the country’s ethnic and religious communities continues to grow at a rapid pace. Even local government institutions are being subjected to division, with Tamils and Sinhalese joining hands in the eastern town of Kalmunai to demand an equal local government to match the one currently dominated by Muslims.

The highest ranking religious clergy are not immune to this polarisation that has the capacity to misguide them away from more universal values they are expected to uphold. One of the prelates recently called for an economic boycott of Muslim businesses. He has even said that the stoning to death of suspected offenders, on the other side of the divide, who are suspected to have engaged in illegal practices that are suspected to have cost many thousands of potential lives, is something that needs to happen.

It all sounds so irrational but it is deadly serious, because the mind is the forerunner of all states of being, and if we believe in absurdities we will be capable of atrocities. This includes mass riots and collective crimes against communities. These have happened in Sri Lanka and they have happened elsewhere. In Rwanda, people were described as cockroaches and a million were eliminated in a few days because they belonged to another ethnic community, though they shared the same religion.

Ten years after the end of the end of Sri Lanka’s three decade long war, Sri Lankans thought that our hard-earned peace would be sustained. But it collapsed in the debris of the Easter Sunday bombing of Christians by Muslim extremists which had no internal logic.

Today we are reminded in different ways of how close we are to the brink. A colleague recounted this morning that a traffic policeman who apprehended him had also warned him that there was intelligence information of a possible attack, though it was not specified what type of attack or where.

There was supposed to be a larger presence of police on the ground on Sunday as a result, but there was no attack. If another bomb were indeed to go off, and take with it many lives, there could be a sudden descent into chaos.

An acquaintance referred to the discovery of many swords in the places of worship and homes of Muslims, which boded ill for the rest of the country. He spoke about the violent practice in “Muslim countries” of chopping off the limbs of those convicted of wrongdoing.

Not content with stopping at the issue of swords in the present day, my acquaintance also referred back two millennia, to the time of the great Buddhist kingdoms of India, and to the ancient Buddhist university at Nalanda which was looted, burned and utterly destroyed by invading Muslims who also slayed thousands of Buddhist monks.

He had no good faith or trust in the goodwill of Muslims towards Buddhists. On the contrary there is the irrational fear that continues to remain deeply entrenched in the psyche of many people, such as rumours that eating food prepared by Muslims can be dangerous on account of infertility drugs introduced to render non-Muslims sterile and unable to reproduce their communities.

Indeed, I have noted that when I express my conviction that it is not possible for a single doctor to sterilise thousands of women in the course of Caesarean operations, most of those I address remain dead silent, which makes me wonder if they think it is indeed possible and the truth.

The government has appointed an investigation committee comprising medical specialists in the field but there are protest marches being organised saying this is not enough. I say that I am sure that the story of the doctor sterilising women is implausible because he would be in the midst of teams of doctors and nurses who would be observing every step of the Caesarean procedure.

But I am aware that my audience may be rejecting my views.

The tragedy is that this situation of polarisation, mistrust and hateful speech is likely to get worse and not better. There are two reasons for this. One is that business rivalries at the local and national levels make it advantageous to spread misinformation that causes one community to perpetrate economic boycotts upon the other, even at though it adds to the hatred and mistrust on both sides of the divide.

The second reason is that the country is careening into election mode, where each side is preparing to win by any means possible including whipping up inter-religious and inter-ethnic hatred. This accords with the long observed strategy of politicians who promote such negative sentiments because that can yield the harvest of votes that politicians so greedily want to prevail at the hustings.

In these deeply troubled circumstances, it is incumbent upon the rational elements in civil society to try and fill the vacuum of a speedy mass education campaign that the government and leaders of all political parties should be carrying out but are not. In particular, Muslim civil society needs to come out and publicly affirm that they do not subscribe to the agenda of the Islamic-State affiliated bombers when Sri Lanka is their home. Not once or twice, but all the time until the crisis ends as it will.

There is a special need to advertise widely that swords were found in only two out of several thousand mosques, and that it is not true that they were found in a large number of mosques.

The canard about infertility-inducing drugs being found in food distributed by Muslims needs to be similarly exposed.

They need to be advertised and broadcast on multiple news channels and in both print and electronic media. The millions and billions of rupees that business companies spend on their advertising campaigns need to be devoted to this more urgent and needed purpose.

This mass education campaign needs to be powerful enough to counter the political and social media campaigns of those who seek to widen the rift between the communities for their own purposes. It will need to be carried out at least until the presidential and general elections are completed, and a new government leadership comes to power that, hopefully, will have the moral vision and credibility to speak the truth and counter the untruths that now dominate the thinking of masses of people.