Wilfred Owen, among English poets in the early part of the 20th Century, wrote about war’s futility.

More importantly he had in his sights the point of view of the soldier — it is theirs not to reason why but merely to do and die. The declaration of war is the business of politicians. Soldiers have to fight. They die. Futile or otherwise, those who ‘die like cattle’ as Owen described it in ‘Anthem for Doomed Youth,’ are not accorded ‘passing bells’ apart from ‘the monstrous anger of the guns,’ and ‘only the stuttering rifles' rapid rattle,’ [which] ‘patter out their hasty orisons.’

The higher ranked officers, especially the generals and of course the commanders, are remembered, even more so if they delivered or have been instrumental in delivering ‘victory,’ as are the political leaders associated with such happy moments. The soldier is forgotten. Forgotten also are the officers, generals and commanders included, who came before. Never mind that they led soldiers or fought under less auspicious circumstances than final victory. Their triumphs are always eclipsed by the victorious conclusion for the winning side. They may not have had the required complement of human resources. They may not have had the hardware. Sophisticated intelligence they may have lacked. They may not have had the benefit of many other important factors like political will or public support. They are remembered mostly by family and friends, just like the nondescript soldier who remains nameless even when lionised by poets like Owen. 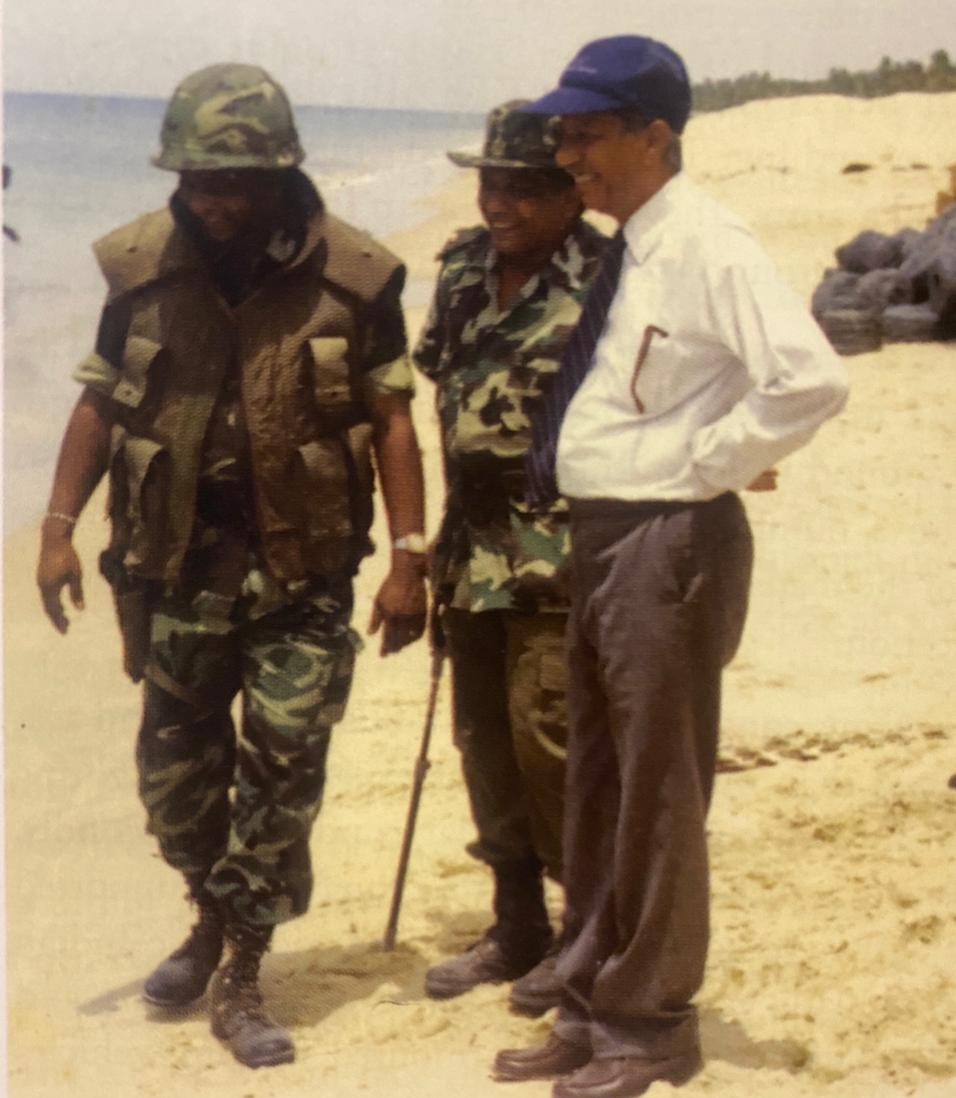 With Major. Gen. Denzil Kobbekaduwa and Brigadier Wijaya Wimalaratne during a visit as Defence Secretary to the North.

I remember General Cyril Ranatunga. His military record is easily obtained with a simple online search. His career, the various designations and honours conferred on him, are all there. The details of engagement as a soldier and officer of course are missing for such things are the meat of biographies, not sketches on the Internet.

I am no biographer. I can say that I have known of General Ranatunga. I can also say I knew him. He was the father of my good friend Rajind and it is this association through which I measure the man. He always spoke with precision and stuck to facts. There was no exaggeration. Nothing was over-dramatized. And with nothing more than the truth at his disposal, he still had stories to tell which seized and held the undivided attention of his audience.

There are a few other things that have become imprinted in my mind that come to me whenever I think of General Ranatunga. He loved the Army. He loved our country. He spoke passionately about both and frequently thought about and talked about the future. The things he did in his official capacity as, both an officer and as Secretary, Ministry of Defense, may or may not be known, but I feel he would not begrudge the ignorance of the beneficiaries.

General Ranatunga, after all, was not a “I, me and myself” kind of person. It was always “we” and “us” when he described achievements and good times. He respected his superiors and treated subordinates well, never once treading on their self-respect and sense of dignity. He was an administrator of rare efficiency. His strength was his ability to command and manage people. He loved a challenge, and in all engagements big and small, his commitment, patience and ability to work as a team was amply demonstrated. He was willing to listen to anyone and everyone. He was probably conscious that he was not an exception to the truism that human beings are frail. He was, in short, a man who could play any role expected of him. Those who were part of his professional world would no doubt concur. He was mature. He was dignified. He was humble at all times.

He loved Sri Lanka and did his utmost to the best of his knowledge and ability to craft a nation which future generations could be proud of and be happy and content in. Such efforts too would have mostly gone unnoticed and unappreciated, but again I don’t think he would have minded. After all, it was General Ranatunga’s way of life to focus on results over attention, substance over style. The essence of his contribution to his country and her people is best evidenced in the character of his children. They stand today as examples of the human qualities he cultivated in others and devoted a lifetime to embodying in his own actions.

Rajind and his brother Niran have always conducted themselves with the same dignity and humility that was the signature of their father’s record as a soldier, administrator and human being. The Ranatungas never fear to express their opinions candidly, frankly and sincerely. They passionately love their country and are devoted to the institutions they serve. In all the time I have known them, I have found their loyalty to be extraordinary. They are unbelievably kind and sensitive. They gravitate naturally towards people who are honest and sincere, and are repelled by power, corruption and heartlessness. If you are true to their moral code, they will stand by your side even if it means standing against the entire world.

General Ranatunga passed away on June 16 at the age of 91. It is no accident that the newspapers were not filled with detailed eulogies praising the man who served as a soldier, defence secretary and diplomat over a 44-year career. General Ranatunga who abhorred self-advertisement isn't talked about much. They are remembered by those whose lives they touched, by those near and dear. I feel he would think, “that’s how it should be, it’s best this way.” General Ranatunga hailed from a generation of public-spirited citizens whose entire raison d'être is to serve. He and his children embody a mindset of “born to serve not be served.” In an era of entitlement, corruption and greed, exemplary public servants of his calibre are direly needed, and sorely missed.