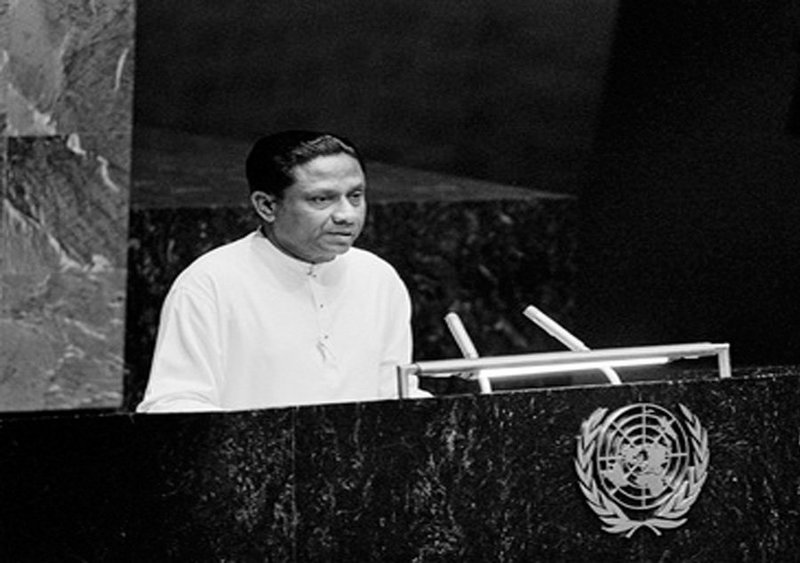 Indeed, my opinions about his policies and style of governance were a permanent source of friction between myself and his Press Secretary of thirty years, my       uncle Evans Cooray.

Much to the chagrin of Evans, I was openly critical of President Premadasa while he was in office, unable to resist the urge to contrast his brash and populist leadership style with the more learned and erudite ways of his political rival Lalith Athulathmudali.

In his frustration, Evans cautioned me with words that today are no less true than the inevitability of sunrise at dawn: “Some-day, when there are no more leaders like him, you will appreciate the leadership qualities and commitment of a man like President Premadasa. Today, you are so young and inexperienced that you take them for granted,” he snapped. I was confident that time will prove Uncle Evans wrong. 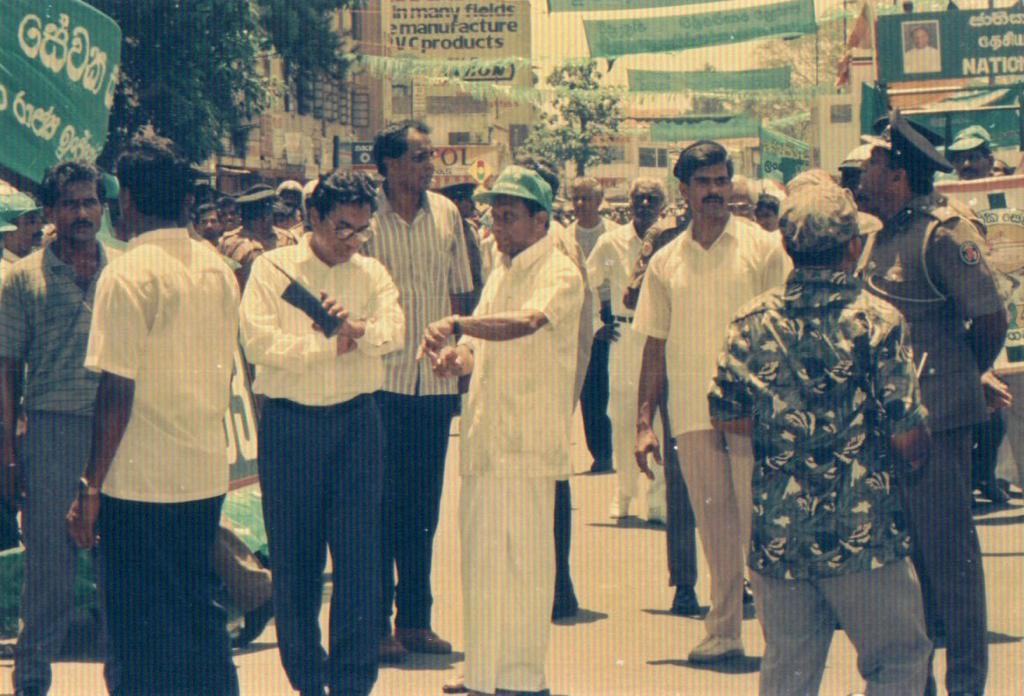 Ranasinghe Premadasa was killed on May Day. He is the only elected executive president to be assassinated. Some would no doubt say that he himself was to blame for one of his glaring errors of judgment was giving arms to the LTTE. The LTTE was not his only enemy. He holds the dubious distinction of being the only President in our history to have confronted a motion of impeachment by Parliament, one which he survived only through the most unprecedented and fortuitous political and constitutional maneuvering. One notes also, that among these firsts there is the fact that he is the last President elected from the United National Party, D.B. Wijetunga’s ascension being procedural consequent to Premadasa being assassinated.

Today, as I reflect on Ranasinghe Premadasa twenty five years after he was killed, the words of Evans Cooray haunt me. They haunt me because I know of leaders and leadership, and I know what’s lacking. When I reflect on such things, I remember Premadasa.

Premadasa was alone among elected presidents or leaders of the United National Party in that he, unlike anyone else, had to struggle for everything he ever accomplished. He did not hail from a political family, nor did he have the benefit of a first-class education. In his era, many held against him what was then known as his “caste”, a snooty reference to his humble roots. As with so many others around the world, it was in these flames of adversity and discrimination that the tenacity, determination and leadership style of President Premadasa were forged.

He saw the promise of the garment industry and made it a national priority for growth, taking radical measures to ensure that a fair share of the spoils of this thriving export industry made it to the villagers and workers whose skill and sweat allowed that industry to thrive. President Premadasa was the architect of the revitalized “Samurdhi” program, which is still today the backbone of our national poverty alleviation effort.

While many can better expound on his accomplishments than I, my intimate relationship with perhaps one of his closest confidants Evans Cooray, has left me with a unique appreciation for how Premadasa accomplished so much in so short a time. 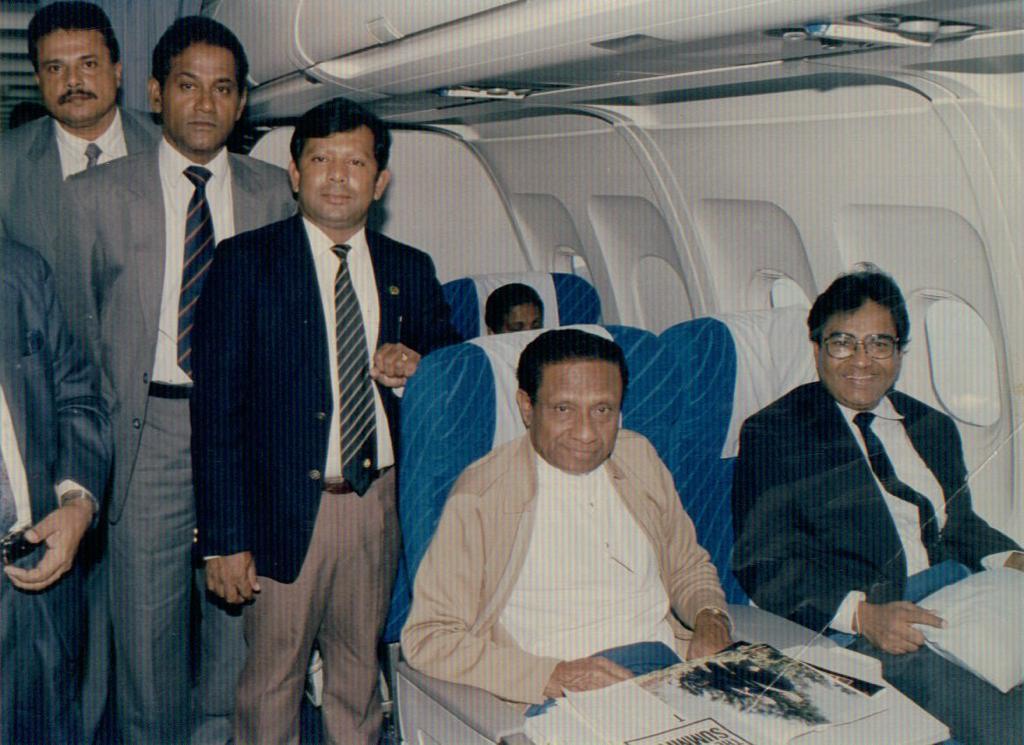 He had an eye for talent, surrounding himself with none but the finest administrators and public servants of his era. He identified and brought into his circle rising stars such as R. Paskaralingam, Bradman Weerakoon, K.H.J. Wijeyadasa, Evans Cooray and Susil Siriwardena. These were dedicated, hard-working and disciplined government servants, who appeared to outsiders to exist for no other reason but to serve the institution of Premadasa around the clock. These are not qualities that they brought to Premadasa, but ones that they shared with him.

Ranasinghe Premadasa believed in discipline and hard work above all else. Rarely did he wake after 3.30am. Whatever he lacked in intellectual capacity and finesse, he sought to make up for with sweat. He knew that discipline involves sacrifice, and eschewed the luxuries and trappings of the presidency to spend his time building a legacy and achieving results. Whenever he was faced with adversity or disapproval, his solution was simply to work harder.

His loyalty to those around him was unparalleled but conditioned on performance, best exemplified by his daily morning phone calls to his closest advisors, which more often than not, were made between three thirty and four thirty in the morning. Every day, he expected progress on his directives from the previous day, and he spared no quarter for his ministers or advisors who failed to perform.

It was this ruthless pragmatism that won him the support of many “doers” in the country. People who could perform and deliver results were drawn to Premadasa, who found room for them in his ranks. Being known as a villager himself, surrounded by the trappings of Colombo, Premadasa prioritized poverty alleviation above almost all else. Under his direction, several amenities that were taken for granted in the capital were brought to villages across the country – from clean water, to pothole-free roads, schools and medical facilities.

As a leader, he held his people accountable for not just results but also for their conduct. Under no-circumstances would he have sanctioned a government where nearly every supporting member of parliament was appointed to the cabinet or given a state or deputy ministerial portfolio. He kept an intimate cabinet and expected the rest of his MPs to focus on delivering in their electorates, ensuring that they had access to the funds and resources to do so.

It is almost amusing to imagine how President Premadasa would have reacted to discovering that a number of his ministers and officials were gallivanting across the world with public funds at the drop of a hat, or spending our tax rupees on expensive furniture and adornments for their ministries and official residences. It is less amusing to recall that during his time, no public servant would have dreamt of participating in such abuses, which have become all too commonplace today.

Never satisfied with any particular accomplishment, Premadasa believed that a government, political party or individual had to keep growing in order to succeed. Not comfortable resting on his accolades, and despite lacking the formal educational background of most of his predecessors, he constantly struggled to adapt and surmount newer and greater political challenges.

As a man who struggled a great deal in his life, Premadasa was objective and practical. He had extraordinary determination. He believed that if you could see something in your mind, you could hold it in your hand. He never ever gave up. He was a tough man to work for but he would stand by his team members in a way no other leader would; thus did he secure their loyalty.

President Premadasa had a way with words. He was a disciplinarian who was effective because he was so disciplined himself. No president and no leader since has followed up on matters he had delegated to ministers and officials and agencies in the way he did. This is how, after being at the helm of government and the UNP for only four years, Ranasinghe Premadasa came to be recognised as a kind of demi-god by the country’s rural masses; and as the man who single-handedly lifted millions of Sri Lankans out of poverty and brought them dignity and hope.

Ranasinghe Premadasa had extraordinary energy, determination and skill. Indeed, in the words of Evans Cooray himself, Premadasa was not a man, but “an institution”.

Many years ago I did not have much regard for Ranasinghe Premadasa. Today, when I reflect on that fateful May Day in 1993 and what followed, I remember what Evans Cooray told me. If I made my uncle turn in his grave over my opinions of Ranasinghe Premadasa, I am convinced he will now rest in peace. He will rest in peace because today I am able to say with full conviction, that he was right.